A new geological study that focused on areas of the Anadarko Basin in Oklahoma shows that differences in density between underground water and wastewater from oil and gas drilling injected into the ground corresponds with continued earthquakes long after the drilling stops. 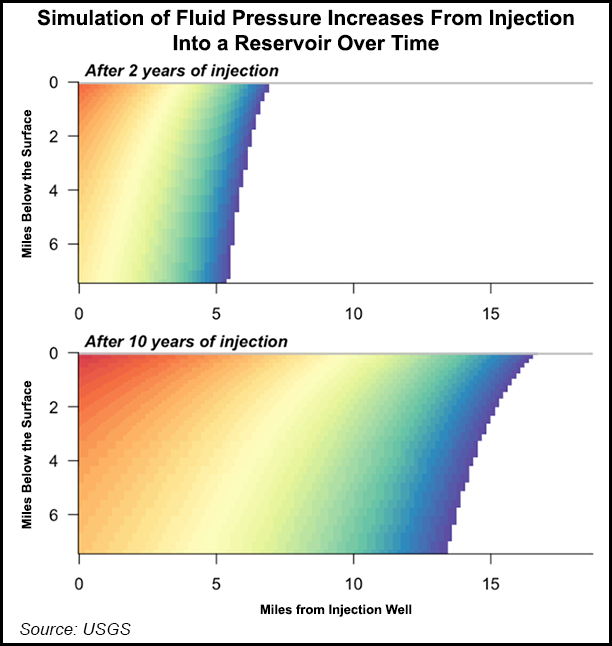 The study was funded by a grant from the U.S. Geological Survey (USGS), which reported research in 2012 that found a correlation between wastewater injection sites and seismicity.

In the latest research, the study advances on previous findings into the correlation between the injection of wastewater produced in unconventional oil and gas drilling into underground saltwater disposal wells.

Researcher Ryan Pollyea focused on the Precambrian Basement formation and the Mississippian Lime formation, which partly overlaps the Anadarko Basin in northern Oklahoma.

The research reviewed the correlation between seismic activity and areas underground where injected wastewater confronts existing “host-rock water,” proposing that differences in density between these two fluid types may cause increased and protracted seismic activity as the wastewater sinks deeper into the ground over the course of many years.

The study contends that earthquakes correlating with fluid density differences can last for up to 10 years after drilling activity has ended.

This new angle on the cause of seismicity could inform earthquake mitigation strategies, something Kansas and Oklahoma regulators have been working toward since 2015.

The Environmental Protection Agency (EPA) in 2013 took on the task of researching the relationship between seismic activity and oil and gas drilling, as well as wastewater disposal. The EPA said at the time preventative measures were still prudent, even if an absolute link had not been established.

Some jurisdictions in North America have enacted or proposed moratoriums on hydraulic fracturing (fracking) activity in response to earthquakes and tremors as recently as this year.

Regulators in Oklahoma last November ordered Roan Resources Inc. to halt completion operations at an oil well after the Midcontinent region was struck by a 3.4-magnitude earthquake. And in May, a pair of central Alberta winter quakes triggered a ban against fracking in deep oil and natural gas wells around a power dam and reservoir 144 miles southwest of the provincial capital in Edmonton. The British Columbia Oil and Gas Commission took similar steps in December following two November earthquakes.