In its first few months of service, the Rover Pipeline has opened up a route connecting Marcellus and Utica shale natural gas to liquefied natural gas (LNG) exports at Cheniere Energy Inc.’s Sabine Pass terminal, and it’s shifted how gas flows between Appalachia and the Gulf Coast in the process, according to RBN Energy LLC. 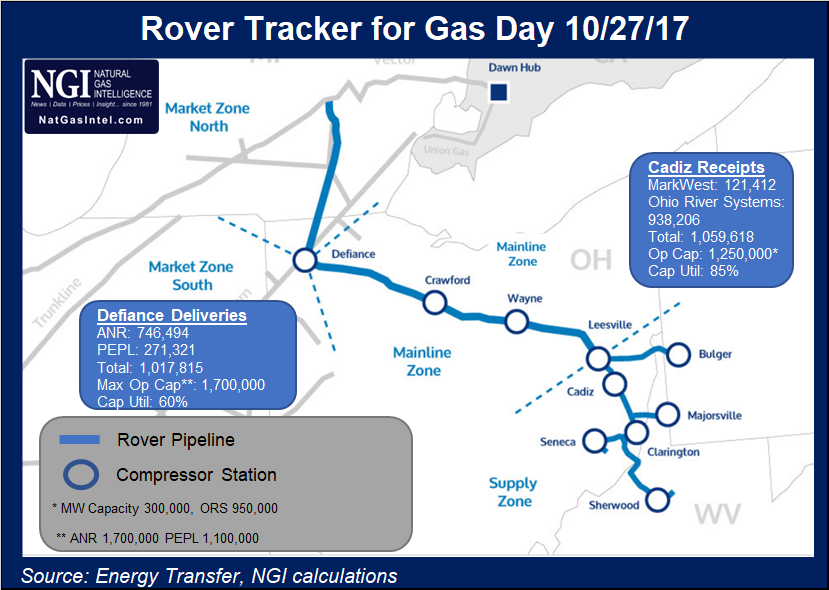 Rover, sponsored by Energy Transfer Partners LP, began initial service on Sept. 1 on Mainline A between Cadiz, OH, and Defiance, OH, and has been transporting around 1 Bcf/d east-to-west, most of it delivered onto TransCanada Corp.’s ANR Pipeline.

Following the flow data, “either directly or indirectly” gas is moving from Rover to ANR and “is making it all the way south to the Gulf Coast,” specifically to Cheniere’s export terminal at Sabine Pass, RBN’s Sheetal Nasta said in a recent note to clients.

“Deliveries to the facility have climbed to nearly 3 Bcf/d in recent weeks as the fourth liquefaction train was brought online,” Nasta said. “Along the way, the Rover-ANR combo is increasing competition with other pipes that feed ANR, including other Marcellus/Utica takeaway pipelines such as” Rockies Express Pipeline (REX) and Dominion Transmission.

Nasta said gas flowing directly into Sabine Pass from Transcontinental Gas Pipe Line (Transco) via the Gulf Trace lateral has picked up in recent weeks, increasing to 860 MMcf/d, about 33% of the facility’s total intake. This is in addition to deliveries from Transco to Cheniere’s Creole Trail Pipeline.

“Between the Gulf Trace lateral and Creole Trail, Transco’s share” of gas flowing into Sabine Pass “has climbed to nearly 1.3 Bcf/d,” accounting for around half of the facility’s total supply.

This comes as Transco’s Zone 3 — roughly the portion of the pipe that runs through Louisiana — has flipped to moving gas east-to-west from a null point at Station 50 near Evangeline Parish, LA. Transco Zone 3 used to flow eastward through Zone 3 at around 0.5 Bcf/d net, but has shifted to flowing more than 1 Bcf/d westward starting around Station 50 and heading “toward the Transco laterals feeding Sabine Pass,” according to Nasta.

“Not coincidentally, Station 50 is where a confluence of other long-haul pipelines interconnect with Transco. These include ANR and TransCanada’s Columbia Gulf Transmission (CGT), and Boardwalk Partners’ Texas Gas Transmission (TGT). Also nearby is Plains All American’s Pine Prairie gas storage facility, which interacts with that Transco interconnect as well,” she said. “Transco’s net receipts from these systems in Evangeline Parish, LA, have more than tripled over the past couple of years, from less than 500 MMcf/d to nearly 1.5 Bcf/d, with a good bit of that increase happening in recent months. These receipts are then moving west and south to the Gulf Trace lateral and into Sabine Pass.”

Nasta said it’s “also not a coincidence” that ANR, CGT and TGT — north-south long-haul pipes that have been reversing flows to accommodate the Marcellus/Utica — “criss-cross” with Appalachian takeaway pipelines like Rover and REX.

“Not surprisingly, the growing LNG export demand combined with the addition of takeaway capacity and flow reversal projects are disrupting flow patterns on these connected pipes and increasing competition for transportation capacity moving gas to the Gulf Coast,” she said.

Since Rover began flowing on Mainline A, ANR northbound flows have dropped, including cuts to northbound volumes from interconnects with REX and Dominion. Meanwhile, southbound flows on ANR “since Sept. 1 have climbed 60% to an average of over 700 MMcf/d, from about 450 MMcf/d in August.” These volumes are finding their way south to the Perryville Hub in Louisiana and eventually to ANR’s interconnect with Transco, according to Nasta.

Coinciding with this uptick in ANR southbound flows, receipts onto ANR at Perryville, LA, have decreased, as have volumes coming from the Midcontinent.

“While these shifts aren’t earth-shattering, especially on the southern end of the system, they signify a trend that will only deepen as Rover completes subsequent phases of its project and ramps up to the full 3.25 Bcf/d of capacity,” Nasta said. “We can already see competition heating up between Rover and REX and some of the other receipts that normally get absorbed by ANR. That will only intensify as Rover fills up. Regardless of who wins, however, it looks like Rover, in combination with ANR, has certainly increased Marcellus/Utica producers’ stake in the game.”

In a recent webinar, RBN CEO Rusty Braziel predicted that, given the concentration of incremental demand growth from LNG and exports to Mexico, production will increasingly compete for limited capacity to the Gulf Coast and create widening basis differentials outside the region.

Energy Transfer plans to bring Rover’s full designed capacity into service by the end of the first quarter. Phase 1B, including the completion of a supply lateral delayed by a FERC moratorium on horizontal directional drilling, is slated for completion by the end of the year. After receiving a certificate from the Federal Energy Regulatory Commission, Energy Transfer has been operating on a tight schedule to construct the 713-mile mega project.