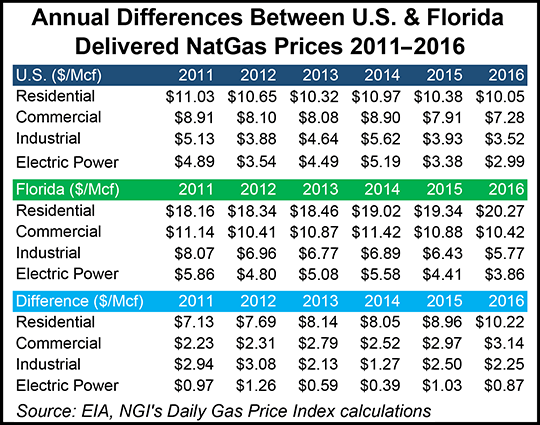 The RNG program was authorized for Peoples Gas System, which would be the first utility in the state to offer biogas producers the option of delivering RNG through the utility distribution pipeline system, similar to action taken in other states.

Peoples had been contacted by landfill operators and wastewater treatment plant owners that want to deliver RNG into the gas utility distribution system. RNG is processed to meet pipeline quality standards.

Sources of RNG are found in the municipal solid waste, livestock manure and agricultural waste generally, in addition to wastewater plants and landfills. It has seen increased demand as a near-zero emission vehicular fuel and a low-carbon source of energy for various commercial operations.

Peoples officials indicated that biogas producers may either use RNG onsite or contract with a customer to buy the RNG.

The PSC noted that there are several RNG projects in development, such as waste-to-energy requests for proposals (RFP) issued in Hillsborough, Polk and Volusia counties and the city of St. Petersburg, seeking to capture methane emissions and/or flared gas supplies.

More states are pushing to allow RNG to be integrated with geologic natural gas and to boost the production.

The national RNG Coalition has discussed with Florida PSC staff about the Peoples Gas approval, such as a requirement that RNG have a heating value of at least 1,000 BTUs, which is problematic for biomethane, according to a coalition spokesperson. Requiring this high a heating value has been a concern in other states, he said.

The RNG coalition last year intervened in a similar case in North Carolina involving Piedmont Natural Gas, the spokesperson said. As a result of amendments to the filing, “we expect a faster rate of RNG project development from North Carolina’s abundant organic feedstocks than otherwise would have occurred.” He said the coalition expects to remain active in the Florida process to resolve the BTU issue and other concerns.

A model set of RNG specifications promoted by the coalition calls for heating values to be between 950 Btus and 970 Btus with a minimum methane content of 94%. The composition of pipeline-quality geologic natural gas is 95% methane, 4% ethane/nitrogen, and 1% carbon dioxide.