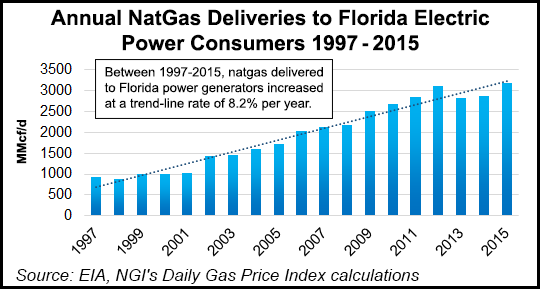 The $1.2 billion plant entered commercial operation April 1, two months ahead of schedule and under budget, according to FPL CEO Eric Silagy.

“The Port Everglades Next Generation Clean Energy Center is yet another demonstration of our commitment to dramatically reducing our dependence on foreign oil, while at the same time, delivering clean, reliable and affordable energy for our customers. This facility is the equivalent of taking a car from the 1960s and replacing it with a hybrid, which is more fuel efficient and produces less emissions.”

The Port Everglades facility, running on 35% less fuel per megawatt-hour, will save customers an estimated $400 million during its 30-year lifespan, FPL said.

Florida regulators recently approved a rate cut for FPL customers to start along with the commissioning of the Port Everglades Next Generation Clean Energy Center (see Daily GPI, March 2).

The Port Everglades facility is one of a number of gas-fired power projects planned for operation over the next few years in the Southeast, including FPL’s proposed Okeechobee Clean Energy Center Unit 1, a 1,600 MW natural gas-fired, combined cycle power plant, which was approved by the Florida Public Service Commission earlier this year (see Daily GPI,Jan. 6). Assuming federal and state approvals, work on the south-central Florida plant would begin in 2017, with an in-service set for June 2019. FPL plans to invest about $1.3 billion in the in Okeechobee County plant.

FPL serves 4.8 million customer accounts in Florida, a number that it said is expected to increase to 5 million accounts, representing 10 million people, by 2019. Given that growth, and the need to replace aging facilities, the company has forecast a significant need for additional firm power generation beginning in 2019 (see Daily GPI, July 2, 2015).