Hurricane Irma, a catastrophic Category 5 storm that was barreling through the Caribbean on Wednesday, is likely to have some impact on natural gas markets if it strikes the United States, which forecasters were anticipating. 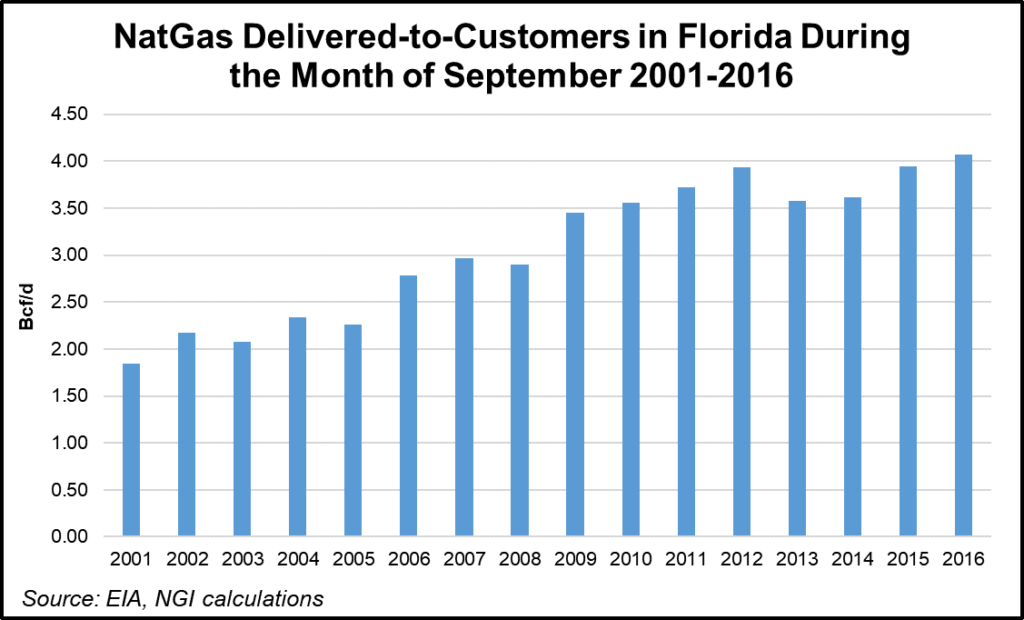 However, with miniscule energy infrastructure compared to the Texas and Louisiana coast, and hurricane-savvy utilities that should be able to restart power at a fairly brisk pace, the impact to gas markets should be minimal, according to Natgasweather.com.

Forecasters said Wednesday Irma’s damage is likely to be extensive, “but to the natural gas markets, they’ve tended to have a bearish stance with the storm due to any potential production being lost more than offset by cooler temperatures and power outages.”

The eye of the Category 5 hurricane passed over Barbuda, St. Barthelemy and St. Martin on Wednesday morning and was moving over portions of the British and U.S. Virgin Islands in the early afternoon, according to the National Hurricane Center (NHC).

Irma at midday Wednesday was about 35 miles east of St. Thomas and 105 miles east of San Juan, Puerto Rico with maximum sustained winds of 185 mph. The hurricane was moving west-northwest at 16 mph.

“A strong high pressure ridge extending from the central Atlantic westward is expected to keep Irma moving west-northwestward during the next two to three days,” forecasters said. “The track guidance is in good agreement during this period…” Irma then should turn northwestward and northward, “but there is still a fair amount of uncertainty regarding the exact timing and location of recurvature.”

Because Irma is tracking over warm waters for the next three to four days, it likely will “remain a very powerful hurricane during this time, and the NHC intensity forecast is unchanged from the previous advisory through day four…”

BP plc on Wednesday was taking every precaution for the dangerous storm, evacuating nonessential personnel from the Thunder Horse platform in the deepwater Gulf of Mexico. However, production was not shut in. The Thunder Horse platform, which sits in more than 6,000 feet of water, initially began producing in June 2008. Gross production capacity is estimated at 250,000 b/d of oil and 200 MMcf/d of natural gas.

“With forecasts indicating potential impact this weekend in Florida and possibly later along the southeast Atlantic Coast, BP now is taking additional steps to respond,” a spokesperson said.

Cynthia Muir, spokeswoman for the Florida Public Service Commission, told NGI on Wednesday that the agency is not expected to begin reporting outage or restoration information until Friday or Saturday.

“Despite the fact that last year, FPL customers in Central and North Florida were significantly impacted by hurricanes Hermine and Matthew, we estimate that approximately half of the nearly 10 million people we serve, particularly in the tri-county area, have yet to experience a hurricane, much less a major one, since 2005,” said FPL CEO Eric Silagy. “Hurricane Irma is a very powerful, dangerous and unpredictable Category 5 storm that has the very real potential to impact Florida, and we are taking every possible action to ensure we are ready to respond. This includes preparing to move our workers and equipment to the areas most likely to be affected.”

Spokesperson Cherie Jacobs said the company was preparing its facilities and yards for inclement weather. The company is also prepared to handle any customer issues that might arise as a result of the hurricane, she said.

TECO operates 11,000 miles of natural gas mains in Florida. While the company said it might have to shut off some customers’ service, it advised customers not to do so on their own even in the event of an evacuation.

National Guard At The Ready

In preparation for Irma, Scott on Wednesday activated 900 members of the state’s Army and Air National Guard, joining 100 guard members activated on Tuesday. Scott’s office said the guard’s 6,000 remaining members would be deployed before Friday morning to assist with planning, logistics and operations in advance of impending landfall.

Scott declared a state of emergency covering all of the 67 counties on Monday.

“Hurricane Irma is an extremely dangerous and life-threatening Category 5 storm and the state is aggressively preparing to ensure families are safe as we prepare for a possible landfall,” Scott said Wednesday. “The brave men and women of the Florida National Guard are incredibly important to executing emergency preparedness and response actions across the state and I will continue to activate more members as needed.”

Meanwhile, Tropical Storm (TS) Jose, swirling through the eastern Atlantic, was expected to strengthen to hurricane status later Wednesday. Jose’s current track forecast keeps it over water for the next few days before potentially making landfall in the Lesser Antilles this weekend. TS Katia, which formed early Wednesday in the southwestern Gulf of Mexico, also is expected to strengthen into a hurricane on Thursday or Friday before making landfall in mexico in Veracruz this weekend.