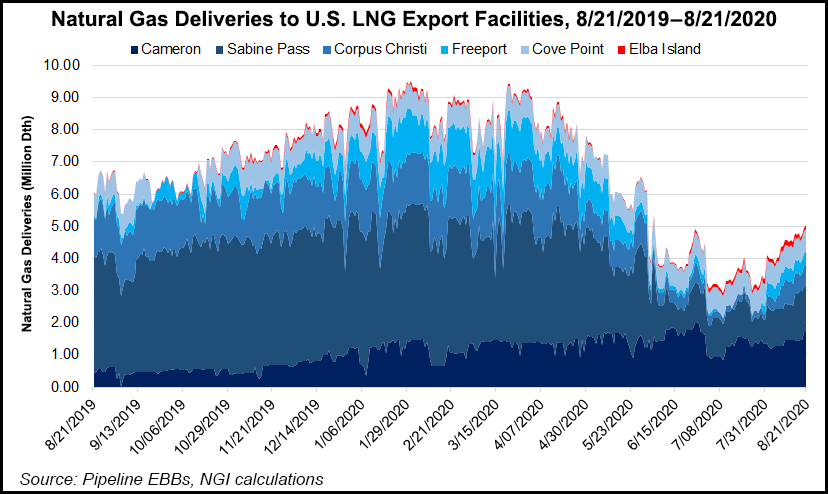 “We do see July and August as the peak cancellation months and expect a gradual decrease in cargo cancellation and thus a recovery to some export growth in the fourth quarter,” CEO Oystein Kalleklev said during a second quarter earnings call.

Management expects a “substantial reduction” in U.S. LNG cargo cancellations in the near term to help meet winter demand in the Northern Hemisphere, he added.

About 270 cargoes are expected to be canceled globally this year, Kalleklev said. Unlike most plants around the world, U.S. LNG operators allow long-term customers to cancel cargoes as long as they provide proper notice and pay their respective liquefaction fees of $2.25-3.50/MMBtu. Egypt is expected to account for many of the remaining cancellations.

About 165 U.S. cargoes have been canceled through September, Kalleklev said, and about 35 likely are to be canceled in 4Q2020. A typical cargo is equivalent to about 3.5 Bcf.

Feed gas to U.S. LNG export plants fell to an average of 3.1 Bcf/d in July from a peak of 8.0 Bcf/d in January, the U.S. Energy Information Administration said recently.

Starting next month, even if customers cancel U.S. cargoes the owners of the respective LNG plants may still produce and market them on their own. Those supplies could “end up in floating storage, playing the contango time spread instead,” Kalleklev said. “You can actually play the time spreads where you’re buying, let’s say, September cargoes and selling — sailing and then maybe floating a month and selling into a much higher November price.”

Since a small amount of LNG evaporates from storage containers in ships, floating storage for longer than a month is atypical because of the economic risks. About 35 ships were used for floating storage in each of the past two winters and “we think it probably will be higher this year,” Kalleklev said.

Reduced global gas demand from the Covid-19 pandemic caused spikes in floating storage this year during months when there is typically little floating storage, he said. There was a spike in February because of Chinese lockdowns, and then in the summer about 50 ships holding a combined 3.5 million metric tons were at times used for floating storage, waiting for prices to increase.

“It’s unprecedented that we see that many ships in floating storage during the summer months, and this is more a reflection of disruption and weak demand,” Kalleklev said. As prices have recovered, the current number of ships being used for floating storage has fallen to a seasonal norm of 13, he said.

Low LNG prices and recovering European carbon prices this summer incentivized the “hoarding” of LNG through storage, Kalleklev said. In June, the UK set a record of going 67 days, 22 hours and 55 minutes without consuming any coal power, he added.

Higher prices this winter could spur LNG re-exports from Europe to Asia, but arbitrage opportunities may depend on the direction of winter weather, Flex management said.

Spot LNG shipping rates “stayed weak over the spring and summer due to the fallout from the Covid-19 pandemic,” Kalleklev said. Flex earned an average time charter equivalent (TCE) of $46,588/day in the second quarter, which was in line with breakeven levels. That was 31% less than the 1Q2020 average TCE of $67,740/day but roughly flat to the year-ago figure of $46,266.

Golar LNG Ltd. said earlier this month shipping rates were likely to drop through September, but the longer term outlook has improved.

Flex has a mixed portfolio of ships under longer-term contracts and ships on the spot market. With an expected uptick in the spot LNG shipping market and the expectation of “massive” floating storage for this winter, Kalleklev said the company is well positioned. “For floating storage, we have the best ships as our ships are large with very low levels of boil-off from the cargo tanks, thus for serving maximum cargo deliveries.”