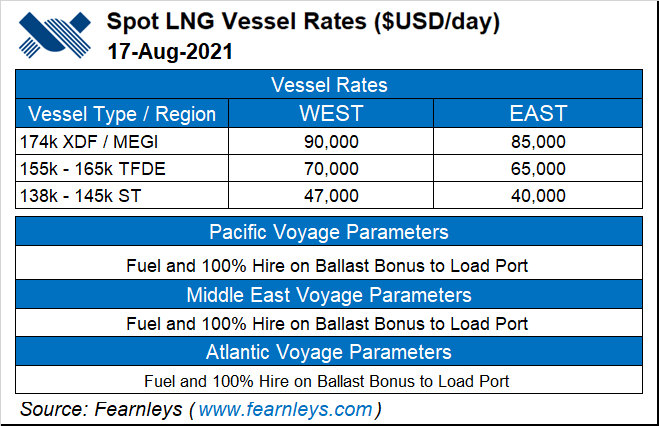 “This illustrates that market participants expect spot rates to move further upwards,” Kalleklev said during the 2Q2021 earnings call. He noted there was a “willingness” to pay a premium to spot rates for one-year and six-month contracts.

“As LNG has become pricier, the advantage of having large fuel efficient ships” is also becoming more apparent, he said. The one-year rate spread between the standard vessels and newer models is around $22,000 and it could go higher, he noted.

Newer carriers could also get a boost from plans by the European Union (EU) to include shipping in its carbon trading scheme. Older, higher-emitting vessels that are steam-powered could get pushed out, allowing shipowners with newer fleets to pounce on the market.

“That the EU decided to add shipping to its carbon trading scheme will further put” steam-powered ships “at a disadvantage compared to new modern tonnage,” Kalleklev said.

That means newer vessels that were already expected to have an advantage following the adoption of stricter emissions rules by the International Maritime Organization (IMO) could be more attractive in the future.

“However, keep in mind that Europe is only about 20% of the LNG import demand,” Kalleklev said. “Asia is the big import region where we also see more or less all the growth going forward.” He added that less efficient ships could be contracted for short-haul use within the Asia-Pacific region.

Flex reported strong chartering activity during the period, and it provided more details on six long-term contracts announced during the quarter. Four contracts were with Cheniere Energy Inc., which has already taken delivery of three vessels: the Flex Endeavour, the Flex Vigilant and the Flex Ranger.

The Endeavour, delivered in April, and the Ranger, delivered earlier this month, are to work for Cheniere until early 2025. The newbuild Vigilant, delivered in May, has a firm term until 2Q2024. The fourth vessel is scheduled to be delivered to Cheniere in 3Q2022 with a firm period set to end in 1Q2026. Cheniere has options to extend each vessel by up to two years.

The other agreements during the quarter include a fixed-rate time charter for the Flex Freedom signed with an undisclosed “large Asian-based energy company.” The charter started at the end of April and is set to end in 1Q2022. Soon after, the same vessel is set to start working for another undisclosed LNG portfolio player on a term for up to five years “in direct continuation of its existing time charter,” according to Flex.

Also during the quarter, Flex entered a fixed-rate time charter agreement with an unnamed international trading house for the Flex Constellation. The contract term began in May and is scheduled to end in 2Q2024, with options to extend by up to three years. Flex also reported that an international energy major, also undisclosed, had extended the variable rate time charter for the Flex Amber by one additional year.

In addition to the charters, Flex has one ship trading spot cargoes and three on variable hire, giving it exposure to the general market.

The delivery of the Flex Vigilant marked the end of Flex’s $2.5 billion newbuild program. “We might invest in new ships in the future, but at the moment we have no plans to do so,” Kalleklev said.

“As ships are rolling onto new contracts, we do expect revenues to grow steadily in the second half of the year,” to around $80 million, Kalleklev said.

The company increased its share buyback program by $1 to $15/share. The company said it had repurchased about 900,000 shares for around $9.22/share. The board has also declared a cash dividend for the second quarter of 40 cents/share.