As basis differentials erode with new pipeline expansions and reversals coming online, 2017 could see capacity markets shift to increasingly shorter- or longer-term trades, according to new analysis from Skipping Stone and Capacity Center. 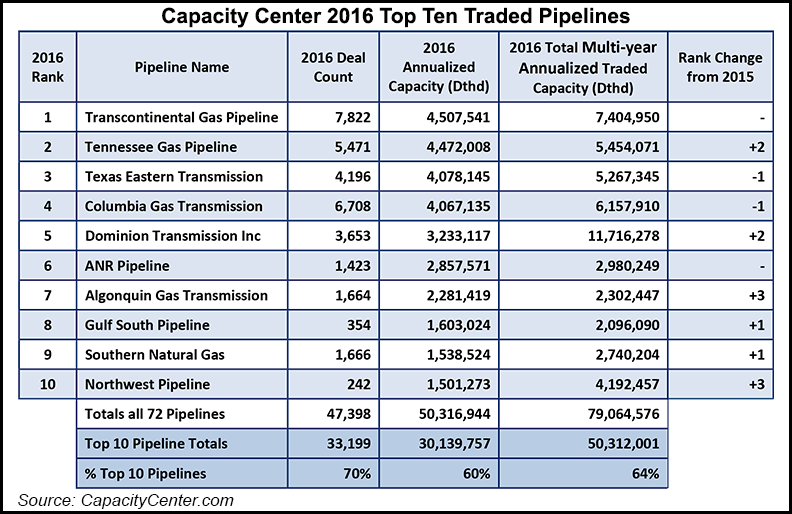 “There are trends, we believe, underway that will take more time to analyze, but as basis begins to go flat across the basins of the country, it will be interesting to see if the market responds by going short or going long,” Skipping Stone President Greg Lander told NGI. “There’s no indication today of a dominant trend that will erupt. We see something’s happening, but we don’t know which fork in the road it will take.”

As basis differentials shrink, traders may opt to lock in forward prices in deals that don’t take effect until months from now, or they may look to capitalize on short-term opportunities in the spot market. It also remains to be seen how capacity traders will respond in terms of the duration of their deals.

“Both of those will tell us people’s views of capacity prices,” Lander said.

There were 88 companies making capacity trades 60 days or more from the effective date in 2016, with the average for the group being 222 days in advance. The annualized volume of those deals was 3.63 Bcf/d, compared to 1.93 Bcf/d for deals effective 30-59 days from the trade date. The firm said its data shows that just over 10% of all capacity traded in 2016 changed hands more than 30 days prior to the release of the capacity.

“We can conclude from this that top traders are more actively seeking out release deals prior to their hitting the spot capacity market,” the firm said.

This year Capacity Center made some tweaks to its methodology for ranking the top capacity traders. Besides switching from a partial to full year’s worth of data, for 2016 Capacity Center decided to report each company’s total traded capacity on an annualized basis, in part to normalize the effects short- and long-term deals had on the numbers, according to Lander.

“We found that there were a number of companies that would opportunistically have a couple of very large deals but for very short periods of time, and it was skewing their apparent presence in the market against those who had lots and lots of fives and tens who controlled them for longer periods of time,” he said.

On an annualized basis, the top 5 capacity traders in the 2016 rankings remained largely unchanged from 2015. Independent energy firm Tenaska claimed the top spot with 4,776,728 Dth/d of annualized capacity traded across 478 deals. BP came in at number two with 4,530,054 Dth/d across 941 deals.

The top 10 traded pipelines accounted for 60% of all annualized traded capacity in 2016.