Mayors from five cities across the country are joining calls for greater regulatory oversight of the nation’s railways, following a spate of accidents in Canada and the U.S. involving train cars carrying crude oil. 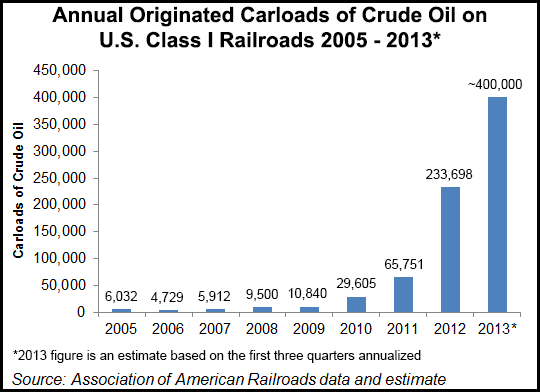 Last week, during the United States Conference of Mayors, Chicago Mayor Rahm Emanuel proposed imposing a hazardous materials freight fee on exploration and production companies that extract crude oil and industrial consumers of the fuel. The group proposed several other measures that Emanuel said would make the nation’s railways safer as the transport of crude oil by train continues to rise with an increase in North American production.

“Freight train accidents across the U.S. should be more than a wake-up call,” Emanuel said in a statement issued after the conference. “Railroads are the backbone of our country, providing an economic lifeline to Chicago and communities across the nation. These incidents must move us to take action so we can strengthen safety standards and employ new technology to prevent future harm.”

Emanuel called on mayors from across the country to join him and the four others who support the proposal. Among them was Philadelphia Mayor Michael Nutter, whose city saw one of the latest accidents on Jan. 20.

Crews are still working on a bridge over the Schuylkill River that runs along a stretch of busy highway near the University of Pennsylvania to clear seven derailed train cars, six of which were carrying crude oil from the Bakken Shale formation to a refinery in the city. No one was hurt in that incident, but as refineries in Philadelphia have experienced a rebirth of sorts, thanks in part to onshore oil and gas production, lawmakers in Pennsylvania are considering holding a hearing in March regarding railway safety as traffic on the state’s lines increases.

Pennsylvania Gov. Tom Corbett, though, has cautioned against any “knee-jerk reactions” that could hinder the additional business refineries in Philadelphia have seen as of late.

Mayors from Wisconsin, Missouri and Illinois also joined Emanuel in supporting the proposals. Revenue generated from any fee, they say, could be dedicated to improving the country’s aging infrastructure.

They also called on the U.S. Department of Transportation to require the construction of safer rail cars and asked that safer railroads be built with better technology. The mayors also proposed that companies transporting hazardous materials on railways carry all the necessary insurance to compensate “for the loss of life and property after an accident.”

In response to the proposals, the Association of American Railroads (AAR) said the industry is already in compliance with many of the suggestions, adding that it has already called on federal regulators to require more stringent specifications for cars that move crude oil (see Shale Daily, Nov. 27, 2013). The AAR also said that $4 billion has been invested by the industry to add more than 60,000 miles of new track nationwide, while noting that many rail companies already carry as much insurance as is commercially available in the marketplace.

“Freight railroads each year invest roughly $25 billion of their own funds into the nationwide rail network so taxpayers don’t have to, and the result is rail infrastructure that is the envy of the world,” AAR CEO Edward R. Hamberger said. “As we’ve seen with other federal tax and fee proposals, the end result is unfortunately that consumers often end up footing the bill.”

But with the U.S. Energy Information Administration projecting that domestic crude oil production will reach 8.5 million b/d by the end of 2014 — up from just 5 million b/d in 2008 — more oil will likely have to travel by rail as midstream companies struggle to meet pipeline demand in oil and gas plays across the country and in Canada.

Emanuel’s proposal came the same day as the U.S. National Transportation Safety Board and the Safety Board of Canada issued a series of recommendations calling for tougher standards on oil-by-rail shipments (see Shale Daily, Jan. 23). The moves come against a backdrop of calls to step up oversight after accidents that occurred last year in North Dakota, Quebec, Alabama and more recently in New Brunswick, where a train carrying liquefied petroleum gas derailed on Sunday — the second time this month that such an accident has occurred in the province.