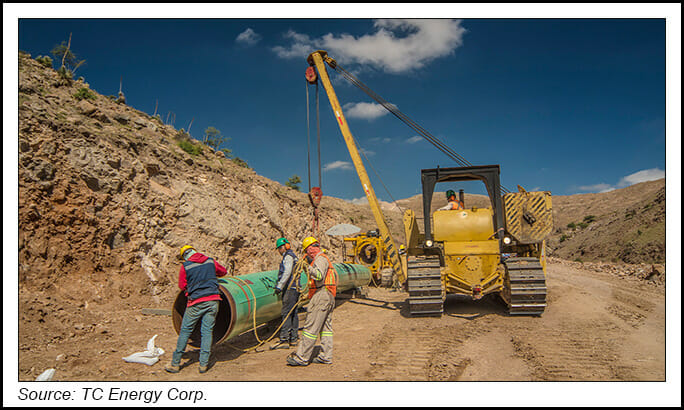 Although investment in Mexico’s energy sector has slowed, the country’s demand for U.S. natural gas continues to rise, and its gas infrastructure continues to grow, albeit in fits and starts. NGI’s Mexico GPI has compiled a list of five pending projects to watch in 2022:

TC Energy Corp.’s long-delayed Tula and Villa de Reyes pipelines, each with a capacity of 886 MMcf/d, will allow increased volumes to flow on the 2.6 Bcf/d Sur de Texas-Tuxpan marine pipeline, which entered commercial service in late 2019.

TC and CFE signed a memorandum of understanding to advance the arbitration proceedings, complete the stalled projects and consolidate their underlying natural gas transport contracts under a single rate agreement with a levelized toll.

TC is aiming to have the Villa de Reyes pipeline fully in-service by mid-2022, “provided we can continue to make progress in procuring access to the final sections of land,” Chapman told shareholders on Dec. 1 during the firm’s annual investor day. As for Tula, TC and CFE are continuing to work on the outstanding arbitration proceedings and are assessing reroute alternatives to complete the project.

Villa de Reyes, in turn, will connect with Tula as well as the already operating Tamazunchale pipeline to supply gas to power generation and industrial facilities in central Mexico.

While the project has not yet been sanctioned, each firm has publicly expressed interest, and each has said that the required capital investment could exceed $4 billion if it goes forward.

The project “will allow CFE to transport natural gas from the basins of the southern United States to the Yucatán Peninsula, supplying existing and new power plants in Mérida and Valladolid as well as the new Trans-Isthmus pipeline, and providing redundancy and operational flexibility to the Dos Bocas refinery in Tabasco,” CFE said last month.

San Diego-based Sempra is targeting first LNG from the project in the port of Ensenada, Baja California state by the end of 2024.

A 12 mmty second phase also is under discussion, along with the 3-4 mmty Vista Pacifico export terminal envisaged for Topolobampo, Sinaloa state.

The first two trains would have a combined capacity of 9.4 mmty.

Sempra remains at an impasse with regard to the Guaymas-El Oro section of its Sonora pipeline system in northwestern Mexico. The pipeline entered service in 2015 but has been out of commission since it was damaged in 2017.

“Subsequently, IEnova and…CFE agreed to extend the service start date multiple times, most recently to March 14, 2022,” IEnova said in its third-quarter 2021 10-Q filing to the Securities and Exchange Commission.