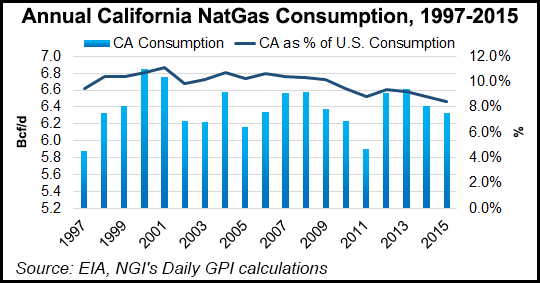 With political pressure mounting to address the issue of transparency at the CPUC (see Daily GPI, June 28), Brown joined a trio of state lawmakers that spearheaded the effort to make changes in the regulatory commission.

Brown acknowledged that the five bills he signed were only part of the reforms he and state lawmakers had sought, so he urged the CPUC to voluntarily go beyond the new laws.

“These important reforms cannot wait another year, so I am calling upon the commission to use its existing authority to take immediate action,” Brown said. “Together, these administrative reforms and legislative acts will bring much needed improvement to the commission.”

Some of the actions the governor is seeking the CPUC to take voluntarily include:

The five bills signed by Brown are aimed at reforming the five-member CPUC and expanding rules related to ex parte communications, improving safety oversight, and helping open and expand the regulatory panel’s proceedings.

SB 215, which was sponsored by state Sens Mark Leno and Ben Hueso, from San Francisco and San Diego, respectively, was hailed by the utility watchdog group The Utility Reform Network (TURN) as a mechanism for cleaning up “the corrupt process that has allowed the utility industry’s preferred access to CPUC commissioners.”

“[These] reforms are a vital first step toward restoring public confidence in the CPUC’s ability to decide crucial issues fairly without bias or undue influence,” said Matt Freedman, a TURN staff attorney.

Leno said his bill’s reforms “will ensure commissioners disclose their private meetings with the utility executives and will result in heavy penalties for those who violate the rules.”

Since the Pacific Gas and Electric Co. San Bruno natural gas transmission pipeline rupture and explosion in 2010, subsequent email scandals involving both PG&E and Southern California Edison Co., and legal actions involving the CPUC and various stakeholders, the state regulatory commission has been under a stream of criticism from consumers and lawmakers (see Daily GPI, June 3, 2015).

The CPUC last summer held an unprecedented public hearing on reforming the five-member regulatory panel’s inner workings, but much of the feedback it received pointed toward proposed legislative reforms (see Daily GPI, Aug. 14, 2015).