Make no mistake, the shale boom is a great thing for the country, but anyone expecting it to yield energy independence is in need of a reality check, according to Fitch Ratings. 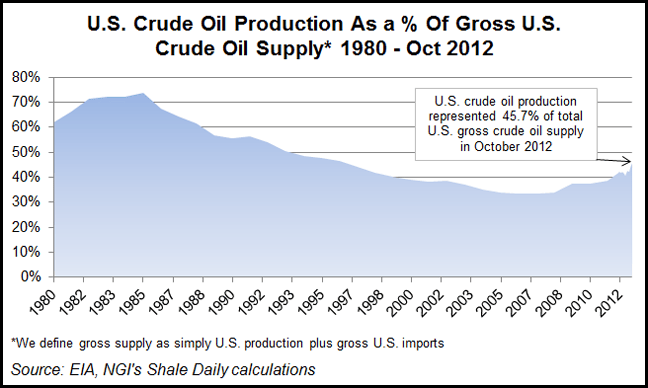 In the new report “Shale Boom: A Boost to Manufacturing but not to Energy Independence” Fitch analysts argue that if shale gas development is allowed to expand, the volumes will add to other comparative advantages in the United States, such as cost of labor, demographics, supply chain security and transportation costs. “Collectively, these factors could incentivize a higher volume of manufacturing to return to the U.S,” Fitch said.

The chemicals, steel, copper, aluminum and cement industries have all been benefiting from cheaper natural gas supplies for fuel and feedstock. In a presentation at the Manufacturing Renaissance Forum in Pittsburgh on Thursday, Bruce Macklin, senior vice president of ExxonMobil Chemical Co., said, “Looking back 20 years, chemicals were our nation’s top export product. But as recently as five years ago, we were on the verge of becoming an importer. Now the industry is back on the path of competitively serving the growth markets of Asia and other parts of the world.”

ExxonMobil Chemical has filed permit applications for a petrochemical expansion at its Baytown Olefins Plant in Texas, where it plans to add an ethane cracker (see Shale Daily, June 4, 2012). The company also plans to add premium polyethylene facilities at its nearby Mont Belvieu, TX, Plastics Plant. “The proposed investment reflects ExxonMobil’s confidence in the natural-gas driven revitalization of the U.S. chemical industry,” Macklin said.

However, Fitch said the return of more sophisticated levels of manufacturing to the United States will be driven more by economic fundamentals and technology than low energy prices.

The United States imports about half its daily consumption of 19 million b/d of oil and is the world’s largest importer and consumer of oil. “Conservation and the shale revolution would not eliminate upward pressure on prices from rising emerging market demand,” Fitch said.

Even as the use of hydraulic fracturing expands, yielding increased gas production, it will not lead to a significant contraction in coal consumption. Fitch said the coal market will rebound once market conditions become more favorable for the solid fossil fuel. “While coal will have a smaller share of the electricity market, it will still be the biggest single source of energy for conversion to electricity,” Fitch said.

Currently, U.S. oil supplies from shales and other tight formations account for about 1.7 million b/d of U.S. crude production, Fitch said. Citing U.S. Energy Information Administration statistics, Fitch said U.S. crude production is expected to increase to 7.5 million b/d by 2019, particularly thanks to shale plays. “These increases, if they occur, will be a welcome boost to the U.S. economy and balance of trade but should not have a significant impact on world oil prices since they are small relative to the total world demand for crude (about 2-3%).”

Of the 4 million b/d decline in imports from 2005 to 2011, Fitch said half came from conservation and half came from increased domestic production. “The contribution of reduction in consumption is often overlooked but in the long run should be more important than the increase in production because the changes in technology (higher auto mileage, for example) are permanent,” Fitch said.

However, the phrase energy independence frequently falls from the lips of politicians and industry executives when they talk about the shale gas and oil bounty. Last year at an industry conference in Houston, John Hofmeister, founder and CEO of Citizens for Affordable Energy and a former president of Shell Oil Co., touted his ideas for foreign oil independence (see Shale Daily, Feb. 23, 2012).

Getting energy regulation out of the hands of entities subject to political whims, driven by the election cycle, would go a long way toward bringing the country’s energy resources to market, Hofmeister said at last year’s NAPE Expo Business Conference. He proposed an “energy Fed,” something like the Federal Reserve, that would be dedicated to managing and planning for the development and use of the country’s energy resources. In the case of the Federal Reserve, politicians “outsourced” the job of managing something they don’t know much about, and Hofmeister said it should be the same with energy.