Summer weather stepped up its game this week, providing momentum to spot gas prices as air-conditioning needs ramped up across much of the country. With highs in Texas and much of the central United States soaring into the 90s, NGI’s Weekly Spot Gas National Avg. climbed 13.0 cents to $2.930. 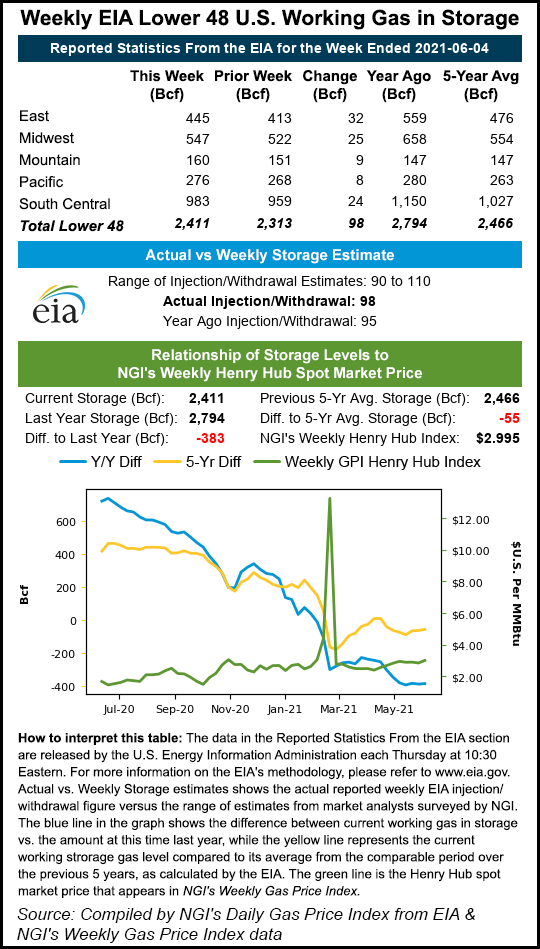 Nymex futures also ended the week sharply higher, led by news that a major pipeline could operate at a reduced pressure on a portion of its system for several months. The July Nymex contract closed the week at $3.296, up 22.6 cents from Monday’s close.

Building heat in portions of the United States did play some role in Nymex gas price strength this week. But the biggest impact was in the cash market side, particularly in the Northeast, which was hot early in the period but in store for a cool front this weekend.

Though the forecast for the East Coast calls for much chillier temperatures over the weekend, a return to summerlike conditions is set to begin in earnest over much of the western half of the country, according to AccuWeather. A northward bulge was forecast to build in the jet stream and allow warmer air to move back into much of the West.

The National Weather Service (NWS) issued an excessive heat watch for parts of southeastern California and southwestern Arizona. The heat watch is set to begin Sunday and continue through at least June 16, with the building warmth expected to become more intense through the early week.

Cheyenne Hub cash prices picked up 9.5 cents on the week to average $2.870. However, with Western markets experiencing mostly comfortable conditions for much of the week, prices at most other locations softened week/week. SoCal Citygate was down 34.5 cents to $3.780, and PG&E Citygate was down 9.0 cents to $3.900.

The weakness extended upstream into the Permian Basin, where Waha spot gas prices slipped a half-cent on the week to $2.780.

As for futures, traders appear to have gotten comfortable with $3.00-plus gas at the front of the Nymex futures curve, and the prompt month even briefly touched $3.330 this week.

The swift move higher occurred overnight Thursday and continued throughout Friday after Texas Eastern Transmission Co. (Tetco) said the 20% pressure reduction it implemented earlier this month on orders from the Pipeline and Hazardous Material Safety Administration (PHMSA) may remain in place until late in the third quarter.

The restrictions were put in place after Tetco reported an anomaly that was identified during recent inspections. PHMSA is working to further understand and evaluate the findings of inspections and how they could impact other Line 10 and Line 15 segments along the 30-inch diameter system.

Tetco indicated that it hoped to provide “a more exact timeframe and potential scope of work by the end of the month.”

With the steep climb in futures largely attributed to the pipeline issues, rather than summer heat or the return of liquefied natural gas (LNG) demand, there is some uncertainty that the rally has staying power since some of the gas that may not be able to flow on Tetco could be rerouted.

NatGasWeather said there have been no major changes to the 15-day outlook, with models generally seeing small fluctuations in each run. Hot conditions are forecast to continue across the central and southern United States, with the strongest heat over Texas and the Southwest making for strong national demand.

However, weather systems are on track to move across the Great Lakes and East in the coming days, with highs expected to struggle to get out of the 60s to mid-80s, according to the forecaster. There will still be very strong regional demand as a dangerously hot upper ridge sets up over the Southwest into the Plains, but these are lower-population states and why national cooling degree days are only near normal to slightly above normal.

Meanwhile, LNG feed gas demand remains well off record highs. NGI data showed deliveries to U.S. terminals sitting at around 9.6 Bcf on Friday, with Cameron and Sabine Pass likely down because of maintenance.

“To our view, there’s been several strong players using any bullish fodder to push prices higher, and this was the latest newsworthy item to give them reason,” NatGasWeather said. “Clearly, bears are frustrated because reasons for gains in prior months were due to strong LNG feed gas and weaker production. But now that LNG remains well off highs” and production recovering to 92 Bcf, “there’s now seemingly a new reason for higher prices.”

Though storage data typically is a big driver of prices, this week’s stat did little to move the price needle much.

The Energy Information Administration (EIA) reported a 98 Bcf injection for the week ending June 4. The figure was firmly in line with expectations but continued to show loose supply/demand balances.

Mobius Risk Group broke down the EIA report and said it illuminated some interesting points. The injection of 98 Bcf was exactly in line with the prior week, which was similar in terms of total degree days but notably different in terms of the composition of heating degree days and cooling degree days. Compared to the same week last year, which also had very similar degree days, the build was 3 Bcf larger.

“We found the most interesting data points in the year/year regional breakdown,” Mobius said.

The combined East and Midwest regions injected 57 Bcf, which was a miniscule 1 Bcf more than the prior-year comparable week. The combined Pacific and Mountain regions were similar with a 17 Bcf build, compared to last year’s 16 Bcf injection. The South Central made it a trifecta with a 24 Bcf build coming in 1 Bcf higher than the same week last year.

“The statistical probability of all three broad regions delivering a uniform 1 Bcf delta is extremely low, and even more unlikely considering the variance in regional weather changes versus the prior year,” Mobius said.

Nevertheless, the firm also has seen stronger revisions to power burns, which combined with the Tetco and storage news, creates the “perfect storm of bullishness.” Bespoke added that the weather pattern also remains biased to the hotter side, despite some brief cooler risks over the next week or so.

“We have felt that price had already detached from the fundamentals, but all of these events mean that may not be the case,” Mobius said. “From a technical perspective, the market is in ‘overbought’ status and due some degree of a pullback, but confidence is low all around right now, so it feels safer to let the smoke clear and wait for a clearer play to take shape.”

Prices across the Midcontinent and into the Midwest picked up mostly between 10.0 and 20.0 cents for the three-day period, while gains were smaller farther east. Texas Eastern M-3, Delivery spot gas prices rose 2.5 cents to $2.085.