It was a wild and wacky four-day week of natural gas trading to finish February, and when the smoke cleared Thursday afternoon, several regions of the country had posted double-digit gains, but others were down by multiple dollars. The NGI Weekly Spot Gas Average fell 33 cents to average $5.45, heavily influenced by losses in the Midwest of $2.29 to average $4.91. 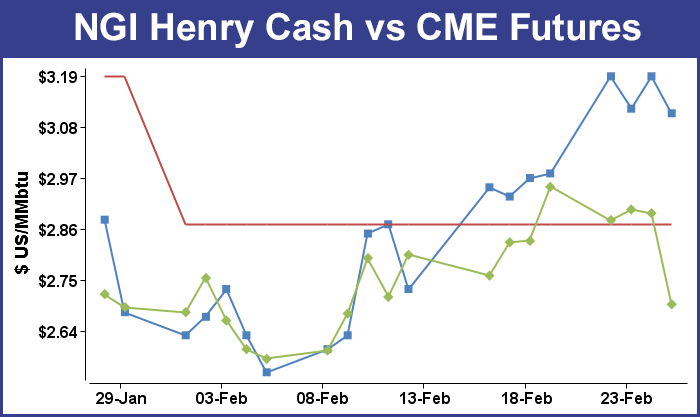 Every market point in the Midwest suffered dollar-plus losses, but every market point in East Texas, South Texas, South Louisiana, the Rockies and California posted gains. The Rocky Mountains showed the greatest Monday-Thursday gains, adding 26 cents to $2.86. The individual market point showing the week’s largest rise was Tennessee Zone 6 200 L, which added $8.73 to average $25.04, and the point suffering the greatest decline was Transco Zone 6 non-NY dropping $16.68 to average $16.58.

Thanks to a round of moderating temperatures, both the Northeast and the Midcontinent dropped 65 cents on the week to average $11.19 and $3.51, respectively.

Outside of the Rockies, Texas proved to be the week’s greatest gainer, with South Texas rising 23 cents to $3.03 and East Texas gaining 24 cents to $3.06.

April futures fell into the losing camp dropping 27.5 cents to $2.697 from Monday through Thursday, and much of that came about following the release of storage data Thursday, which caught a number of traders off guard. For the week ended Feb. 20, the Energy Information Administration (EIA) reported a decrease in gas storage of 219 Bcf, well below trader expectations, and April futures fell to a low of $2.723 after the number was released. By 10:45 a.m. EST April was trading at $2.738 down 12.4 cents from Wednesday’s settlement.

Prior to the release of the data, analysts were looking for a decrease in the 240 Bcf area. A Reuters survey of 23 traders and analysts showed an average 241 Bcf with a range of 230-257 Bcf. Analysts at ICAP Energy were looking for a 234 Bcf pull, and Bentek Energy’s flow model predicted a 233 Bcf withdrawal.

Analysts were scratching their heads as to why last week’s brutal cold didn’t have more of an impact. “The net withdrawal of 219 Bcf was at the bottom of the range of expectations, implying a smaller than expected impact from last week’s cold temperatures,” said Tim Evans of Citi Futures Perspective. “This will also warrant a bearish revision to the forward storage outlook. The draw was still more than the 130 Bcf five-year average for the date but disappointing on a weather-adjusted basis.”

Inventories now stand at 1,938 Bcf and are 576 Bcf greater than last year and 30 Bcf below the five-year average. In the East Region, 141 Bcf was withdrawn, and the West Region saw inventories decrease by 4 Bcf. Stocks in the Producing Region declined by 74 Bcf.

In spite of the sub-par 219 Bcf withdrawal seen in the EIA inventory report, analysts sense a shift in the supply demand balance such that burdensome injection season supplies are off the table.

“Late-breaking winter weather is draining natural gas inventories at a pace comparable to last year, with a significant deficit to the five-year average likely to emerge by the end of March,” said Teri Viswanath, director of natural gas trading strategy at BNP Paribas. “To be sure, we now see end-of-season inventories falling to just 1.48 Tcf compared to the 1.7 Tcf predicted last month or a 175 Bcf deficit to the five-year average.

“Such an unanticipated reduction in inventories might naturally be expected to spur a recovery in prices. However, with the end of winter and looser balances around the corner, the market appears preoccupied with domestic production growth and the prospect of a ‘summer of oversupply. We disagree. With more room to accommodate surplus supplies this summer, concerns that the industry will test physical storage limits is misguided. Further, the pace of refilling the more significantly drained storage facilities might actually disappoint.”

Thursday’s cash market trading for Friday and Saturday delivery saw physical traders attempting to get their deals done early prior to the EIA natural gas inventory report. In this case Thursday’s broad market collapse may have been precipitated by April futures opening nearly a nickel lower, well before the inventory report.

If sellers needed further encouragement, futures continued lower up until the EIA report.

Multi-dollar losses were seen in the Mid-Atlantic and Northeast, but stout double-digit losses were posted in the Midwest as well. Only a handful of lightly traded points made it to the positive side of the trading ledger, and the average overall decline was 77 cents to $4.92.

AccuWeather.com saw a warming trend settling in for Minnesota. “Though the weekend will continue the stretch of cold conditions for the Twin Cities, temperatures will be on a rising trend early next week. Skies will remain dry and sunny for the next several days,” said AccuWeather.com meteorologist Dan DePodwin.

“Temperatures will rest in the low teens, continuing the stretch of biting cold conditions. Normal temperatures for this time of year are in the low 30s, a threshold the city has not met since Feb. 11. However, as February comes to a close, moderating temperatures will bring daytime highs into the average range, [and] though a storm system tracks close to the city late in the weekend, the snow will stay to the south. The storm will usher cloudy conditions for Sunday.

“Temperatures will begin to trend upward at the beginning of the workweek and could reach into the low 30s. A system may bring some snow to the region into Monday night,” DePodwin said.

In the Marcellus region, setbacks were not quite as severe. Next-day deliveries to Transco Leidy fell 16 cents to $1.42, and gas on Tennessee Zone 4 Marcellus gave up 13 cents to $1.37. Gas on Dominion South fell 41 cents to $2.46.

Reports of rapidly expanding production didn’t help the bullish cause either. Industry consultant Genscape detailed higher well counts and more production from the Utica Shale play in southeastern Ohio. “Since the beginning of the year, well counts in Ohio’s Utica have increased by 134 total, with 109 new producing wells,” the company said in a Thursday morning report.

“Harrison County has had the highest jump in producers overall, with nearly a third of all new producing wells (+32), followed by Guernsey County (+19). Guernsey, while trailing in producing numbers, has showed the most activity this year in well completion, putting 29 wells into drilled-but-not-producing inventory. Carroll and Harrison both have extensive inventories as well, with 67 and 69 wells, respectively.

“Wells completed but not currently producing in Harrison, Jefferson and Belmont counties are of extra interest as Regency Energy Partners is building the Utica Ohio River Project, which is a 52-mile, 36-inch [diameter] gathering trunkline with at least 2.1 Bcf/d capacity, initially delivering to TETCO (2Q 2015) and later into REX (3Q 2015). A lateral from the line in Jefferson will connect to the Cadiz processing plant’s tailgate in Harrison county, increasing options for processed gas to get to market.”

Overnight weather models showed more variability along with indications of moderation in key population centers. “[Thursday] offers a recently relatively rare lower demand change thanks to warmer changes on the guidance consensus for next week in the East and South along with more variability showing up in the 11-15 day period,” said Matt Rogers, president of Commodity Weather Group, in the firm’s Thursday morning report. “Next week is still very tricky as the models struggle to navigate through various pieces of storm energy that translate across the U.S. Tight temperature gradients will be challenging between the South and North next week and our temperatures may continue to fluctuate.

“Cold air coverage is still the strongest, though, such that next week still runs colder than normal nationally. Otherwise, we see more pattern variability for the second week of March with many areas trending toward near-normal temperatures for the 11-15 day time period, but colder risks continue to loom larger than warmer ones, thanks to continued ridging near Alaska and even hints of new ridging around Greenland late in the 11-15 day.”