Global exploration should return to substantial profitability in 2017 following five years of single-digit returns, according to an analysis by Wood Mackenzie. 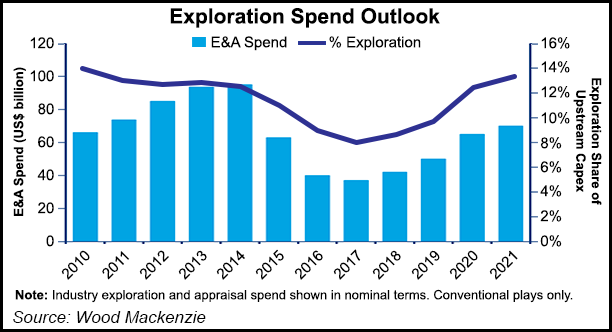 The energy consultant is forecasting a better year for global oil and natural gas exploration after the sharp contraction and few discoveries.

“The industry has a good chance of achieving double-digit returns in 2017,” said Andrew Latham, vice president of exploration. “Smarter portfolio choices and lower costs are already paying off.”

According to the analysis, exploration in 2017 will continue its transformation to a smaller, more efficient industry. Overall exploration investments will “at best” match 2016 spend of about $40 billion, but spending could decline further. Lower costs could mean well counts hold close to 2016 numbers, while flat budgets could indicate more job growth.

Wood Mackenzie also expects the oil majors and a “handful of bolder independents” will drill most of the wells to watch, as they did in 2015 and 2016. The “best discoveries” are going to come from new plays and frontiers, despite a bigger emphasis by many explorers on infrastructure-led drilling.

“More than half of the volumes are expected to be found in deepwater,” Latham said. “Here, some well costs will fall to $30 million or less, with full-cycle economics that are positive at less than $50/bbl.”

The oil and gas industry has cut exploration deeper than other upstream spending, according to Wood Mackenzie. And upstream investment is expected to dip to a new low of only around 8% in 2017.

“An eventual return to historic norms — around $1.00 in seven — depends on oil price recovery,” the analysis said. Wood Mackenzie expects the Brent oil price to rise sharply from 2019, averaging $77/bbl in real terms for the year. If that price were to hold, the recovery in exploration spend should follow a year or two later.

“The industry is focusing on acreage capture and reloading for the longer term,” Latham said. “Companies willing to sign acreage with firm 2017 wells may be spoiled for choice. A spate of new licensing in outer slope plays will continue as explorers digest news of better-than-expected reservoir quality and source rock potential in these ultra-deepwater settings.”

There are several “emerging exploration themes” in 2017, according to Wood Mackenzie. They include exploration for pipe natural gas opportunities near under-supplied markets such as parts of North Africa, Eastern Europe and Latin America. “Oversupplied” liquefied natural gas plays “will be deemphasized.” Meanwhile, “high-cost frontiers,” including the ice-impacted offshore Arctic and extreme high pressure/high temperature plays “will be shunned.”

“After a decade in the doldrums, the majors’ returns from conventional exploration improved to nearly 10% in 2015,” Latham noted. “The rest of the industry is heading in the same direction. Fewer, better wells promise a brighter future for explorers.”