The decline in rig counts, less spending and a smaller backlog of drilled but uncompleted (DUC) wells that persisted as 2016 came to an end are thought to be some of the culprits responsible for Ohio’s first sequential shale gas production decline since the state started reporting quarterly three years ago. 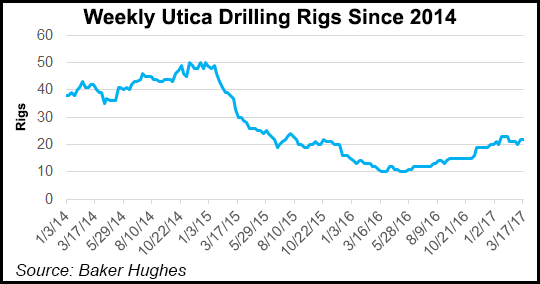 “The big reason is an overall relative lack of drilling in 2015 and 2016,” said NGIDirector of Strategy and Research Pat Rau, who added that it’s “starting to catch up.” Operators have been busy working off their DUC inventories, while takeaway constraints remain a concern as the basin awaits more pipeline infrastructure. Since January 2014, rigs running in the Utica peaked at 50 and bottomed out around 10 in mid-2016, according to calculations by NGIusing Baker Hughes data. The count has climbed since, however, reaching 21 rigs in Ohio at the end of last week.

“It’s the combination of a lot of things; less wells brought online from a declining DUC inventory and less wells were drilled,” said Shawn Bennett, executive vice president of the Ohio Oil and Gas Association. “When you combine those two things, it goes a long way, and it was always going to come. It just took a while. It’s lower capital spending, fewer rigs, fewer permits. It’s the natural ebb and flow of things.

“You’re always a bit lower heading into the fourth quarter too with everything in storage and the winter just starting,” he told NGI’s Shale Daily. “So, hopefully, we’ll see a bump, albeit a small one, but a bump early this year.”

Rau added that low basis differentials and the depressed crude oil prices that weighed on natural gas liquids (NGL) didn’t help either, but he called those “temporary issues.” Some larger Utica operators that have historically played a significant role in the play, such as Chesapeake Energy Corp., have turned their focus to different basins, Rau said. Others such as Hess Corp. are no longer drilling in the Utica, and some, like Antero Resources Corp., are focused on the Marcellus Shale as they wait for projects like the 3.25 Bcf/d Rover pipeline to come online.

Permits have been on the increase this year compared to where they were at the same time in 2016. And fourth quarter natural gas production was up from the year-ago period when ODNR reported 302.4 Bcf.