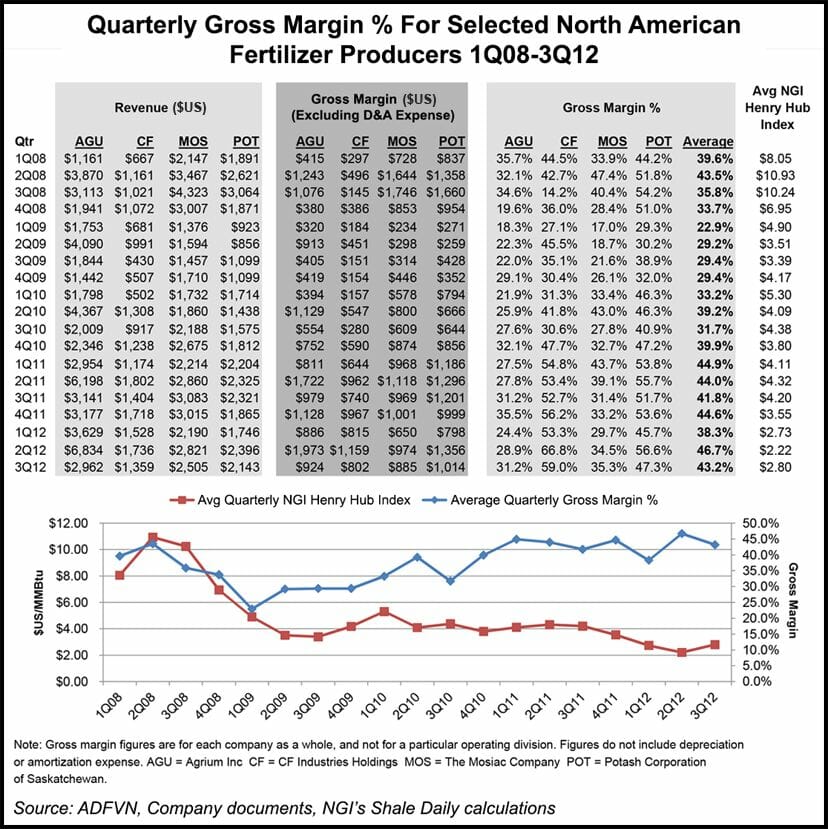 The Deerfield, IL-based company said it was positioned to benefit from a number of factors, including global population growth, the growing popularity of high-protein diets and the use of crops for renewable fuels.

“We continue to realize benefits from the low cost of natural gas in North America,” CEO Stephen Wilson said during a conference call Tuesday. “Gas prices moved up during the quarter but are still lower than the year ago, a benefit that contributed to our strong nitrogen segment gross margin.”

CF said it sold 3.0 million tons of ammonia, granular urea, urea ammonium nitrate solutions, ammonium nitrate and other nitrogen products during 3Q2012, down about 3% from the volume sold in 3Q2011.

“Our nitrogen business performed exceptionally well during the third quarter,” CFO Dennis Kelleher said. “We delivered 3 million tons of nitrogen products and achieved a gross margin of 58%…The increase in segment gross margin reflects realized natural gas costs of $3.34/MMBtu during 3Q2012 as compared to $4.45 a year ago. It also reflects the noncash mark-to-market gain of $40 million on natural gas derivative contracts…, as compared to a loss of $14 million in the prior-year period. At the end of the quarter, we had hedged positions for approximately 60% of our expected natural gas purchases for 4Q2012.”

Net sales in 3Q2012 were $1.36 billion, down 3% from $1.40 billion in the same period last year. The company attributed the decline primarily to lower total nitrogen volume and phosphate product prices, which were offset partially by higher phosphate volume. Total sales volume fell 2% to 3.5 million tons in 3Q2012, largely due to lower urea sales from a year ago. Lower phosphate product prices resulted from lower global demand relative to the same period last year, while the phosphate volume increase resulted from strong demand in North America.

“As dealers moved to address tight inventories, we achieved exceptional results during what is the normal seasonal low quarter of the year,” said Wilson. “We generated a 52% gross margin, leading to record third quarter EBITDA, net earnings and earnings per share. We also built a strong order book for the fourth quarter, indicative of robust nitrogen demand in anticipation of another year of high planted acres in 2013.”