Three years ago, as the amounts of associated natural gas being flared continued to soar in the Bakken Shale, North Dakota industry and state officials saw hope for absorbing a good chunk of the wasted gas in the building of new fertilizer plants. But in 2014, there is only one new plant in the works, and it won’t use flared gas supplies as its feedstock. 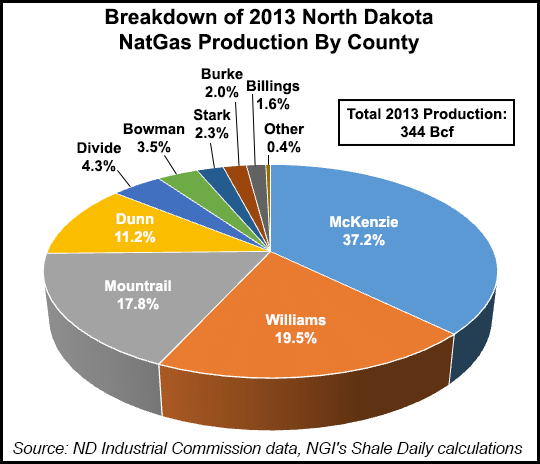 The dream has been put on hold, and state officials have no good explanations for the lost promise. A major coal gasification plant near Beulah, ND, has the state’s only existing fertilizer operations and announced earlier this year plans for a third, larger unit, but those operations offer no relief for the flared associated gas problems in the Williston Basin.

A flurry of fertilizer facility proposals were floated in 2011 and 2012 (see Shale Daily, Aug. 17, 2012; Jan. 17, 2013), but none have gotten to the construction stage, and there is no immediate prospect of that happening, the state Department of Commerce’s John Mittleider, manager of agricultural and bioenergy development, told NGI‘sShale Daily.

“The company that was furthest along with plans [CHS Inc.] just announced this week that they were going to withhold an announcement [on the future of its fertilizer plans] for another 60 days,” said Mittleider (see Shale Daily, April 2). He said CHS, a multi-billion-dollar St. Paul-based agricultural products cooperative, cited the 60-day timeline to state officials, but publicly did not put a time frame on the reassessment of the $1.5-2 billion proposed project.

“At the current cost estimate, the project will not generate the targeted returns on capital and would not be viable,” CHS spokesman Annette Degnan told NGI’s Shale Daily. “The potential plant is expected to contribute $23 billion in additional local and state economic revenue over 20 years, and we are also evaluating options to reduce overall construction costs.”

While the playing field looks barren, the interest is still high in fertilizer plants as a place to use the state’s increasingly plentiful gas supplies, and Mittleider thinks there is still a chance of ground being broken for two projects late this year and two additional ones next year.

Subsequently purchased by Beowulf Energy LLC, the N-Flex project has never gotten off the ground, and the company is supposed to return to the NDIC later this year to give an accounting of its plans. Described as “distributed ammonia production from associated gas,” the project was outlined as a pilot involving at least one mobile fertilizer-producing facility.

Beowulf/N-Flex claims that a single oil well in the Bakken or Three Forks formations could produce enough gas to convert into more than three tons of anhydrous ammonia daily, which is enough fertilizer for 33,000 acres of wheat and 16,000 acres of corn.

Mittleider said one other fertilizer plant is on the drawing board in the Grand Forks area of the state by a unit of the North Dakota Corn Growers Association that is proposing to build an anhydrous urea plant with a 2,200 tons/day capacity (see Shale Daily, July 24, 2012).

“They have acquired their land; they will use wastewater from the city [Grand Forks]; and they are in the process of doing engineering and pre-site work studies,” he said. “Next, they will take plans into the marketplace and look for financing.”

There are still four possible fertilizer projects, including one using syngas from the Dakota Gasification Co., which is a unit of Bismarck, ND-based Basin Electric Cooperative. That project would add a 1,100 tons/day urea plant by 2017. Urea production requires anhydrous ammonia and carbon dioxide, both of which are produced at the synfuels plant.

“All of the other projects hopefully would be using Bakken gas,” Mittleider said. “I would anticipate these projects to be digging ground this year and next.”