FERC has denied a request from three environmental groups to rehear a 2017 order authorizing the Mountaineer XPress and Gulf XPress projects, a pair of TransCanada Corp. efforts to increase natural gas pipeline capacity out of the Appalachian Basin by expanding the company’s Columbia Gas Transmission LLC’s system. 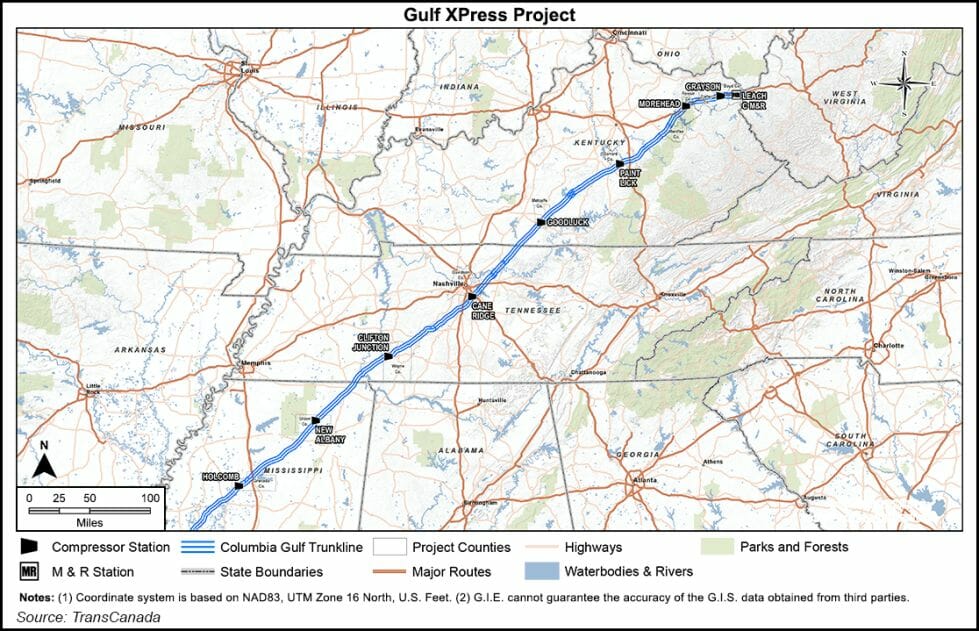 The Gulf XPress project was to add seven new compressor stations — three in Kentucky, two in Tennessee and two in Mississippi — to expand the capacity of Columbia Gulf Transmission LLC’s system [CP16-361]. The project would also include upgrades to an existing compressor in Carter County, KY, and an existing meter station in Boyd County, KY.

FERC issued certificates of public convenience and necessity for the Mountaineer XPress and Gulf XPress projects in late 2017. Within weeks, Allegheny Defense Project, Ohio Valley Environmental Coalition and Sierra Club file for rehearing. FERC should revisit the decision, the environmental groups said, because both it and the project’s environmental impact study failed to comply with the Natural Gas Act and the National Environmental Policy Act (NEPA).

Among their complaints, the groups argued that FERC attempted to “obscure the significance” of downstream greenhouse gas (GHG) emissions by analyzing them at too broad a scale.

“We disagree,” FERC said in its order. “The Commission’s environmental review went beyond what is required to comply with NEPA by estimating GHG emissions emitted by downstream consumption of natural gas, an activity that is attenuated and not reasonably foreseeable.”

FERC’s analysis of downstream emissions, a bone of contention between Commissioners for months, was argued again in the Mountaineer rehearing order. Chairman Neil Chatterjee and Commissioner Bernard McNamee supported the decision not to revisit the case, while Commissioner Richard Glick dissented.