Under increasing pressure from Congress, FERC last week agreed to hold a public conference later this month to address the state of “current and projected” interstate gas pipeline capacity to the California market, as well as explore what is driving the higher gas prices in the southern end of the state.

Chairman Curt Hebert Jr. revealed the Commission plans for the May 24 conference after Sen. Dianne Feinstein (D-CA) criticized the Commission for failing to tackle soaring gas prices as part of its April 26 decision to mitigate wholesale power prices in the troubled California electricity market.

“As far as I’m concerned, if FERC is not going to address natural gas, you are not going to be able to help California [resolve its power crisis]. The price of natural gas in Southern California is…three times higher than the rest of the country,” she complained during a Senate Energy and Natural Resources Committee oversight hearing last Thursday into FERC’s price-mitigation order.

“California transports gas from San Juan New Mexico where it sells at less than $5/Dth, but when it gets to California the price becomes $15.” At this price, “electricity is going to sell for $400 to $500/MWh,” said Feinstein, a new member of the committee.

“Sen. Feinstein, I agree this is a gas situation as well, and we do need to look into that, and we are,” Hebert responded, noting that the Commission recently approved a Kern River pipeline expansion into California in record time, is investigating potential price manipulation on the part of El Paso Natural Gas and will hold the public conference on pipeline capacity to the California market.

Testifying before the committee, Commissioner William Massey also drove home the need for FERC to explore the reasons for abnormally high delivered gas costs into Southern California, especially since they’re often the basis for the steep wholesale electric bids into the California Independent System Operator market. “I’ve concluded that we will never get a handle on electricity prices, unless we get a handle on gas prices.” 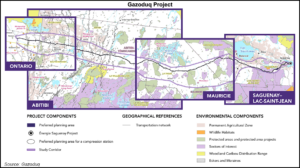