In the first revisions to natural gas policy in more than two decades, FERC on Thursday issued policy statements to guide how future natural gas and liquefied natural gas (LNG) infrastructure is approved, including an interim greenhouse gas (GHG) policy to ensure the “legal durability” of its decisions. 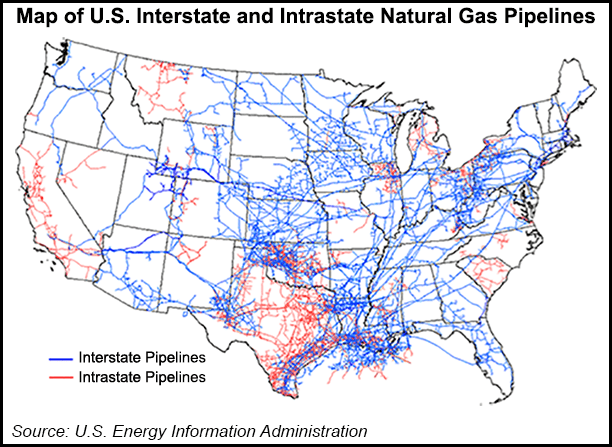 The updated policy is not a complete surprise, as FERC Chairman Richard Glick has signaled for months that GHG policies needed to be included.

“I believe today’s long overdue policy statements are essential to ensuring the Commission’s natural gas siting decisions are reflective of all stakeholder concerns and interests,” Glick said Thursday. “We have witnessed the impact on pipeline projects when federal agencies, including the Commission, fail to fulfill their statutory responsibilities assessing the potential effects of a project on the environment, landowners and communities.”

Glick in November had argued that the “reasonably foreseen” carbon emissions from natural gas infrastructure should be included in every certificate review. During a technical conference, Glick had said of the review that “what we’re doing here is creating greater certainty for industry.”

Recent court decisions, the Chairman noted, had vacated or remanded natural gas certificates approved by FERC because of a lack of GHG data.

“If we are going to ensure legal durability of our orders, it is essential that the Commission satisfy its statutory obligations the first time,” said Glick.

“I’m proud of these policy statements because they provide a forward-looking declaration on how the Commission intends to execute its authority to consider proposed infrastructure projects in a manner that is responsive both to all the interests at stake and to the direction of the courts,” Glick said.

Danly said the statements also contradicted Congressional intent in crafting the NGA, which stated that gas development was in the public interest.

Republican Commissioner Mark Christie said the Democratic majority “essentially assumes” it has the power “to rewrite both the NGA and the NEPA. That is a power we do not have.” Christie called the new certificate policy “the mother of all legal weapons.”

With the interim GHG policy, the Commission said it was “taking a critical step” to clarify how to address GHG emissions under the NGA and National Environmental Policy Act (NEPA) for the proposed gas infrastructure.

Neither document establishes binding rules, FERC noted. Rather, they are intended to explain how the Commission may consider applications for gas project construction.

“They will apply only to pending and new projects; those applicants with projects now pending before the Commission will have the opportunity to supplement their records.”

FERC noted that In 2018 and last year it issued notices of inquiry requesting public comment on its 1999 policy statement on certifying interstate natural gas transportation facilities.

“In particular, the Commission requested information on the consideration of the effects of such projects on affected communities, the treatment of precedent agreements in determining the need for a project, and the scope of the Commission’s environmental review, including an analysis of the impact of a project’s greenhouse gas emissions,” it noted.

The updated policy explains that, in making such determinations, FERC “intends to consider all impacts of a proposed project, including economic and environmental impacts, together. It also calls for a robust consideration of impacts to landowners and environmental justice communities in the Commission’s decision-making process.”

FERC has traditionally relied on precedent agreements between project applicants and shippers to establish the need for a project. However, the updated policy “states that applicants should provide more than just precedent agreements, to help explain why a project is needed, such as the intended end use of the gas. It also states that the Commission may consider other evidence of need, including demand projections, estimated capacity utilization rates, potential cost savings to customers, regional assessments and statements from state regulators or local utilities.”

The interim GHG statement explains how FERC would assess the impacts of natural gas infrastructure projects on climate change in its reviews under NEPA and the NGA.  The Commission has requested comment “on all aspects of the interim policy statement, including, in particular, the approach to assessing the significance of the proposed project’s contribution to climate change.”

The GHG guidance could be revised based on the record developed in the proceeding, FERC noted. However, the Commission plans to begin using the framework established in the policy statement in the interim. Using the interim framework would allow the Commission to “evaluate and act on pending applications under section 3 and section 7 of the NGA without undue delay and with an eye toward greater certainty and predictability for all stakeholders.”

The interim GHG policy sets a threshold of 100,000 metric tons/year of GHG emissions. Projects under consideration with emissions above that level would be required to prepare environmental impact statements, FERC noted. The Commission could consider proposals by project sponsors “to mitigate all or part of their projects’ climate change impacts.” FERC also could condition its approval on further mitigating the impacts