FERC on Thursday granted a Southwest Gas Corp. request for a rehearing of a Paiute Pipeline Co. proposal to charge a zero fuel retention charge and a standalone retention charge for actual lost and unaccounted for natural gas for transportation service that only uses Paiute’s Adobe Lateral in Nevada. 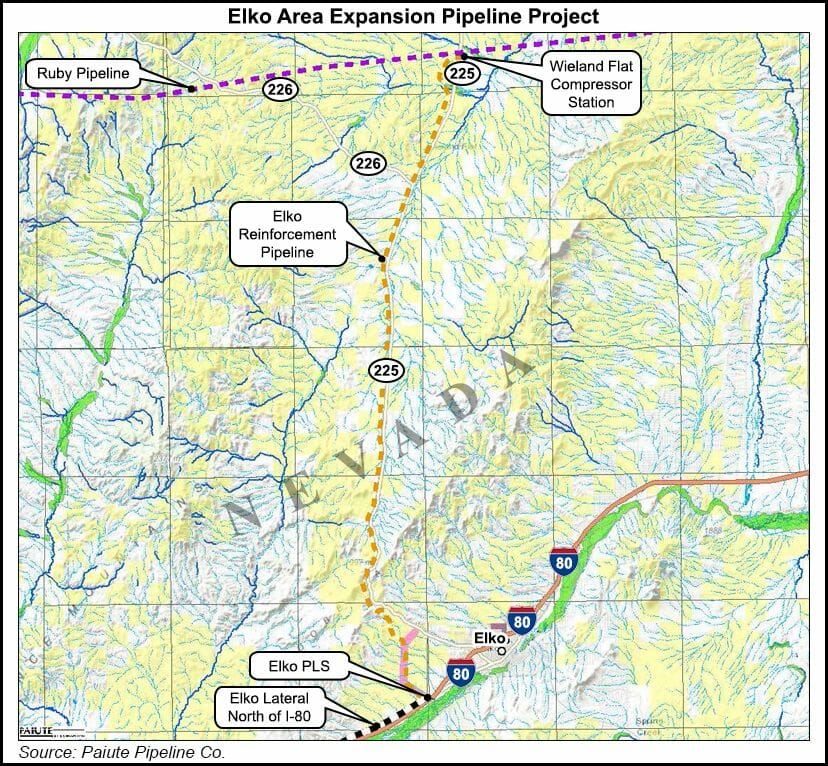 The Adobe Lateral was approved by the Federal Energy Regulatory Commission in December, along with modification of Paiute’s existing Elko citygate, construction of a new interconnection with Ruby Pipeline LLC at its Wieland Flat Compressor Station, and construction of associated facilities (see Daily GPI, Dec. 15, 2015).

In a May 14, 2015 order authorizing Paiute to construct and operate the Elko Area Expansion Project, FERC approved the company’s request for an incremental reservation rate and accepted a proposed zero fuel retention charge and stand-alone lost and unaccounted for gas retention charge for transportation using only the Adobe Lateral (see Daily GPI, July 7, 2015). The order also rejected a Paiute proposal that would have prohibited shippers from trading imbalances between its existing system and the Adobe Lateral. FERC acknowledged that Paiute had a legitimate concern about cross-subsidization, but said it should address it by considering an appropriate rate to apply to imbalances.

In a December 14 order, FERC granted a Paiute request for rehearing, found the Elko Area Expansion to be operationally integrated with Paiute’s existing pipeline system, and directed the company to charge its current system interruptible transportation rate for any new interruptible service on the Adobe Lateral. It also re-examined Paiute’s initial rates and rejected the proposed zero fuel retention charge and stand-alone lost and unaccounted for gas retention charge for transportation using only the Adobe lateral.

“The Commission found that the proposed retention charges would be incompatible with an integrated pipeline system using a postage stamp rate design,” FERC said. “Therefore, the Commission required Paiute to use its system fuel and lost unaccounted for gas retention charge for transportation using the Adobe Lateral.” Paiute’s imbalance trading proposal was found to be moot.

In requesting a rehearing, Southwest Gas said the December 14 order was inconsistent with FERC policy. In deciding whether or not to grant a fuel charge exemption, “the Commission does not look to whether a pipeline system is integrated or uses a postage stamp rate design, but rather it looks at whether fuel will actually be consumed,” according to Southwest Gas. And FERC usually prohibits pipelines from discounting fuel charges because fuel is a variable cost, and FERC does not permit discounts below the variable cost.

A motion by Sierra Pacific Power Co. for an evidentiary hearing to determine the justness and reasonableness of some of Paiute’s proposed charges was denied by FERC.