FERC on Wednesday directed Rover Pipeline LLC to suspend progress on its second horizontal directional drill (HDD) under the Tuscarawas River in Stark County, OH, pending additional review, the latest setback for a project that has been dogged by regulatory issues since beginning construction last year. 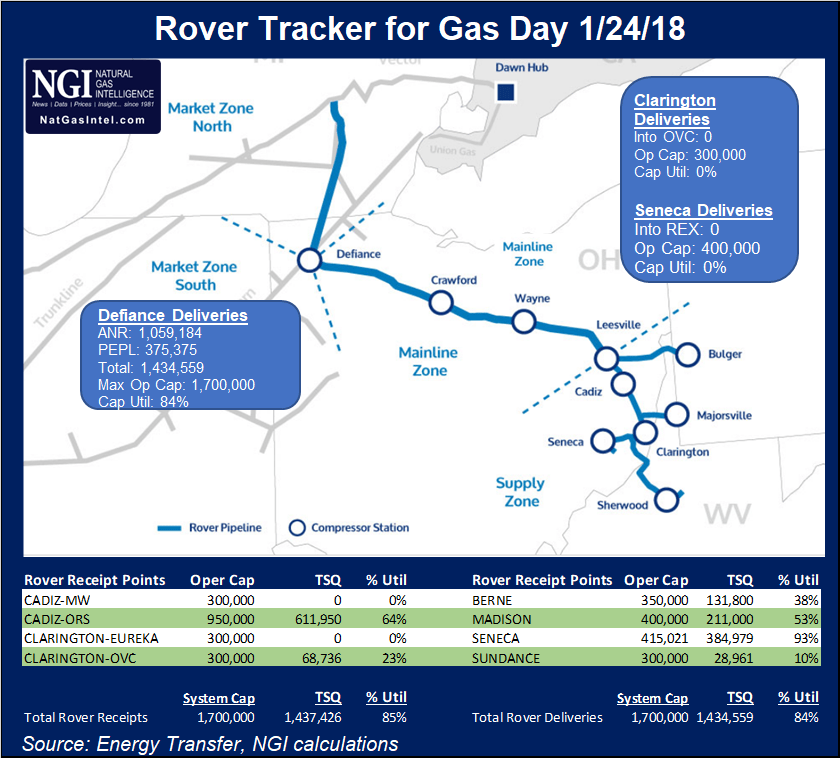 Citing a loss of drilling fluid during the pilot phase of the project’s Mainline B HDD beneath the Tuscarawas, Federal Energy Regulatory Commission Director of Energy Projects Terry Turpin in a letter Wednesday ordered Rover to “cease advancement of the pilot cutterhead” and to provide additional information to evaluate next steps.

“While our understanding is that no fluid has reached the surface, and no impacts on sensitive resources have been documented, the difficult geology at the crossing warrants investigation into other approaches prior to advancing the HDD pilot drill as well as before subsequent reaming passes,” Turpin wrote.

Asked about FERC’s letter, Rover spokeswoman Alexis Daniel said the operator has “ceased operations at the Tuscarawas site, however we are continuing our construction activities at all other locations.

“As of today, we have successfully completed 77% of the HDDs needed for the project and are more than 99% complete with the total project construction,” Daniel said. “We continue to work closely with FERC on the best path forward, with a priority on maintaining our environmental stewardship and public safety responsibilities. We remain fully in compliance with our approved HDD plans and continue to progress at the other HDD locations.”

The Ohio Environmental Protection Agency (Ohio EPA), which cited Rover for a roughly 2 million gallon release of drilling fluids at the Tuscarawas site during the project’s Mainline A HDD last year, had raised concerns about the second Tuscarawas HDD.

Ohio EPA wrote to FERC Tuesday asking the Commission to “order the cessation of current drilling operations and require proper abandonment of the current installation, as well as require Rover to submit a permanent approvable alternative.”

The state agency has been in a back and forth with Rover for months over numerous alleged environmental violations, as well as associated disputes over permitting and payment of civil penalties.

“Moreover, FERC should require abandonment of the current installation because of the very similar problems encountered during Line A installation.”

Last year, FERC ordered a temporary halt to HDD activities for the Rover project in response to the Tuscarawas spill during the Mainline A crossing. HDD activities were eventually allowed to resume after months of review and third-party consultation.

“We appreciate Rover’s efforts to cautiously approach drilling activities during the Mainline B crossing,” Turpin wrote Wednesday, “and expect that approach to continue.”

Rover, a 713-mile, 3.25 Bcf/d interstate pipeline designed to transport Marcellus and Utica shale production to markets in the Midwest, Gulf Coast and Canada, entered partial service last year and was flowing just over 1.4 Bcf/d to interconnects with ANR and Panhandle Eastern in Defiance, OH, Wednesday, according to NGI‘s daily Rover Tracker.

Backer Energy Transfer Partners LP has said it expects the project to enter full service by the end of March, but Wednesday’s developments could complicate those plans, according to ClearView Energy Partners LLC.

“Based on the information in FERC’s letter, we cannot predict how long the current construction delay is likely to last,” ClearView said. While Turpin commended Rover’s cautious approach with Mainline B, “we cannot predict whether good intentions and diligent good practice will necessarily offset stubbornly inhospitable geological conditions.

“We would not rule out a multi-month delay to the completion of Mainline B if FERC finds it appropriate to direct Rover to use a new route across the Tuscarawas because the current crossing locations presents unacceptable adverse environmental impact,” the firm wrote. “Nor do we know at this point what Rover can do to illustrate the current route remains feasible.”