An initial investigation by FERC that found some “anomalies” during Winter Storm Uri in February 2021 may have been caused by natural gas market manipulation, Chairman Richard Glick said Thursday. 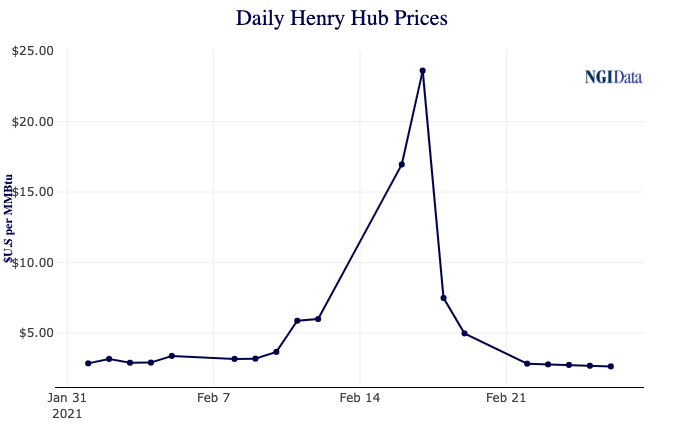 The Federal Energy Regulatory Commission is unable to probe some aspects of the possible illegal activity because the main Texas power grid, the Electric Reliability Council of Texas (ERCOT), manages 90% of the state and operates independently, Chairman Richard Glick said in Houston. He spoke at the 40th annual CERAWeek by S&P Global.

However, grids in other states, which did not have blackouts during the deadly freeze, reported potential manipulation by Texas power generators, Glick told the audience.

“We are investigating potential allegations of manipulation that may have happened in jurisdictional electricity markets, and we did find some anomalies,” he said. “Those are being further investigated.”

The loss of power at natural gas-fired electric generators in Texas made up most of the failures identified by FERC during an inquiry into the extreme cold weather. The joint inquiry with the North American Electric Reliability Corp. (NERC) determined that gas-fired generators made up 58% of all unplanned outages, derates or failures to start.

Probing potential manipulation, however, is going to take time to complete, Glick said. Regulators will act, though, if there was illegal activity.

“One thing I’ve tried to make clear during my chairmanship is that if wrongdoing occurs, or if alleged wrongdoing occurs, we’re going to go after that, and that’s certainly going to be the case in this situation,” Glick said. “It just takes a while to go through all the evidence.”

The extreme weather event resulted in the largest manually controlled load shedding event in U.S. history, according to FERC and NERC. During Winter Storm Uri, ERCOT ordered a total of 20,000 MW of rolling blackouts to prevent a complete collapse of the grid. More than 4.5 million people in Texas lost power, some for up to four days.

Uri “is a great example…of why you need to have a resilient electric grid,” Glick said. “Most of the power outages occurred in Texas. They didn’t occur in some of the surrounding states where they had similar weather conditions in Louisiana, Kansas, Oklahoma…And those states did experience minor outages. But as we saw in Texas, we saw outages many days in length. And in large part, we had businesses lost, hundreds of millions of dollars.

“But worse, hundreds of people died in the United States of America. People died because they didn’t have access to electricity. We need to do something about that. And the problem is we know around the country, it’s different weather conditions around the country, but everywhere. whether it be in the West, with dry conditions and wildfires or hurricanes or tornadoes or obviously extreme cold weather.”

Will There Be Another Uri-Type Event?

The nation has to “act to make the grid more resilient,” Glick said, or “we’re going to see similar situations…What happened in Texas during Winter Storm Uri. And part of it was extreme cold, and a lot of the power plants froze. They weren’t sufficiently weatherized.”
However, in other regions, “they didn’t lose power as much as Texas. And the reason they didn’t is because they were connected to the rest of the grid. They actually had transmission access to be able to bring in power.” For example, in the PJM Interconnection, the grid operator  “did a great job of…sending excess power that they had” into neighboring grids to avoid massive blackouts.

“Texas because it’s its own grid, and I know it’s very Texas, and people in Texas don’t want to be subject to FERC regulation. But we really need to figure out a way to make the grid more resilient. Part of  that is to add increased transmission capacity so people can bring in power when it’s needed during extreme conditions.”

Some have said that one issue in Texas is the lack of communication between ERCOT and customers, Glick said.

ERCOT’s managers “didn’t necessarily have a plan and a strategy to make sure that the natural gas producing areas had access to the power. So whether it be a production facility or processing facility, often they lost power as well, and they weren’t able to provide natural gas to the electric generation facilities, which just made the situation worse.”

At the conference, Glick also discussed the recent policy changes at FERC, which require natural gas infrastructure proposals to be climate-tested.

Natural gas pipelines and liquefied natural gas (LNG) export projects face heightened scrutiny and potential permit delays because of the revisions, which are the first in 30 years.

Because some recent gas pipeline and LNG approvals have been stymied by federal courts, the policy statements would guide FERC in how future infrastructure is approved. Included is an interim greenhouse gas (GHG) policy to ensure the “legal durability” of FERC decisions.

Critics claim the revisions are going to cripple plans for necessary infrastructure. Glick told the audience FERC had little choice but to comply with the courts.

“Whether we just find whether a project is needed or not,” Glick said, “we have to take into account whether it’s actually a growing area that’s going to need more gas consumption. But…by its nature, to the extent if you’re going to utilize the pipeline more often because it’s a growing area…the emissions are going to be higher…

“You’re balancing those emissions and the impact on climate change, against the benefits of the project, to satisfy the growing energy needs of an area.”

Ironically, on Friday, one day after Glick shared his view on the revisions, the U.S. Court of Appeals for the District of Columbia (DC) remanded a certificate that had been issued by FERC in 2020 for a 2.1-mile looping and compressor upgrade project by Tennessee Gas Pipeline Co. LLC.

The project, which includes retiring two less efficient compressors, would provide an additional 72,400 Dt/d of firm delivery to Columbia Gas of Massachusetts and Holyoke Gas and Electric.

Glick said Thursday he had met with nearly a dozen pipeline executives to date regarding the revised FERC guidance. The executives, he said, “expressed a great deal of concern about some of the uncertainties that they suggest that we’ve raised as a part of these policy statements.”

Noting he was speaking only for himself, Glick said “I think we at the very least, we need to address some of those uncertainties, provide a little more certainty as to what we mean by some of the provisions in total…

“There’s still work to be done and there’s always work to be done because the proof will be in the pudding. When we actually consider these…requests for permitting for LNG facilities or pipelines. That’s when we’ll see how we implement them.”
FERC is facing other challenges, too, including the review of the nation’s grid to ensure its reliability, Glick said. The nation also needs “more transmission, potentially to reduce congestion, to…allow consumers to access more economic power.” In addition, interconnection issues are under review.

“We have a ton of new electric generation, in many cases, because developers want to get the generation online, but it’s taking years and years and years, study after study. And we’re looking at it in a very piecemeal approach. So, we’re trying to figure out how do you accelerate the process and at the same time, build a transmission grid out for the long run, reduce the time for connecting the new generation to the grid?”

Many state policies are “encouraging” wind, solar and storage buildout, Glick noted. “Obviously, utilities are looking to green up as well. And they can’t do that because we can’t get these projects to the interconnection.”

FERC’s chief said it was “very difficult to explain to folks around the world how our utility systems are regulated because we have state, federal and regional enemies. It’s very difficult. Cities get involved.”
The East Coast is a story by itself, with the “enormous amount of offshore wind being developed. There are people now talking about doing it in California, here and in the Gulf of Mexico, for instance.

FERC wants to “eliminate the barriers,” Glick said. He expects the Commission to soon release “several proposed rulemakings addressing some of these issues, including the interconnection reform, and particularly interconnection as it relates to offshore wind…

“And then I’m hoping either by the end of the year, sometime early next year, that we’ll be able to implement final rules and look about bringing down barriers to new technologies.”

FERC’s job is not to promote technologies, Glick said. However, “we’re supposed to break down barriers to technology. A lot of times, these market rules that have been written around the country were written long before some of these technologies, such as wind and solar and hybrid technology and so on, were economically effective.”