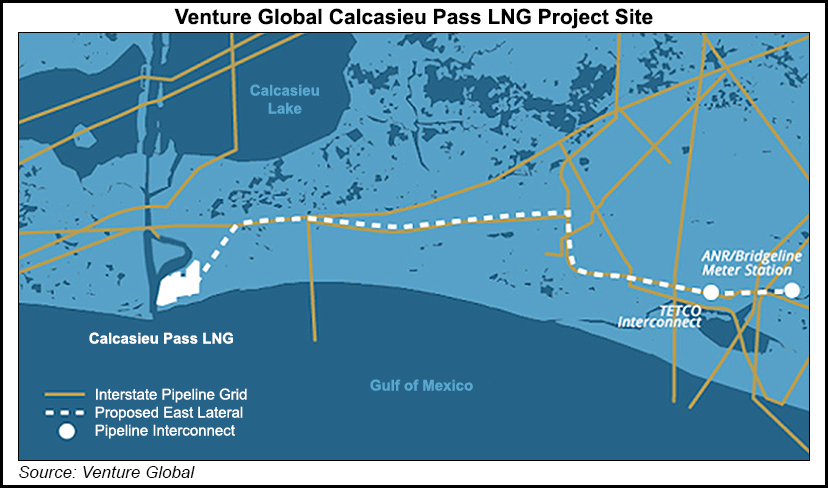 Construction and operation of the project would result in some adverse environmental impacts, but they would be reduced to less-than-significant levels, staff said in the FEIS [CP15-550].

The Calcasieu Pass Project, which would be built on a 930-acre site in Cameron Parish, LA, would include two 200,000 cubic meter LNG storage tanks; two LNG berthing docks, designed to handle carriers of 120,000-210,000 cubic meter cargo capacity; and a 1,500-foot by 3,000-foot turning basin adjacent to the Calcasieu River Ship Channel. All would be built and operated by Venture Global Calcasieu Pass LLC (VGCP), a subsidiary of Venture Global LNG.

The project also calls for constructing 23.4 miles of 42-inch diameter pipeline to bring feed gas to the terminal site. The pipeline would have interconnections with ANR Pipeline Co., Texas Eastern Transmission LP and Bridgeline Holdings LP. Associated infrastructure would be built and operated by TransCameron [CP15-551].

VGCP and TransCameron filed a joint application for FERC authorization of Calcasieu Pass in September 2015. The project is tentatively scheduled to begin operations in 2022.

Release of the FEIS comes just days after Polish Oil & Gas Co. (PGNiG), one of Central Europe’s leading utilities, signed binding contracts with subsidiaries of Venture Global LNG to take exports over 20 years from proposed LNG projects that would be sited in Louisiana and Texas.

PGNiG said it will buy 2 mmty of LNG from Calcasieu Pass and Plaquemines LNG, a second project under development in Plaquemines Parish to be sited on the Mississippi River. If the latter project moves forward, it would export up to 20 mmty beginning in 2023. The LNG price would be based on the Henry Hub index, along with liquefaction costs, PGNiG said.