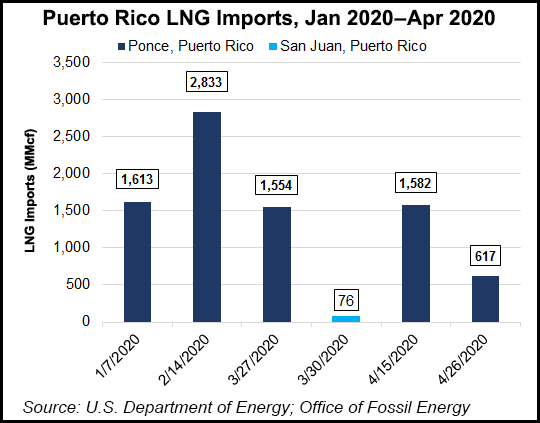 The facility was commissioned in April and will supply LNG to industrial users and microgrids via trucks. It also feeds a nearby gas-fired power plant owned by the Puerto Rico Electric Power Authority. But in a “show cause” order issued Thursday, the Federal Energy Regulatory Commission said the facility is subject to its approval under the Natural Gas Act.

FERC noted in the order that it has authority over the siting, construction, expansion or operation of LNG terminals and said it has previously approved similar facilities in Puerto Rico, an unincorporated U.S. territory. It is the lead federal agency for approving LNG terminals and cooperates with other state and federal agencies during the permitting process. Others, such as the U.S. Coast Guard and Pipeline and Hazardous Materials Safety Administration, are involved in regulating the facilities.

The Commission ordered NFE to explain within 30 days why it didn’t seek federal approval for the facility.

“I would certainly expect this to have some type of FERC approval,” said Brad Williams, principal at the Houston-based energy consultancy Spitfire Energy Advisors, who has worked on LNG projects in the region. “…It is defined as an LNG terminal in Puerto Rico. I don’t know who would have alerted FERC, but somebody made some kind of filing, or complaint that” prompted the show cause order.

“By definition, the fact that FERC has issued this order, shows they view that it should have been a FERC-permitted facility,” he told NGI.

The Puerto Rico Electric Power Authority signed a deal with NFE last year to convert two of its generating units from diesel to natural gas, which it would supply with up to 863,000 gallons of LNG per day.

NFE went public last year and is focused on introducing LNG in markets that lack access to the fuel for power generation and other needs. The company operates or is developing small-scale LNG assets across the world, including import terminals, fuel management facilities, regasification infrastructure, gas-fired power plants and midstream facilities in the Carribean, Europe, Latin America and the United States.