Bringing to a close months of delays stemming from restoration issues, FERC on Thursday authorized Rover Pipeline LLC to place its Burgettstown and Majorsville laterals into service. 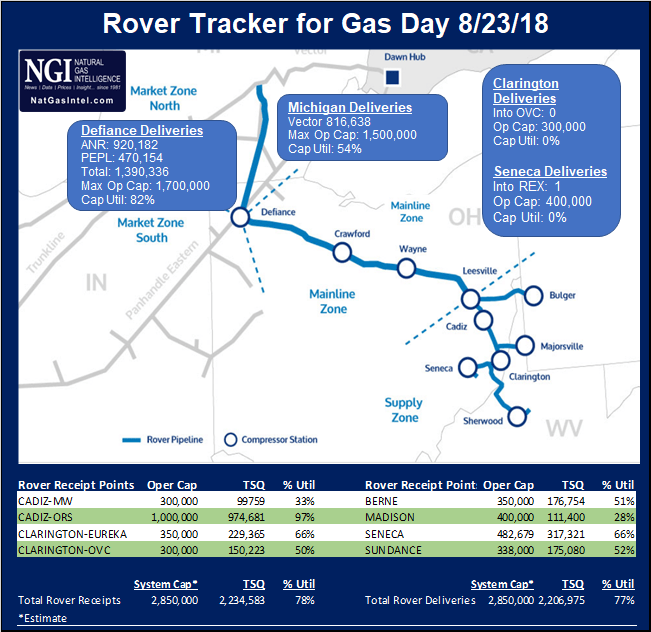 The Federal Energy Regulatory Commission’s Rich McGuire, director of environment and engineering for the Division of Gas, told Rover Thursday that the authorizations are based on third-party inspections showing “that rehabilitation and restoration of the affected areas are now generally proceeding satisfactorily, and Rover’s commitment to promptly finalize restoration of these facilities.”

The in-service authorizations come after Rover on Monday provided FERC with a detailed timetable of its efforts to repair slips along the routes of the Majorsville and Burgettstown lines, where the operator has encountered erosion control setbacks.

McGuire said FERC expects Rover to meet the targets set out in that filing — Nov. 23 for completing restoration and slip repairs along the Burgettstown line, Dec. 13 for Majorsville — “to the maximum extent practical.

“Rover also commits to retain adequate construction crews…and provide restoration progress and schedule updates on a weekly basis” for the “outstanding ground movement areas” along the two laterals, referring to 13 locations identified for Burgettstown and 14 locations for Majorsville.

Earlier this year, Rover drew FERC’s ire for missing restoration deadlines set out in previous in-service authorizations, raising the possibility that the agency could withhold approvals for the 3.25 Bcf/d, 713-mile Appalachian takeaway project’s remaining facilities. For its part, Rover has attributed the delays to weather and said it has acted in good faith to resolve the restoration issues.

While most of the Rover project has already entered service, including all of Mainline B, until Thursday, the Majorsville and Burgettstown laterals remained in limbo despite being mechanically complete.

The Burgettstown line extends from southwestern Pennsylvania to connect with the Rover mainline in eastern Ohio, while the Majorsville Lateral would gather supplies from an origin point in Marshall County in West Virginia’s northern panhandle.

From here, Rover is expected to soon seek FERC’s blessing to start up the project’s remaining two supply lines, the CGT and Sherwood laterals.

In a note Thursday published prior to the release of FERC’s authorizations, Genscape Inc. analyst Colette Breshears said “there have been some indications lately that Rover’s relationship with FERC has improved with several good-faith efforts, which may make placement of new laterals into service less onerous. After FERC approves the Burgettstown and Majorsville laterals, Rover will need to again ask permission to bring on” Sherwood and CGT, “which are still in late construction stages and/or in the process of remediation.

“While Rover has seemed somewhat less concerned with bringing the Sherwood Lateral into service,” Antero Resources Corp. officials said they were “counting on it being online in their 4Q2018 plans, which suggests that Rover will be pursuing approval in the next few months.”

The timing of the start-up of Rover’s Majorsville and Burgettstown lines does not impact Genscape’s production forecast for the region, according to Breshears.

Designed to gather supply from the Revolution and Harmon Creek processing plants, Burgettstown “will allow growth in a sub-area currently thought to be constrained, but on a regional level there is plenty of takeaway allowing continued growth in other areas,” Breshears said. “Majorsville will be filled by reroutes until the commencement of the Iron Bank meter station in 4Q2018, when some new production may be added.”

Rover has been flowing more than 2 Bcf/d east-to-west across Ohio on its mainline to interconnects with Panhandle Eastern and ANR, with volumes also flowing north to an interconnect with the Vector Pipeline, NGI’s daily Rover Tracker shows. Rover, an affiliate of Energy Transfer Partners, is designed to transport Marcellus and Utica shale gas to markets in the Midwest, Gulf Coast and Canada.