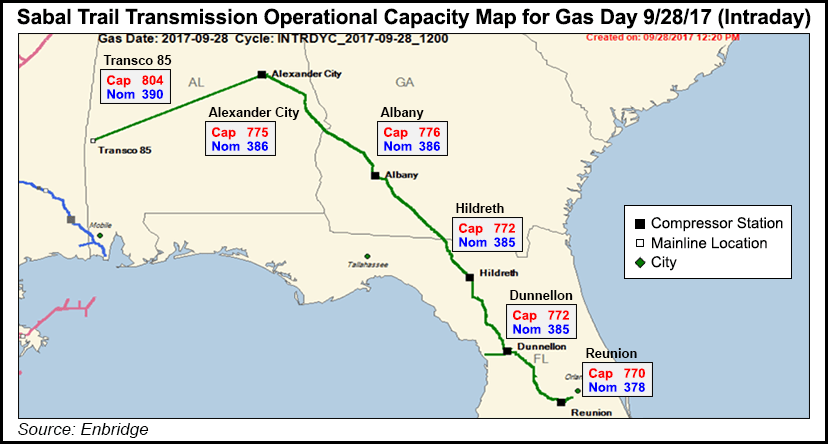 While Wednesday’s action responds to the court’s findings, the Federal Energy Regulatory Commission still could challenge the ruling, and a number of scenarios remain in play that would avoid interruption to the projects, according to analysts.

FERC said the draft supplemental EIS provides the court-mandated GHG estimates, along with its methodology and other details. But the Commission is also sticking to its guns by refusing to use the Social Cost of Carbon (SCC) methodology, which environmental groups want incorporated in FERC pipeline reviews.

The draft identifies and estimates GHG emissions from several natural gas-fired power plants served by the SMP project, a combined 685.5-mile expansion designed to supply about 1.1 Bcf/d from Transco Zone 4 to markets in Florida and the Southeast. FSC is operated by a subsidiary of NextEra Energy Inc., while Sabal Trail is a joint venture between NextEra, Spectra Energy Partners LP and Duke Energy.

The FSC pipeline, Sabal Trail and the Hillabee Expansion entered service this summer.

FERC calculated a net increase in downstream emissions from the pipelines but said it “could not find a suitable method to attribute discrete environmental effects to GHG emissions.” The existing global models “are not suited to determine the incremental impact of individual projects, due both to scale and overwhelming complexity.

“…We could not identify a reliable, less complex model for this task and we are not aware of a tool to meaningfully attribute specific increases in global carbon dioxide concentrations, heat forcing or similar global impacts” to the SMP project.

In what could be read as a direct response to criticism from environmental groups, FERC shot down the SCC methodology as “not appropriate for use in any project-level” review.

“The SCC tool may be useful for rulemakings or comparing regulatory alternatives using cost-benefit analyses where the same discount rate is consistently applied; however, it is not appropriate for estimating a specific project’s impacts or informing our analysis,” FERC said.

The Sierra Club spearheaded the environmental opposition that led to the appeals court decision. Since its victory, the group has made hay of the ruling, arguing in various forums that the decision has broad implications for other pipelines under review or recently approved by FERC. The group has referenced the ruling while opposing the Mountain Valley Pipeline, the Atlantic Coast Pipeline, the Nexus Gas Transmission pipeline and the Atlantic Sunrise expansion.

“The courts have ruled that FERC’s days as a rubber stump for the fracked gas pipeline industry are over and that means finally putting an end to the fast-track approval process,” said Sierra Club’s Kelly Martin, director of the Beyond Dirty Fuels Campaign. “Now, the agency must fulfill its duty and evaluate these dirty and dangerous pipelines for what they are: a threat to our clean air and our communities.”

FERC’s response to the Sabal Trail decision doesn’t preclude FERC from appealing the substance of the Aug. 22 ruling, according to an analysis by ClearView Energy Partners LLC. The firm estimated that FERC has until next Friday (Oct. 6) to appeal and could ask the court to withhold its mandate to enforce the ruling pending a decision on that appeal.

“We also view FERC’s quick action on the draft supplemental EIS as supportive of a request by the Commission to remand the certificates” issued to Sabal Trail, Hillabee and FSC without vacating them, ClearView analysts said. “In this case, current operations and construction projects could continue even if FERC elects not to appeal.”

A 90-day stay of the court’s mandate is also in play as FERC works through the drafting process for the supplemental EIS. A stay would give FERC about 45 days from the Nov. 20 close of the comment period to issue a revised certificate for the projects, according to the analysts.

“Given the relative narrowness of the scope of the issue (a missing downstream GHG analysis) and FERC’s quick action to address it…the court may agree that good cause exists to stay the mandate 90 days,” ClearView said.

“…FERC’s quick action also reinforces our view that the court’s Aug. 22 ruling does not imply a significant threat to other pipelines pending approval at FERC, given that their” environmental review documents “included downstream GHG calculations.”