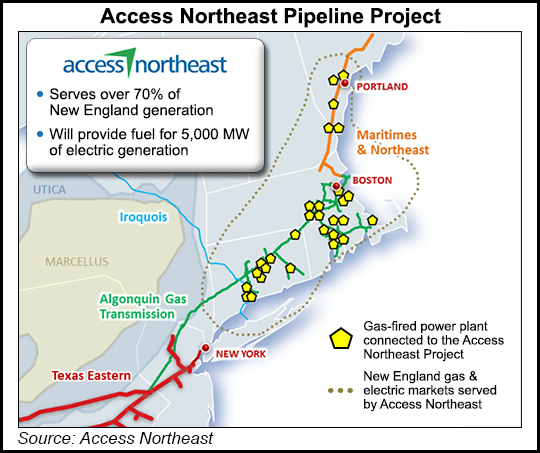 Algonquin proposed the capacity release waiver for its system as part of a tariff revision filed with the Federal Energy Regulatory Commission in February [RP16-618]. The waiver was part of a plan to allow electric distribution companies (EDC) owned by Eversource Energy and National Grid to contract for firm transportation capacity on Access Northeast and then release that capacity directly to New England generators through state-regulated electric reliability programs.

Eversource and National Grid have signed on with Spectra to co-develop Access Northeast, a roughly 1 Bcf/d brownfield expansion of Algonquin’s system [PF16-1].

One of the more controversial aspects of Algonquin’s revision sought to protect the EDC-owned capacity from open bidding requirements, which proved to be a sticking point with FERC. The Commission’s order said the prearranged releases contemplated by Access Northeast — a workaround to meet electric demand with new capacity when generators are unwilling to contract for long-term firm transport — would be allowed under existing rules as long as the generator is willing to pay the market rate.

While Algonquin had argued that the bidding exemption would make sure the capacity purchased by EDCs — and subsidized by ratepayers — served the intended purpose of meeting electric generation demand, FERC wasn’t persuaded.

“Under Algonquin’s proposal, any gas-fired generator to whom EDCs release capacity would be a prearranged replacement shipper. Therefore, pursuant to the Commission’s capacity release regulations, the gas-fired generator could retain the released capacity — consistent with the goal of the state-regulated electric reliability program — by matching the highest bid submitted by any other bidder,” FERC wrote.

“…Neither Eversource nor National Grid provided a persuasive explanation for why the ability to release capacity to a prearranged replacement shipper under our existing regulations is not sufficient to meet their needs. Moreover, neither party sufficiently explained why a generator that needed the capacity to obtain the natural gas supplies necessary to generate electricity during a period when Algonquin’s capacity is constrained would not match a higher bid.”

FERC, echoing critics of Algonquin’s proposed bidding exemption, made clear its view that such an exemption would be anti-competitive.

FERC did, however, approve part of Algonquin’s proposal, granting EDCs a bidding exemption to allow them to contract with third party asset managers to manage their capacity. EDCs “cannot qualify for the [asset management agreement] bidding exemption” under the Commission’s existing rules since they don’t “use or obtain natural gas” themselves, FERC wrote.

Spectra spokesman Creighton Welch told NGI via email that FERC’s Wednesday orders “are part of the permitting process, and we continue to move forward with Access Northeast in order to provide New England consumers with much needed access to affordable, reliable energy.

“Although FERC did not approve our request in its entirety, we’re pleased that the Commission said that it would indeed recognize a third party asset manager selected under a state electric program on behalf of EDCs as eligible for the Asset Manager bidding exemption,” Welch said.

“We will review with New England stakeholders, and if deemed necessary will return to the Commission with more targeted exemptions using an asset manager obligated to release EDC capacity under more clearly defined state programs.”

Also Wednesday, FERC dismissed a separate but related complaint filed against ISO New England Inc. by NextEra Energy Resources LLC and PSEG Companies [EL16-93]. The companies had sought to challenge the implementation of the state reliability programs contemplated in conjunction with Access Northeast, arguing that such programs would manipulate and suppress wholesale electric prices. FERC dismissed the complaint “without prejudice because it is not ripe for Commission review.”

Algonquin’s proposal set off months of debate at FERC over how best to address New England’s capacity-constrained winter heating seasons, which have seen significant price spikes in recent years. FERC even scheduled a technical conference in May to review the issue. Regional competitors owning electric and liquefied natural gas (LNG) assets argued that Algonquin’s proposal would artificially suppress prices. But Algonquin defended its plan as a way to improve reliability and accused critics of attempting to preserve the region’s price volatility for the sake of profits (see Daily GPI, June 29).

Adding another wrinkle to the debate, a Massachusetts Supreme Judicial Court order last month invalidated the state’s approval of EDC contracts for capacity on Access Northeast. While a major setback for the project in that state, Spectra has vowed to proceed (see Daily GPI, Aug. 24; Aug. 18).