FERC staff will prepare an environmental assessment (EA) for the Eastern Market Access Project and operation of facilities by Dominion Cove Point LNG LP (DCP), a subsidiary of Dominion Resources Inc., in Maryland and Virginia. 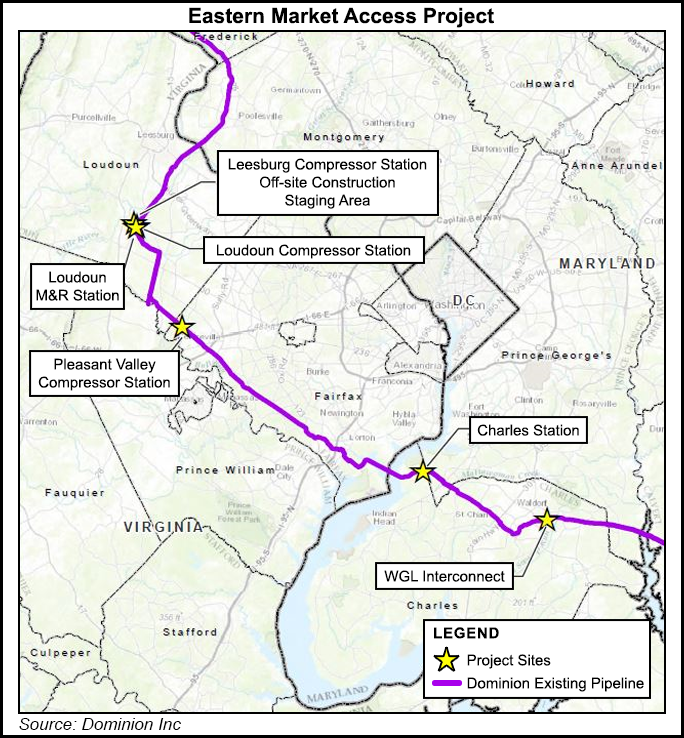 DCPfiled an application with the Federal Energy Regulatory Commission in November for the $147.3 million project, which calls for construction facilities and upgrades to existing infrastructure in Charles County, MD, and Loudoun and Fairfax counties in Virginia in order to provide 294,000 Dth/d of firm transport capacity to two utilities [CP17-15].

In its filing for an abbreviated application for a certificate of public convenience and necessity, DCP told FERC that two of its customers — Washington Gas and Mattawoman Energy LLC — had entered into binding precedent agreements for all of the project’s capacity. Washington Gas will use the supplies to support reliability and allow expansion of its distribution system. Mattawoman is planning to build a 990 MW combined-cycle gas-fired generating station, the Mattawoman Energy Center, in Prince George’s County, MD, about seven miles from the DCP’s Cove Point Pipeline.

The project also calls for re-wheeling a compressor on one existing 17,400 hp electric unit at DCP’s existing Pleasant Valley Compressor Station in Fairfax County, VA, and constructing two delivery taps — one on Pipeline TL-522, the other on Pipeline TL-532 — to serve as a new WGL interconnect in Charles County.

DCP proposed starting construction in November 2017 to meet an in-service date for the contracted firm transportation service by Sept. 1, 2018. The Dominion unit asked FERC to issue a final certificate order approving the project by September 2017.

FERC will accept comments on the project through March 17, and has scheduled a public scoping session in Waldorf, MD, for March 2.