FERC on Thursday issued a proposed rule that aims to speed up the process for linking new electric generation to the power grid. 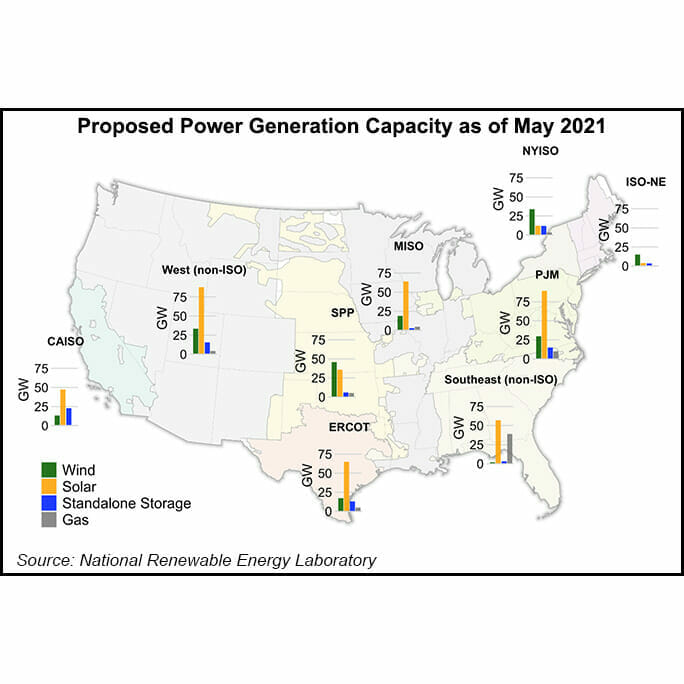 “We are witnessing unprecedented demand for new resources seeking to interconnect to the transmission grid, and queue delays are hindering customers’ access to new, low-cost generation,” Chairman Rich Glick said.

According to the Commission, more than 1,400 GW of generation and storage were in interconnection queues nationwide at the end of 2021.

“This is more than triple the total volume just five years ago,” FERC staff said. “Projects now face an average timeline of more than three years to get connected to the grid. As the resource mix rapidly changes, the Commission’s policies must keep pace.”

FERC said the inadequate planning has limited renewable generator access to the grid.

One reform under the NOPR would implement a “first-ready, first-served” cluster study process. The measure would have transmission providers perform larger interconnection studies covering “numerous proposed generating facilities” instead of running separate studies for each facility.

For the sake of timeliness, the first-ready, first-served system would also have transmission providers impose additional financial commitments and readiness requirements on interconnection customers.

The proposed rule would also set firm deadlines and establish penalties if transmission providers fail to complete interconnection studies on time, with the exception of force majeure situations.

The rule would also require transmission providers to allow more than one resource to co-locate on a shared site behind a single point of interconnection and share a single interconnection request, FERC noted.

“This would create a minimum standard that would remove barriers for co-located resources by creating a more efficient standardized procedure for these types of configurations,” said FERC staff.

Finally, the FERC proposal would update modeling and performance requirements for nonsynchronous generating facilities to accommodate the changing resource mix.

“For example, to ensure that non-synchronous resources are better able to support reliability, the NOPR proposes to require them to continue providing power and voltage support during grid disturbances,” said FERC staff.

Once the NOPR appears in the Federal Register, FERC would accept comments on the proposed rule for the next three months, with reply comments taken for another month.