Energy Transfer Partners LP’s Rover Pipeline has been ordered by FERC to suspend all horizontal directional drilling (HDD) work — except where drilling activity has already begun — pending a third-party review of a recent spill in Ohio. The news led natural gas futures traders on Wednesday to speculate on the possibility of a delay for the project. 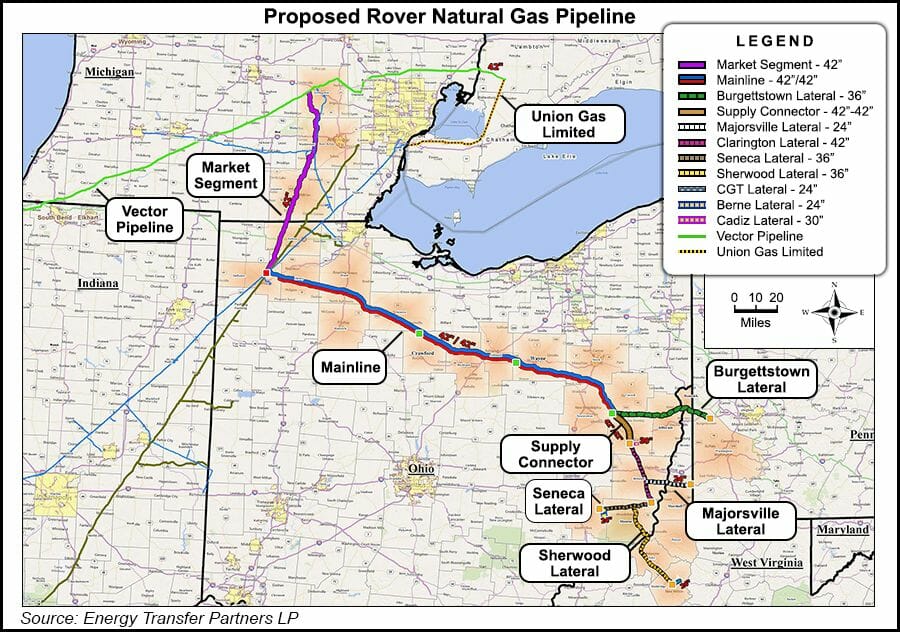 FERC staff said Wednesday it has “serious concerns regarding the magnitude” of the Tuscarawas HDD spill and is “prohibiting Rover from drilling activities where HDDs have not commenced.” The order affects multiple sites along Rover’s Sherwood, Clarington and Majorsville laterals, which connect to producing areas in Ohio, West Virginia and Pennsylvania, as well as three sites along its market segment, which runs from Northwest Ohio into Michigan.

FERC said it reviewed information related to the incident and conducted an on-site inspection.

“According to drilling logs, returns of drilling mud were absent or intermittent during the majority of the completion of: the pilot drill, the 30-inch diameter ream and the 42-inch diameter ream. This encompassed a period of nearly three weeks,” FERC wrote.

“During this period…Rover continued to advance drilling activities. Based on this information, as well as the volume, extent and condition of drilling mud in the wetland, staff has serious concerns” about the spill, “its environmental impacts, the lack of clarity regarding the underlying reasons for its occurrence and the possibility of future problems.”

FERC ordered Rover to obtain proposals immediately from independent third-party contractors to “assess the actions taken by Rover and its drilling contractor in attempting to prevent the release or identify it in a manner that could have avoided and minimized the extent of impacts…and to determine whether Rover’s actions were consistent with its HDD Contingency Plan.”

“Because the focus of this inquiry is on Rover’s HDD activities, other construction activities may continue at this time,” FERC wrote. “However, given our concerns regarding the environmental issues resulting from the significant release at the Tuscarawas River HDD, and our concerns regarding Rover’s environmental compliance oversight, we are requiring Rover to double the number of environmental inspectors per spread to ensure compliance along the entire construction right-of-way.”

FERC said “based on the outcome of the independent analysis, this matter may also be referred to the Commission’s Office of Enforcement for further investigation.”

Wednesday’s order led some to speculate about the potential for FERC’s review of the drilling spill to delay the project.

“At this time, there has been no change to the construction schedule,” Energy Transfer spokeswoman Alexis Daniel told NGI.

Still, the prospect of Rover’s capacity coming online later than anticipated stirred bullish sentiment in the futures market, with Nymex contracts through November adding around 6 cents each in Wednesday’s trading. The June and July contracts each added 6.5 cents to settle at $3.292 and $3.378 respectively.

Tom Saal, a broker for FCStone Latin America, told NGI that the news appeared to inspire traders to get out of their short positions.

“I was impressed with how much reaction there was,” Saal said. “I’ve been doing this quite a few years, and I was surprised at the amount of volume that was traded based off that news.”

Given that Rover is a project that will “rearrange the flow of gas in certain parts of the country,” he said FERC order was “a bullish piece of information, and the market reacted bullishly to it. Now we’ll see if it has sustaining power.”

Matt Hoza of BTU Analytics told NGI that the order “is certainly not a positive development for Rover. Segments of the project (Mainline B, Supply Connector B, Clarington Lateral) are integral for completion of Phase 1. So it seems like the timing is back in FERC’s hands, and they can move at whatever pace they deem necessary to identify the causes of the HDD spill and come up with future mitigation measures.

“On the positive side, Rover is allowed to continue with all other aspects of construction, so they can still continue to progress with other parts of the project,” Hoza added. “FERC has moved pretty quickly with some aspects of Rover in the past, so there is a possibility that this might not cause a material delay to the project.”

This is not the first time Rover has found itself in FERC’s crosshairs. In its February certificate order approving the project, FERC denied a blanket certificate for routine construction activities over Rover’s demolition of a historic home in Ohio near a proposed compressor station.

Rover acquired and demolished the home, which was eligible for historic preservation protections, without notifying FERC ahead of time. Commission staff subsequently reviewed the incident as a potential violation of the National Historic Preservation Act.

“Rover’s intentional demolition of the Stoneman House raises the question of whether Rover would fully comply with our environmental regulations in future construction activities under a blanket certificate,” FERC wrote at the time. For its part, Rover has challenged FERC’s rationale for denying the blanket certificate.