FERC on Tuesday issued certificates for three connected projects entailing construction of 685 miles of pipeline and 339,400 hp of compression to transport up to 1.1 Bcf/d of natural gas to power generation and other markets in Florida and the southeastern United States. 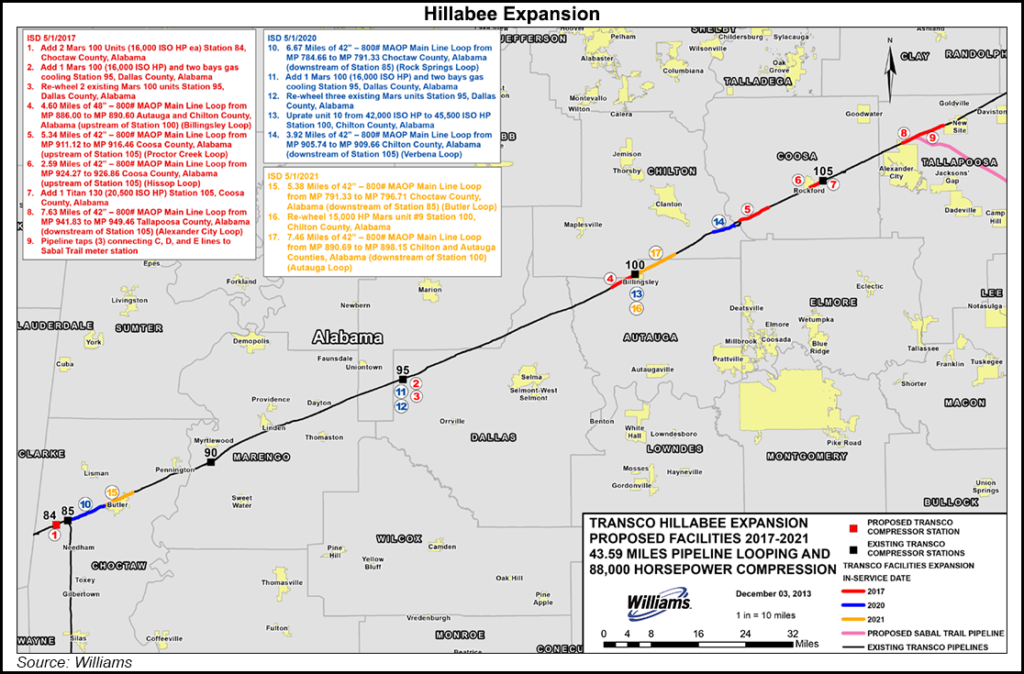 Hillabee is the upstream project of the three and would include about 43 miles of pipeline looping and 88,500 hp of compression at one new and three existing stations in Alabama. Sabal Trail would use the capacity created to provide up to 1.13 million Dth/d of firm service.

Sabal Trail, a project of Spectra Energy Corp. and NextEra Energy Inc., would include about 515 miles of pipeline, six compressor stations and six meter stations in Alabama, Georgia and Florida to provide up to 1.07 million Dth/d of firm service. Sabal Trail would lease from Transco the upstream capacity to be created by the Hillabee Expansion. The pipeline would extend from an interconnect with Transco in Tallapoosa County, AL, to an interconnect with Florida Southeast Connection’s project near Intercession City, FL. Sabal Trail would also connect with the Central Florida Hub, enabling it to deliver gas to the existing Gulfstream Natural Gas System and Florida Gas Transmission, which would enhance market competition, FERC said.

In the FERC proceeding, the project applicants argued successfully against formal consolidation of their projects. “Although the separate applications filed by Sabal Trail, Transco and Florida Southeast in the three proceedings raise similar issues, the existing records in the three dockets are sufficient for us to consider and address all three contemporaneously,” the Commission said. “…[W]e see no purpose in consolidating the three certificate proceedings in view of the fact that we address all issues in each proceeding in this order without need for an evidentiary, trial-type hearing.”

During the review process, the U.S. Environmental Protection Agency (EPA) had been a critic of Sabal Trail, finding fault with the project for potential impacts on wetlands as well as its route through areas with sensitive karst geology, which is prone to sinkholes (see Daily GPI, Oct. 28). However, last December EPA retracted most of its earlier comment in light of additional information it said it had received (see Daily GPI, Dec. 17, 2015).