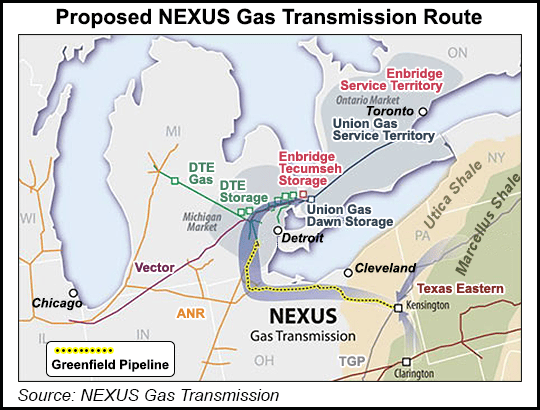 The order came the same day as the competing Rover Pipeline LLC received clearance from the Federal Energy Regulatory Commission to resume work at four horizontal directional drilling (HDD) locations where work had been stopped since May.

Rover and Nexus are not the only Northeast natural gas transmission projects to face regulatory setbacks in recent years. The regulatory climate has been particularly hostile for pipelines in New York, where developers have faced obstruction, an issue explored in NGI’s latest special report, Empire State Showdown: The NatGas Battle for New York.

FERC staff authorized Nexus to proceed with construction on the 255-mile project, excluding specific segments where the developer will need to submit additional information before work can start [CP16-22].

The 1.5 Bcf/d Nexus, a joint venture of Enbridge Inc. and DTE Energy Co., is one of several major greenfield Northeast takeaway projects scheduled to enter service over the next couple years. Unlike the 713-mile Rover, which received a federal certificate and began construction earlier this year, Nexus had to wait out a six-month quorumless stretch at FERC before receiving its certificate in August.

Nexus, designed to transport Marcellus and Utica shale gas westward into Midwest and Canadian markets, will have to make up for lost time, as the original November 2017 start-up date slips to next year.

Meanwhile, Rover, designed to serve many of the same demand areas, continues to progress toward bringing online its full 3.25 Bcf/d of capacity by the end of the first quarter. Last week Rover received FERC authorization to begin partial service on Compressor Station 1, and the pipeline has increased east-to-west volumes out of Cadiz, OH, from around 700 MMcf/d to just under 1 Bcf/d as of this week, according to NGI‘s daily Rover Tracker.

In the latest order, FERC staff said Nexus, which would cross through Ohio and into Michigan, would need to provide additional details on mitigation plans for a scenic trail crossing and for construction through karst topography along the route.

FERC also excluded HDD activities from its authorization. For Nexus, FERC specified that “prior to beginning any HDD operations, Nexus must file supplemental information…affirming that it will utilize a downhole annular pressure tool during the entire pilot hole drilling process and while reaming beneath sensitive environmental features (such as wetlands and waterbodies), or provide suitable alternative methods for monitoring the borehole annular pressure during reaming.”

The scrutiny over the Nexus HDD plans comes after after a roughly 2 million gallon drilling fluids spill that occurred earlier this year during a Rover HDD near the Tuscarawas River in Stark County, OH.

In a separate order Wednesday, FERC continued to roll back the moratorium issued following the Tuscarawas spill, authorizing Rover to resume HDD activities at four locations where work had previously been stopped.

FERC said it “verified that Rover has provided third-party independent inspectors to oversee the HDDs to further safeguard against future inadvertent releases to sensitive environmental features or contamination of drilling fluids utilized at HDD sites.”

FERC began lifting the HDD moratorium for Rover last month when it authorized work to resume at nine sites. That order included the Captina Creek HDD, required to complete a crucial supply lateral in eastern Ohio. The Commission’s Office of Enforcement is still investigating “the underlying causes” of the presence of diesel fuel in the drilling mud at the Tuscarawas HDD site, staff said.