FERC has given American Midstream LLC permission to begin construction of the Natchez Pipeline, which will replace the 90-year-old Midla pipeline system in Louisiana and Mississippi. 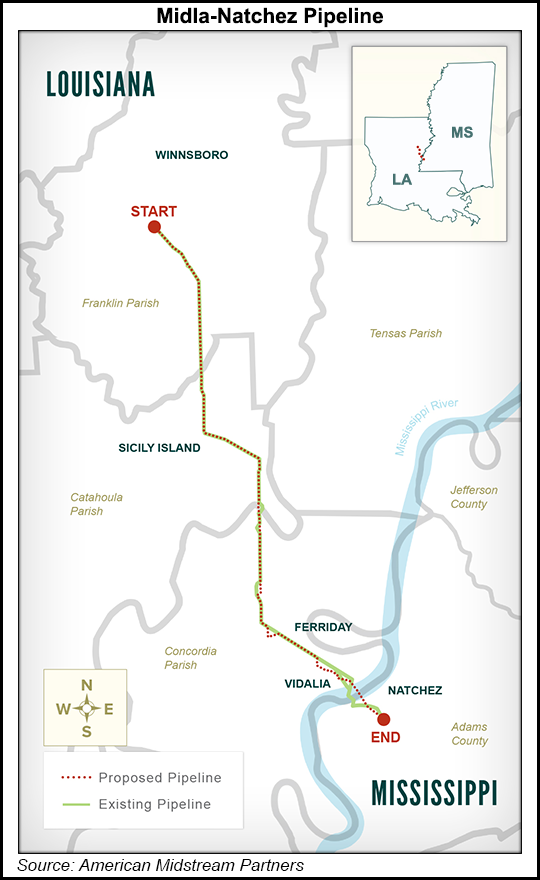 In a letter Thursday, David Swearingen, an official with the Federal Energy Regulatory Commission’s Office of Energy Projects, granted permission for construction to begin along most of the pipeline route. The authorization excludes a short list of sites where American Midstream needs to satisfy certain conditions to proceed, such as landowner approvals and various agency consultations.

According to the letter, the U.S. Army Corps of Engineers (USACE) has also granted limited approval for tree clearing within some wetlands under its jurisdiction. In those areas, American Midstream may clear vegetation through hand-cutting and felling trees, but may not uproot trunks or allow any dredged or fill materials to be discharged into the wetlands administered by the USACE.

The project [CP15-523] calls for construction of a 51.96-mile, 12-inch diameter pipeline originating near Winnsboro in Franklin Parish, LA. The pipeline will then traverse Franklin, Catahoula and Concordia parishes in Louisiana, cross under the Mississippi River and terminate in Adams County, MS, near Natchez. American Midstream will also construct a 0.5-mile, four-inch diameter lateral in Concordia Parish, located near milepost 46.81 of the mainline, to serve the city of Vidalia, LA.

The Natchez Pipeline will have three anchor shippers: Atmos Energy Corp., which serves the cities of Ferriday, Gilbert and Wisner, LA, and the city of Natchez, MS; the Louisiana Municipal Gas Authority, serving the municipal gas systems of Clayton, Jonesville, Sicily Island and Vidalia, LA; and BASF Corp., which has an industrial facility near Vidalia.

The company expects to have the Natchez Pipeline in service by November. FERC granted American Midstream authorization to construct and operate the pipeline last December (see Daily GPI, Dec. 17, 2015).

Debate over the fate of the antiquated Midla system began in earnest nearly two years ago, in March 2014, after negotiations between American Midstream and its customers over repairs to the system foundered and there was no interest to an open season (see Daily GPI, March 13, 2014). The company subsequently began decommissioning Midla, triggering the wrath of several key lawmakers, including U.S. Rep. Bill Cassidy (R-Baton Rouge) and U.S. Sens. David Vitter (R-LA), and Mary Landrieu (D-LA), who chaired the Senate Committee on Energy and Natural Resources (see Daily GPI, April 11, 2014; April 7, 2014).

American Midstream filed an application with FERC to abandon the Midla system on March 28, 2014. Despite Landrieu’s calls for FERC to reject the company’s proposal, the regulatory agency agreed to its request for a rehearing for further consideration (see Daily GPI, Sept. 16, 2014).

A settlement [RP14-638] over the dispute was reached with several parties in December 2014, and American Midstream’s subsequent application to FERC went uncontested (see Daily GPI, Dec. 15, 2014). An environmental assessment for the new pipeline was completed in November 2015 (see Daily GPI, Oct. 12, 2015).

Under the settlement, FERC agreed to allow American Midstream to abandon the Midla system, which includes about 370 miles of varying diameter pipeline and associated laterals from the Desiard Compressor Station in Ouachita Parish, LA, to a point near Scottlandville in East Baton Rouge Parish, LA. Meanwhile, the company agreed to continue to serve customers with delivery points from Winnsboro to Natchez through the new Natchez Pipeline. Once the new pipeline is complete, American Midstream will be able to abandon the Midla system, FERC said.

The 370-mile Midla system was built in 1926, traverses Louisiana and Mississippi, and was designed to move gas from the then-prolific Monroe Gas Field in Ouachita Parish, LA, to a Standard Oil (now ExxonMobil Corp.) refinery in Baton Rouge, LA. In the early to mid-1970s, the system carried up to 300 MMcf/d. The mainline consists of 16- to 22-inch diameter pipe.