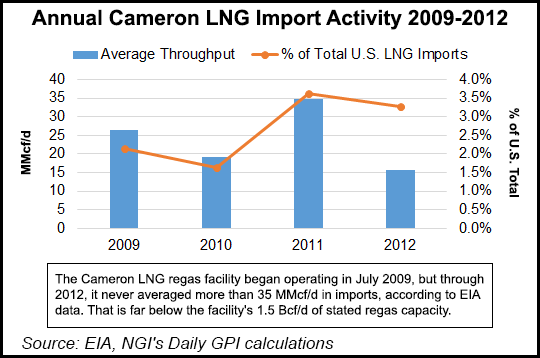 In 2011 Cameron LNG proposed adding liquefaction and export facilities to its existing import terminal in Hackberry, LA. The project is expected to cost $9-10 billion and will use many of Cameron LNG’s existing facilities. It will be composed of three liquefaction trains capable of exporting up to 12 million tonnes per annum (mtpa), or about 1.7 Bcf/d of liquefied natural gas (LNG). Construction is expected to start this year with full commercial operation in 2019, according to the project’s website.

The Federal Energy Regulatory Commission approval had been expected (see Daily GPI, June 13). Cameron has approval from DOE for exports up to its full capacity to all FTA countries. Its conditional authorization to export to non-FTA countries was granted by DOE on Feb. 11 (see Daily GPI, Feb. 11).

“This is a landmark project that will bring economic prosperity and create thousands of jobs in Louisiana,” said Sempra Energy CEO Debra L. Reed. “Today’s approval is another important step in delivering natural gas to America’s trading partners abroad.”

FERC also authorized a subsidiary of Sempra to construct a 21-mile, 42-inch diameter expansion of the Cameron Interstate Pipeline, a new compressor station and ancillary equipment that will provide gas transportation to the liquefaction facilities.

A final investment decision is yet to be made on the project. Sempra is to have an indirect 50.2% ownership interest in Cameron LNG and the related liquefaction project. The remaining portion will be owned by affiliates of GDF Suez SA, Mitsubishi Corp. (through a related company jointly established with Nippon Yusen Kabushiki Kaisha) and Mitsui & Co. Ltd., each with 16.6% stakes.

Last year, GDF Suez, Mitsubishi and Mitsui & Co. signed 20-year tolling capacity and joint-venture agreements to support the development, financing and construction of the project (see Daily GPI, May 17, 2013). The tolling agreements subscribe the full nameplate capacity of the facility. Each tolling agreement is for 4 mtpa.

Cameron LNG launched its financing process last year with the Japan Bank for International Cooperation, Nippon Export and Investment Insurance and commercial banks. Financing is expected to be secured later this year, a spokesperson told NGI on Thursday.

Work on liquefaction and export facilities is expected to begin later this year, but there is paperwork to come before that and parts to be ordered, Sempra LNG President Octavio Simoes told NGI in an interview earlier this month (see Daily GPI, June 9).

Much of the early work will take place off of the site in various factories and fabrication yards around the Gulf of Mexico and elsewhere, Simoes said. “That is the advantage of a brownfield site [such as Cameron] because the area where you have the greatest construction risk is the actual site; it is an uncontrolled environment compared to the fabrication yards where all of the machines and fuel handling is in place.

In March, CB&I and Chiyoda International Corp. were awarded the $6 billion engineering, procurement and construction (EPC) contract to build the facilities. Under a “limited notice to proceed” from FERC, the EPC firms since early May have been able to prepare equipment orders and engineering plans in anticipation of a final OK to build the project.

Gas turbines from General Electric will be made in the United States; refrigeration compressors from Nuovo Pignone will be assembled in Italy, and the main cryogenic heat exchange from Air Products & Chemicals will be U.S. produced, Simoes said.

This and other work at the site itself will now get under way once the financing is in place, said Simoes, who said major project challenges will be quality assurance of equipment and obtaining and maintaining a quality construction workforce. “There will be 3,000 employees at the height of construction, so keeping those people happy and not vulnerable to going to work elsewhere in the Gulf is an ongoing challenge.

“EPC contractors deal with workforce competition all the time. They build in incentive and retention programs to make sure the good welders, pipefitters and millwrights stay with the project to provide the continuity we need. Then, at the end, the challenge is commissioning, but that is something all good EPCs know how to do.”

“Cameron LNG will create thousands of high-paying jobs in Southwest Louisiana and will position America as an energy superpower,” said U.S. Sen. Mary Landrieu (D-LA).”The Department of Energy should follow FERC’s lead and issue the final [non-FTA export] approval for the project, and they should do so quickly so we can create 3,000 high-paying jobs in Southwest Louisiana.”

Project opponents have 30 days to seek a rehearing of the FERC order. ClearView Energy Partners LLC analysts said in a note Thursday that they expect DOE to consider lifting the conditions on Cameron’s non-FTA export authorization once the FERC rehearing period closes.

“We think it is reasonable to assume that the FERC would address rehearing [approval or denial] in a similarly expeditious fashion [to Cheniere Energy’s Sabine Pass in 2012] given the apparent need for a project applicant to conclude rehearing in order for the DOE to finalize non-FTA export authority,” ClearView said.

“Our review of the [FERC] order does not reveal any conditions that appear to pose a threat of any meaningful delay to moving into construction,” ClearView said. Additionally, the analysts wrote that approval process modifications proposed earlier this year by DOE (see Daily GPI, June 4; May 29) are unlikely to hold up Cameron.

The Cameron LNG regasification facility began operating in July 2009. However, through 2012 it never averaged more than 35 MMcf/d in imports, according to Energy Information Administration data. That is far below the facility’s 1.5 Bcf/d of stated regas capacity.

ClearView analysts are estimating that sometime during July-August FERC will decide on Dominion’s Cove Point LNG as well as Freeport LNG’s FLEX and FLEX Expansion. In October-November the analysts expect FERC to rule on trains five and six at Cheniere’s Sabine Pass, and then in November-December they anticipate a ruling on Cheniere’s Corpus Christi project.