Natural gas-fired electric generators made up a majority of the failures identified by FERC during an inquiry into the extreme cold weather that rattled power markets in Texas and the Midwest in February. 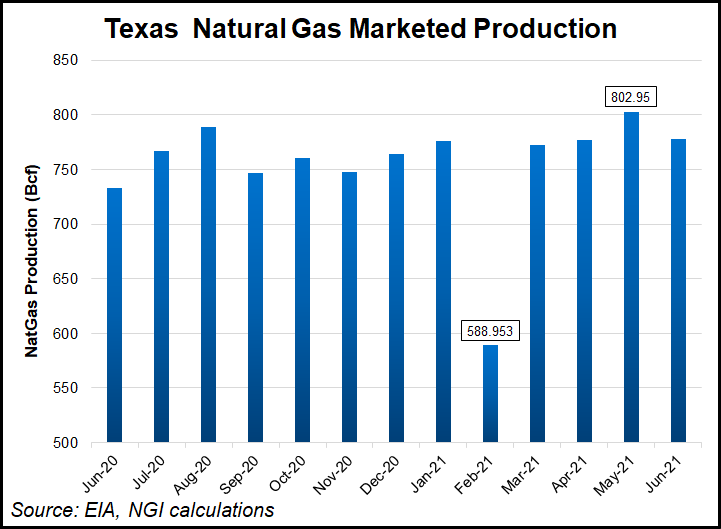 The Federal Energy Regulatory Commission, in a joint effort with the North American Electric Reliability Corp. (NERC), found freezing generator components and fuel issues as the two main causes of generator outages during the high-profile cold snap. Regulators called for stronger winterization efforts along with better coordination and planning from the electric and natural gas industries.

The intense wave of frigid temperatures, dubbed Winter Storm Uri, dove deep into the Lower 48, causing a host of disruptions to energy systems, especially in Texas.

Widespread blackouts and spiking energy prices occurred as temperatures plunged into the single digits in parts of Texas. FERC vowed at the time to investigate.

Uri triggered the loss of 61,800 MW of power, with 1,045 generating units experiencing 4,124 “outages, derates or failures to start,” according to the results of the preliminary report, released during FERC’s monthly meeting Thursday.

Natural gas production fell by around 50% versus pre-storm levels, with the most noticeable impacts in Texas, Oklahoma and Louisiana, FERC and NERC staff found.

Natural gas-fired units accounted for more than half (57%) of the 1,045 affected generating units, primarily a result of challenges obtaining fuel supply, according to the inquiry.

FERC Chairman Richard Glick called the results of the inquiry a “wake-up call” for the energy sector and vowed to put the lessons learned into action.

“There was a similar inquiry after Texas experienced extreme cold weather in 2011, but those recommendations were not acted on,” Glick said. “We can’t allow this to happen again. This time, we must take these recommendations seriously, and act decisively, to ensure the bulk power system doesn’t fail the next time extreme weather hits.

“I cannot, and will not, allow this to become another report that serves no purpose other than to gather dust on the shelf.”

In a tweet, Glick also used the results of the inquiry to rebut those that pointed to greater adoption of renewable energy in Texas as the culprit for the power system’s February failures.

The report “makes clear that the facts do not support the singling out of and bashing of renewable energy,” the chairman wrote.

FERC and NERC staff prepared a list of “key recommendations” for improving power market resiliency, with the focus generally on requiring better weatherization efforts from generators.

The report also recommends that generator owners have a chance to recover costs associated with retrofitting or building new equipment and that federal and state lawmakers, along with regulators, “require gas facilities to prepare and follow cold weather preparedness plans.”

The FERC and NERC recommendations “provide a roadmap for what actions need to be taken next in order to prevent a repeat occurrence,” NERC CEO Jim Robb said. “Our coordinated efforts — across both the electric and natural gas industries — will provide the way ahead. NERC and FERC are committed to working together to make this happen.”