The Fifth Circuit Court of Appeals once again remanded to FERC the circuitous case involving the jurisdictional status of a very small pipeline run by the Jupiter Energy Corp., owned by Unocal, which carries Unocal’s gas from a platform in the Gulf of Mexico in Vermilion Block 39 off the Louisiana coast to connections with Transcontinental Gas Pipe Line and Tennessee Gas Transmission.

The Federal Energy Regulatory Commission has twice determined the line to be a jurisdictional transmission line, earning back-to-back remands from the Fifth Circuit, the latest occurring on Friday, March 16. The question of the jurisdictional status of the line has been batted around FERC since 2002 when Jupiter first filed to qualify as an exempt gathering line. FERC decided that since Jupiter carried gas from an aggregation point on Platform 39A and did not aggregate any gas itself, it was a transmission rather than a gathering line.

On appeal the Fifth Circuit pointed out that some of the gas from Jupiter was delivered downstream into a Transco gathering line and therefore Jupiter could not be classified as a transmission line. It remanded the case. FERC fixed it by issuing an order asserting jurisdiction over the Transco line, making it also a transmission line; it then reaffirmed its jurisdiction over the Jupiter line (see Daily GPI, Nov. 7, 2005). The District of Columbia Court of Appeals subsequently overturned the Transco determination (see Daily GPI, Dec. 20, 2006).

The justices noted the non-physical factors also should have been weighed, including the fact that the line carries only the gas of parent company Unocal, which if it was declared a gathering line would integrate it into the rest of its production and gathering operations. “In light of these non-physical factors, the Commission should at a minimum provide a reasoned explanation of why Jupiter’s lines fail to constitute an ‘integral part of [Unocal’s] natural gas gathering system.'” 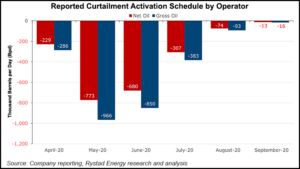 Nearly all of the curtailed U.S. onshore oil volumes shut-in as Covid-19 hampered demand are set to return by the end of the third quarter amid stronger oil prices and a generally brighter market outlook, according to a new analysis by Rystad Energy. The Oslo-based consultancy analyzed the curtailment reactivation schedules of 25 publicly traded…