FERC invoked its emergency authority Friday under the Interstate Commerce Act to help alleviate “dangerously low” propane supplies to consumers in the Midwest and Northeast. 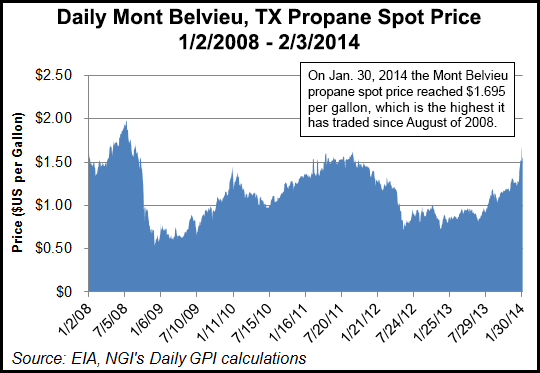 “We’re mindful of the emergency situation that has developed in parts of the country where bitter cold weather has created problems for consumers who need supplies of propane,” said Acting FERC Chairman Cheryl LaFleur. “The problem is acute enough that we feel it is important for us to take this step.”

FERC said Friday’s order was the first time it had used its emergency authority under the Interstate Commerce Act. Section 1(15) of the Act states that whenever the Commission believes an emergency requiring immediate action exists in any section of the country, it has authority to give directions for preference or priority in transportation, embargoes or movement of traffic.

The National Propane Gas Association urged FERC to act last Thursday because it takes two to three weeks for propane to travel from Mont Belvieu to storage facilities in the Midwest and Northeast via Enterprise TE. The organization said additional supplies must begin flowing immediately to avoid critical shortages at the end of February.

Propane shippers said that while Enterprise TE provides a direct route from Mont Belvieu to propane storage facilities in the Midwest and Northeast, the current state of proration on Enterprise TE is limiting its ability to deliver the fuel where it is needed. They asked FERC to alter the pipeline’s allocation schedule and immediately give priority in transportation to up to 75,000 b/d through the first week of March, or when the emergency is resolved.

The current shortage is a result of numerous factors. Most directly, severe winter weather in December and January followed immediately after a strong crop-drying season (see Daily GPI, Jan. 30).

On Jan. 30, the Mont Belvieu propane spot price reached $1.695 per gallon, which is the highest it has traded since August 2008.

On Monday, U.S. Rep. Bruce Braley (D-IA) sent a letter to President Obama, asking him to invoke the International Emergency Economic Powers Act and limit the amount of propane being exported.

“We are facing a propane emergency within the U.S. that can be partially attributed to an increase in exports,” he wrote, according to the Des Moines Register. “The Midwest’s supply of propane fell to 8.789 million barrels at the end of January, the lowest it has been in recent history.

“Iowans should not be freezing in their own homes while we export American propane to heat homes in other countries.”