Nearly three years after Dominion Transmission Inc. first filed to build the New Market Project in upstate New York, FERC has given the company permission to begin its construction. 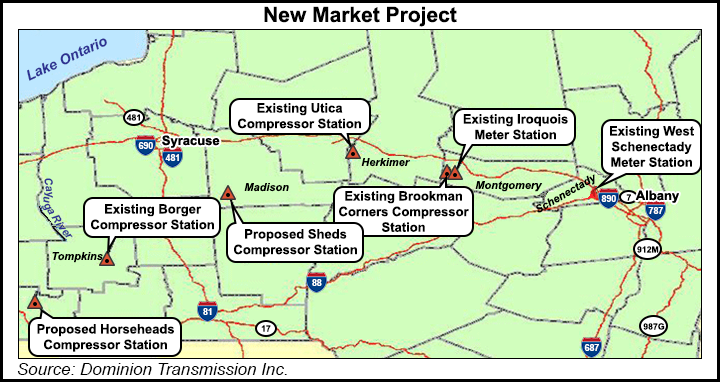 In a letter order Friday, the Federal Energy Regulatory Commission said Dominion could start construction of the $159 million project, which will provide 112,000 Dth/d of firm transportation service, improve access for two National Grid subsidiaries, and add more than 33,000 hp of compression [CP14-497].

Specifically, Dominion plans to build two new compressor stations — in the Town of Georgetown in Madison County and the Town of Veteran in Chemung County — with 10,880 and 11,010 hp, respectively. At its existing Brookman Corners Compressor Station in the Town of Minden, in Montgomery County, an additional 11,133 hp will be added.

Dominion will also add or make upgrades to existing metering and regulating stations along its existing transmission pipeline, and add gas coolers at its existing Brookman Corners, Borger and Utica compressor stations.

The path to get the project approved has been a long one. Dominion first began looking for customers in fall 2013, then filed at FERC the following June. At that time, Dominion requested approval by last April 2015, which would have allowed construction to begin in September 2015 with service by November 2016. FERC issued an environmental assessment for the project in October 2015.

But it took FERC 23 months to approve the project, which it did April 2016. Dominion said it expects the bulk of construction to take place this summer, with the project being placed into service during 4Q2017.