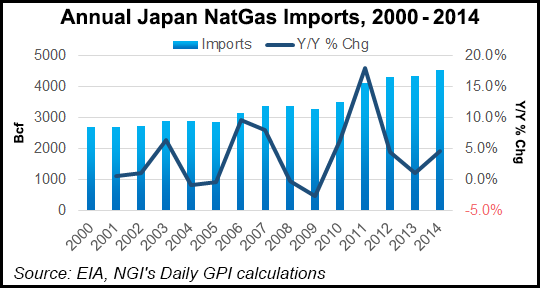 The Federal Energy Regulatory Commission in March rejected the proposed project, which would be sited on the south-central coast of Oregon (see Daily GPI, April 11; March 14). FERC cited problems with the Pacific Connector pipeline link to tap Western Canada and U.S. Rockies supplies, as well as the project’s lack of contracts.

“The Commission needs more time to consider the arguments in the Jordan Cove case, so it issued a so-called tolling order,” a FERC spokesperson told NGI. In the order, FERC said it would grant or deny the requests for rehearing, but the spokesperson said there is no time limit for action.

During a conference call last week to discuss first quarter results, Veresen CEO Don Althoff said since FERC’s initial rejection two months ago, Jordan Cove has “demonstrated a high level of commercial interest,” securing term sheets for up to 50% of the project’s 1 Bcf/d capacity and 75% of the Pacific Connector capacity in binding transportation agreements. The rehearing request in part is based on the recent commercial deals.

“In the meantime, we continue to make progress on the Jordan Cove terminal, and we think the project continues to remain attractive to buyers even in the context of today’s global LNG dynamics,” Althoff said. “Jordan Cove is directly competitive with brownfield U.S. Gulf Coast projects for LNG delivered to Tokyo Bay.”

The project team had no forewarning of FERC’s rejection in March, Spomer said. The remaining 25% capacity in the connecting pipeline should be signed up by the end of this year, but 75% should be enough to satisfy FERC, she added. FERC usually requires signed contracts backing up a project and Jordan Cove did not satisfy that requirement initially.

The terminal agreements represent several key long-term commercial criteria, including price, said Spomer. The company now is working to turn the transactions into binding, long-term contracts. She did not divulge the parties in discussions for the remaining 50% terminal capacity.

“We are working with Japanese utilities and trading companies, and we’re getting a lot of support from Japanese agencies, so we think of ourselves as a kind of Japan project,” she said.