New England power generators will be held responsible for outages based on their economic decisions not to line up deliveries of natural gas or other fuel, but will not be liable if they can demonstrate the fuel/transportation is unavailable, according to a mixed ruling issued by FERC in response to a complaint filed by the New England Power Generators Association (NEPGA).

NEPGA had alleged that ISO-New England (ISO-NE) “impermissibly reinterpreted its Transmission, Markets and Services Tariff to impose a firm fuel obligation on all resources with capacity supply obligations through the forward capacity market” when it suggested last year that generators must be available to provide power to the day-ahead market, even in cases where the ISO has not issued a day-ahead commitment. ISO-NE had said it had not altered its tariff and does not require firm fuel.

In an order issued Tuesday, the Federal Energy Regulatory Commission agreed with ISO-NE in part, finding “that the tariff imposes a strict performance obligation on capacity resources and that capacity resources may not take economic outages, including outages based on economic decisions not to procure fuel or transportation.” Not procuring natural gas or transportation simply because the price is too high is a violation of the tariff, FERC said. But the Commission also agreed with NEPGA’s contention that a generator that finds fuel or transportation unavailable can be excused from fulfilling its generation obligations.

“However, the Commission also grants the complaint in part, finding that, under the tariff, a demonstrated inability to obtain natural gas or transportation may legitimately affect whether a resource is physically available,” the order said.

The Interstate Natural Gas Association of America (INGAA) said in a FERC filing that it was not taking a position on whether ISO-NE’s tariff requires firm fuel obligation, but it said the proceeding “highlights the ISO’s legitimate concern that the collective result of generators’ actions has resulted in a redirection in electric reliability and a greater risk of blackout…” New England, especially western New England, suffers from natural gas pipeline capacity limitations, INGAA said.

“The transportation services that interstate pipelines do and can provide are part of the solution to enhanced reliability in New England, not part of the problem underlying reliability concerns or NEPGA’s complaint,” INGAA said in its filing.

Natural gas has become the fuel of choice of power generators operating in the seven independent system operators (ISO) and regional transmission organizations (RTO) across the nation, and demand is expected to grow (see Daily GPI, May 17). New England, in particular, has become heavily reliant on natural gas.

ISO-NE and the five other participating planning authorities of the Eastern Interconnection Planning Collaborative recently issued a request for proposals to conduct an analysis of natural gas infrastructure and its interfaces with the electric grid within their combined footprints (see Daily GPI,Aug. 5). Study results are expected to help improve gas-electric coordination to ensure electric system reliability.

In May, the North American Electric Reliability Corporation (NERC) released a follow-up assessment in which it raised concerns about the ability of an increasingly natural gas-dependent bulk power system to maintain reliability when the capacity to deliver gas supplies to generators is constrained (see Daily GPI, May 23). In its original December 2011 report, NERC said the biggest obstacle to electric and natural gas industry cooperation was the structural differences between the industries (see Daily GPI, Dec. 27, 2011). 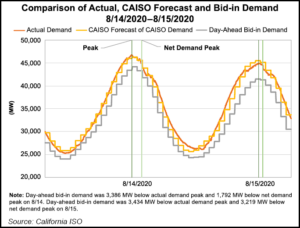