FERC has issued a presidential permit and granted authorization for Valley Crossing Pipeline LLC to construct and operate a 2.6 Bcf/d cross-border natural gas pipeline between Texas and Mexico, where it would be used for power generation and industrial customers. 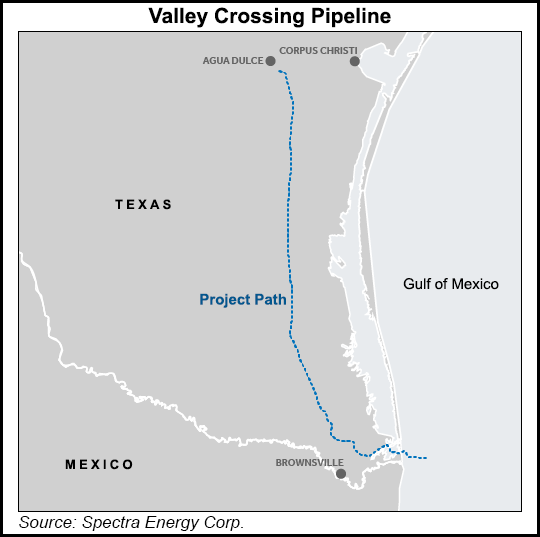 In an order Monday, the Federal Energy Regulatory Commission authorized Valley Crossing, a subsidiary of Enbridge Inc., to build about 1,000 feet of 42-inch diameter pipeline extending from a point in Texas state waters, about 30 miles east of Brownsville on the Texas border, to the international border with the Mexican state of Tamaulipas, in the Gulf of Mexico [CP17-19].

According to the order, the pipeline would be placed by an anchored pipe-lay barge and buried about three feet under the seafloor using a jetting sled. Valley Crossing told FERC that Infraestructura Marina del Golfo S. de R.L. de C.V. (Marina), an unaffiliated Mexican pipeline, would construct about 500 miles of pipeline on the Mexican side of the border, with an interconnect at a facility at the Port of Tuxpan.

Marina is a joint venture between TransCanada Corp. and Infraestructura EnergÃ©tica Nova S.A.B. de C.V. (IEnova), the latter a subsidiary of Sempra Energy. The JV’s 2.6 Bcf/d project, known as the Sur de Texas-Tuxpan pipeline, is expected to come in service during 2018.

Valley Crossing is currently building 165 miles of 42- and 48-inch diameter of upstream, intrastate pipeline in Texas. The new pipeline is to extend southwest from a header system in Nueces County, near the Agua Dulce Hub near Corpus Christi, to the proposed border-crossing facility, which would be subject to the jurisdiction of the Railroad Commission of Texas. Two compressor stations, multiple meter stations and ancillary facilities are also under construction.

FERC said it disagreed with the Sierra Club’s contention that the Valley Crossing Pipeline should be subject to the Commission’s jurisdiction under Section 7(c) of the Natural Gas Act (NGA) because the pipeline would transport gas in interstate commerce once it is placed into service.

“Nothing in the record supports Sierra Club’s premise,” FERC said. “Rather, the record shows that Valley Crossing’s pipeline will be located entirely in Texas and, when it begins service, it will only transport Texas gas production received from other Texas intrastate pipelines or processing plants within Texas or to the proposed border-crossing facility.

“The mere existence of a physical interconnection with an interstate pipeline is not sufficient to bring an intrastate pipeline under the Commission’s jurisdiction, since being capable of receiving interstate gas is not the same as actually receiving it. Since Valley Crossing will initially neither receive nor transport any gas flowing in interstate commerce, the Valley Crossing Pipeline is not subject to the Commission’s jurisdiction under Section 7 of the NGA.”

However, FERC stipulated in an environmental assessment (EA) of the project that Valley Crossing has to consult with the National Marine Fisheries Service, a division of the Commerce Department’s National Oceanic and Atmospheric Administration, before constructing the cross-border section of the pipeline. The EA stipulation was made to ensure protection of sea turtle habitat.