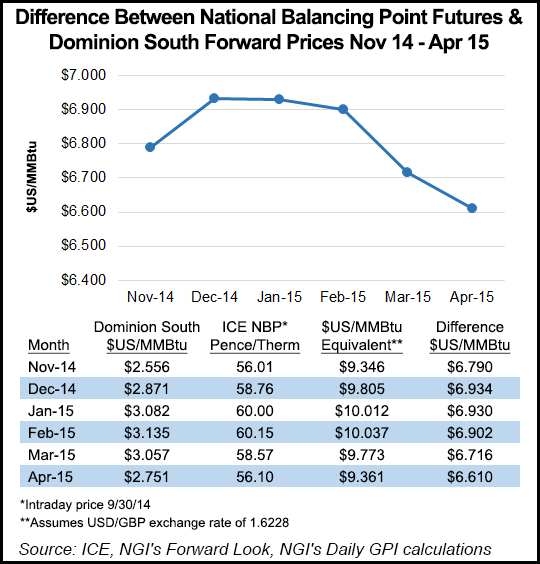 Authorization of the Cove Point Liquefaction Project comes more than two years after Dominion proposed the project to the Federal Energy Regulatory Commission (FERC), during which federal regulators heard from more than 140 people at three public meetings related to the environmental assessment and received more than 650 comments from the public, as well as federal, state and local agencies on the application (see Daily GPI, June 17; May 15; March 3).

The project would enable Dominion to transport up to 860,000 Dth/d from existing pipeline interconnects near the west end of the Cove Point pipeline to its terminal to export up to 5.75 million tons/year (0.8 Bcf/d) of LNG.

“This order is based on more than two years of thorough, exhaustive analysis by FERC along with numerous other federal and state agencies,” said Dominion Energy President Diane Leopold. “It also reflects a robust public input process. Dominion is dedicated to constructing a safe, secure, environmentally compatible and reliable export facility.”

Dominion now is tasked with reviewing and accepting FERC’s order. Once the review is completed, Dominion expects to file an implementation plan describing how it will comply with the conditions set forth. Dominion expects to ask FERC for a notice to proceed at that time and plans to begin construction when the notice is received. This process, from Dominion review through FERC’s notice, is expected to take several weeks, the company stated.

With its June 2012 pre-filing application, Dominion notified FERC that it was planning to add export capability at the Cove Point terminal in Lusby, MD. FERC has been researching and analyzing the proposal since then. Dominion filed its application in April 2013 and, with supplemental filings, it now totals more than 21,000 pages. In May, FERC issued a 241-page environmental assessment of the project that showed it could be built and operated safely with no significant impact to the environment.

Dominion Cove Point could begin service in June 2017 under its proposed plan. Construction of the related Virginia facilities is slated to start in 2016 and could begin service by March 2017. The U.S. Department of Energy (DOE) already has approved Dominion’s application to export LNG to free-trade and non-free trade agreement countries (see Daily GPI, Sept. 12, 2013).

The Cove Point project should create “thousands of skilled construction jobs, 75 permanent jobs and an additional $40 million in annual tax revenue to Calvert County,” according to Dominion. “Other economic benefits included millions of dollars of new revenues for Maryland and the federal government as well as a reduction in the nation’s trade deficit by billions of dollars annually.”

The proposed export facility would be within the 131-acre footprint of the existing LNG terminal site, which has been in Calvert County on the western shore of the Chesapeake Bay for nearly 40 years, Dominion noted. No new pipelines or storage tanks are needed at the facility.

“Cove Point has been a good neighbor to the region and to the Chesapeake Bay for almost four decades and we expect that record to continue,” Leopold said. “Initially, Cove Point helped the United States overcome what was then an energy shortage. Now that our nation is developing a burgeoning surplus of natural gas, Cove Point can help send a small portion of that surplus to allied nation’s looking for stable supplies of clean energy, supporting economic development and replacing coal as a fuel.”

Should everything proceed according to plan, “we believe you could see Cove Point fully up and running by 2018, but execution risks abound in the land of LNG (70-80% of projects late/over budget in last decade),” said TPH’s team. “Four export projects have passed FERC approval process with cumulative nameplate capacity of more than 7 Bcf/d.”

ClearView Energy Partners LLC analysts in a note Tuesday said they assume environmental organizations and other opponents of Cove Point “are likely to seek rehearing” of the order, but “we continue to expect that the Department of Energy (DOE) is likely to lift the conditions once the rehearing process has run its course…”

“Marcellus producers likely would be licking their chops if the Cove Point export facility were currently operational, since they could potentially take advantage of the difference between Appalachia prices and those in the United Kingdom,” said Patrick Rau, NGI Director of Strategy & Research. “NGI estimates that gas at the National Balancing Point is currently trading anywhere between a $US6.60 and $US6.93/MMBtu premium to prices into Dominion South through April of 2015.

“Such a premium would have to be high enough to cover the cost of transporting Appalachian production to Europe, of course, but production from the U.S. East Coast would have the advantage of having a relatively straight shot across the Atlantic Ocean,” he added. “That would give Marcellus gas an edge over Gulf Coast production, everything else being equal.”

Under Section 3 of the Natural Gas Act, FERC authorizes siting and construction for onshore and near-shore LNG import or export facilities. Section 7 of the Natural Gas Act authorizes FERC to issue certificates of public convenience and necessity for LNG facilities engaged in interstate natural gas transportation by pipeline. As required by the National Environmental Policy Act, FERC prepares the environmental assessments/impact statements for proposed LNG facilities under its jurisdiction.