In a split decision Friday, FERC issued a certificate of public convenience and necessity to Spire STL Pipeline LLC (Spire) for its proposed 65-mile, 400,000 Dth/d natural gas transmission project to tap supplies from the Rockies Express Pipeline (REX) for delivery into the St. Louis metropolitan area. 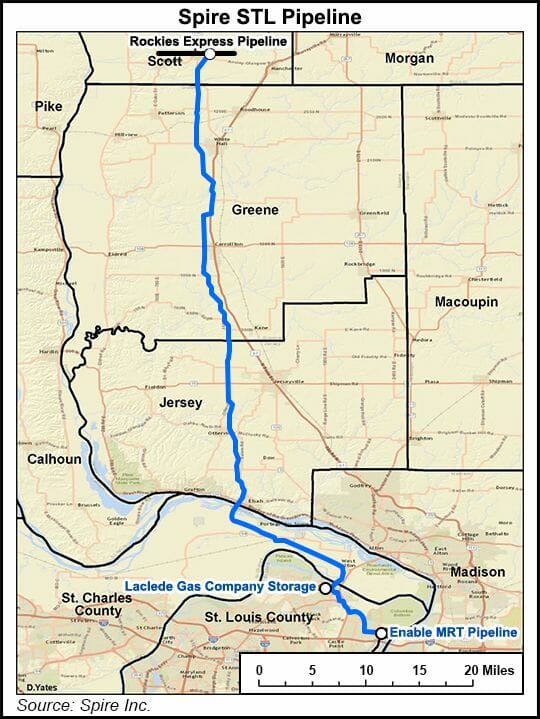 The Federal Energy Regulatory Commission voted 3-2 to issue the certificate to the project, which would extend from an interconnect with REX in Scott County, IL, to interconnections with Spire Missouri Inc. (Spire Missouri) and Enable Mississippi River Transmission LLC (MRT) in St. Louis County, MS. Spire Missouri, an affiliate of Spire, was the only shipper to commit to the project during an open season held in August 2016, signing a binding precedent for 350,000 Dth/d under a 20-year term, FERC documents show.

As they have in other recent proceedings, Democratic Commissioners Cheryl LaFleur and Richard Glick dissented, siding with a number of entities that had filed in protest of the pipeline, a list that included MRT, the Missouri Public Service Commission (PSC), the Environmental Defense Fund, and electric utility Ameren.

The protestors had argued that Spire had failed to show adequate need for the project, pointing to the affiliated nature of the Spire Missouri precedent agreement, the lack of new demand in the St. Louis market and the ability of existing infrastructure to meet the project’s purposes, among other issues.

These issues seemed to resonate with LaFleur and Glick, who have not been afraid to voice their dissent during natural gas infrastructure reviews as of late.

“The Spire Project is the unusual case of a pipeline application that squarely fails the threshold economic test,” LaFleur wrote in a separate opinion attached to Friday’s order. “The record does not demonstrate a sufficient need for the project. The Spire Project has a single precedent agreement with Spire Missouri, its local distribution company affiliate, and will force duplicative gas transportation capacity into a regional market of flat demand, shifting gas supply away from an existing pipeline and adversely impacting rates for the existing pipeline captive customers.”

LaFleur argued that FERC should have looked more closely at claims that the additional capacity on the Spire project would lower costs by enhancing “reliability and diversity of gas supply.”

Glick similarly questioned the need determination for the Spire pipeline.

“The record in this proceeding is patently insufficient to make these determinations, as there is neither evidence that the Spire project is needed nor that its limited benefits outweigh its harms,” he said. “…I am particularly disappointed with the order because it lends credence to the critique that the Commission does not meaningfully review” applications under Section 7 of the Natural Gas Act (NGA).

“…My point is not that precedent agreements are completely irrelevant to the determination of need,” Glick continued. “But where the parties have raised considerable, credible concerns about whether a precedent agreement is, in fact, a reliable indicator of need, reasoned decisionmaking requires the Commission do more than simply reiterate its policy of accepting precedent agreements at face value.”

The latest ideological sparring at FERC comes as Commissioner Kevin McIntyre has initiated a review of the agency’s decades-old policy governing the certification of new pipeline infrastructure.

As Republican Commissioner Robert Powelson gets set to leave the Commission for a new role as CEO of the National Association of Water Companies, the willingness of LaFleur and Glick to openly question FERC’s approach to reviewing natural gas infrastructure raises the prospect of a deadlocked agency split along party lines. Powelson has said he plans to leave FERC later this month.