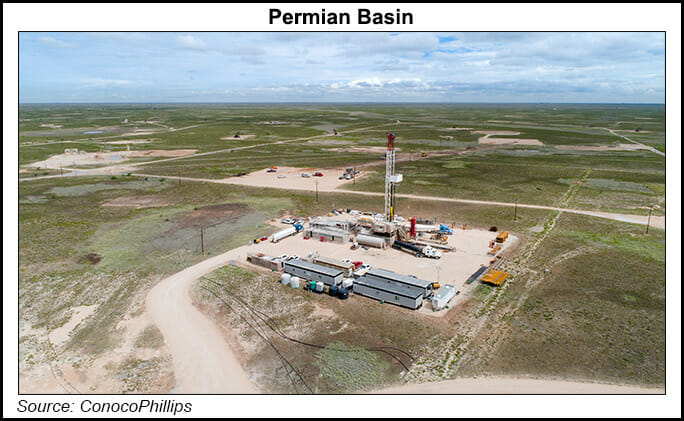 Continued efficiency improvements are expected to be critical for natural gas and oil producers in the Permian Basin this year as cost inflation for oilfield services (OFS) takes full effect.

“Already in early 2021, we started getting some reports about a labor shortage,” Abramov told NGI. It started with the trucking segment, “and that’s always the first sign of upcoming cost inflation.”

Privately held E&Ps, meanwhile, “warmed up” service rates in 2021 as they continued to add drilling rigs throughout the year, capitalizing on high oil and gas prices while their publicly traded counterparts maintained capital discipline, Abramov said.

For 2022, though, public E&Ps will have no choice but to accept higher OFS prices, Abramov said.

“We see potential for inflationary pressure not just in 2022 budgets but also in 2023/24 budgets in part due to the need to incentivize further rig/stimulation crew adds.”

Rystad, for its part, expects cost inflation alone to drive an estimated 15% year/year increase in drilling and completion costs for Lower 48 operators in 2022, Abramov said.

ConocoPhillips CEO Ryan Lance said in November during the 3Q2021 conference call that inflation impacts were likely to be felt most acutely in the Permian heading into 2022. However, because of the Houston-based independent’s scale and sophisticated supply chain network, “we think we have a way to mitigate quite a lot” of the inflationary pressure.

Inflation impacts should be offset somewhat by efficiency gains, which in recent years have been saving the industry an estimated $3-4 billion annually, according to Rystad.

The Goldman team highlighted efficiency improvements by Permian heavyweights such as Devon Energy Corp. Since the first quarter of 2018, Devon has “reduced total company operating costs by 23% driven largely by a 34% reduction in Permian operating costs over the same time period,” analysts said. “We believe further cost improvement above our base case estimate is possible through efficiency gains, which could drive higher free cash flow (FCF) generation relative to our expectations…”

EOG Resources Inc., meanwhile, “is targeting flat well costs in 2022 as a result of continued operational efficiencies and having [roughly] 50% of well costs already secured for the year,” the Goldman team said.

What Is Driving Permian Efficiency Improvements?

Simultaneous fracture or “simul-frac” drilling, which entails stimulating two horizontal wells at the same time, is among the primary factors driving efficiency gains.

“It’s a relatively new concept, it’s still in the pilot phase I would say,” but in 2021 “almost every significan operator in the Permian tested simul-frac at least on one project,” Abramov said. He said that while the technique does not improve well productivity, it dramatically reduces completion times on the well pads where it is used.

As the technique becomes more widely adopted, it should partially offset cost inflation in the Permian next year, Abramov said.

Pioneer Natural Resources Co.’s J.D. Hall, executive vice president for operations, said the firm is seeing “significant efficiency gains” as a result of simul-frac, but noted the technique requires access to ample water infrastructure. He said Pioneer “will continue to add simul-frac fleets as our water infrastructure grows, and we’ll adopt it as it makes sense from a capital perspective.”

“Obviously during any downturn producers are forced to do more with less,” Longanecker told NGI, “so they have become very efficient through that inevitable volatility that operators experience in this industry.”

While employment numbers in the Texas oil and gas industry may not return to 2014 levels, “I think we’re going to continue to see an uptick on a monthly basis in employment as the industry recovers,” Longanecker said.

“The Texas economy continues to rebound and the upstream sector’s addition of two thousand-plus jobs every month for the past six months is a prime example of how critical this industry is to the state’s recovery,” Staples told NGI. “These jobs pay among the highest wages in Texas and the activity of this industry supports communities across the state, whether you live in the oil patch or not.”

What Areas Of Permian Are Most Attractive?

The Midland sub-basin in West Texas, and the western portion of the Delaware sub-basin in southeastern New Mexico, are considered the most attractive portions of the Permian these days, according to Abramov.

The eastern Delaware has, in Rystad’s view, “been reclassified from Tier One to Tier Two acreage in the last year,” Abramov said.

Permian pure-plays such as Pioneer and Diamondback Energy Inc. are therefore focusing efforts on the Midland, Abramov said. After its acquisition of Parsley Energy Inc., Pioneer sold Parsley’s former Texas Delaware acreage to Continental Resources Inc. in a $3.25 billion deal.

For Continental, Abramov said, the objective was to secure long-term inventory. While the legacy Parsley acreage may not be “tier one” Permian acreage, it can nonetheless compete with much of Continental’s portfolio in the Bakken Shale and Midcontinent.

On the mergers and acquisitions front, Abramov said the “consolidation story in general is not over. We’ll still see some large deals, some large announcements” in 2022. He explained that consolidation among publicly traded firms is being offset by a resurgence in privately held exploration and production (E&P) firms capitalizing on high oil and gas prices.

Abramov expects large Permian E&Ps to expand their portfolios by acquiring private producers in 2022 “because now they can actually afford it from a cash flow situation [and] it fits well into their general corporate strategy.”

E&Ps To Ramp Up Spending?

Even before Covid-19, a business model transition was well underway for Lower 48 E&Ps, which pivoted from maximizing production to focusing on shareholder returns. The pandemic merely accelerated the trend, according to Abramov.

“So today, all large independents…operate with exceptionally low reinvestment rates,” he said, citing that many are now allocating only 30-40% of cash flow from operations into capital expenditures. The historical average for the U.S. shale segment is above 130%, according to the Oslo-based consultancy.

For 2022, “they really plan to continue with these disciplined spending programs,” Abramov said, although the change in business model “is not necessarily permanent.”

Lower 48 producers will need to see a meaningful drawdown of global crude oil in storage and a full post-pandemic recovery of oil demand to dramatically ramp up spending, Abramov said.