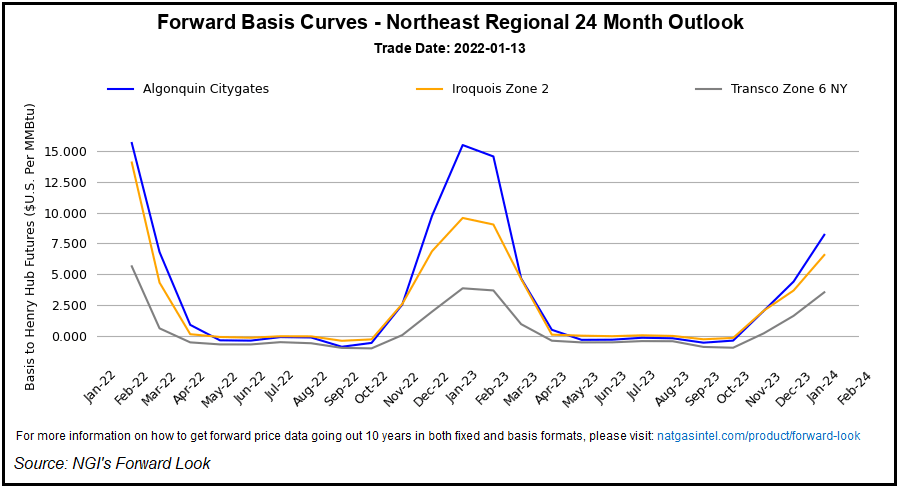 In addition to expectations for bitter cold and snow over the weekend in swaths of the Midwest and East, NatGasWeather said the “coming pattern for Jan. 20-27 is still easily the coldest so far this winter season, as very strong demand arrives over the northern and eastern” sections of the Lower 48.

What may have aided selling Friday futures was a tilt in both the American and European weather models that showed frigid air beginning to abate in the final days of the month, the firm said.

“The natural gas markets are seemingly expecting cold air to fade Jan. 28-29,” NatGasWeather said. That noted, “if cold were to linger” through the end of the month, “it could provide support” for prices.

Other catalysts, meanwhile, held firmly in place to close the week.

Elevated demand for U.S. liquefied natural gas (LNG) continued to undergird futures. Limited Russian flows of gas to Europe this winter amid political turmoil deepened an energy crisis on the continent and bolstered demand for American shipments of the super-chilled fuel.

Assuming normal weather this winter, Wood Mackenzie Vice President Massimo Di Odoardo said at current levels of Russian exports, European storage inventories would drop to a record low by the end of March, even with U.S. LNG in the mix there. An exceptionally cold winter in Europe could push inventories “close to zero” by the spring, he said.

The commissioning of the Nord Stream 2 (NS2) pipeline – currently tied up in regulatory delays amid Russian strife with Ukraine – may prove the only option to refill storage and avoid a repeat again next winter, Odoardo said. The project’s future is in limbo. In the meantime, he said, calls for U.S. exports are sure to remain at lofty levels through the heating season.

Meanwhile, U.S. production remained light early this year relative to late 2021 highs because of freeze-offs in key gas-producing basins. Bloomberg estimated production at 94.5 Bcf on Friday, off about 2.5 Bcf from last year’s peak.

With more frigid temperatures on the way, EBW Analytics Group senior analyst Eli Rubin said further production interruptions loom. “The possibility of late-month freeze-offs remains a crucial wild card,” he said. “The cooling in the January weather forecast over the past three weeks, particularly for the last third of the month, has led to the coldest outlook since the 2014 Polar Vortex.”

The harsh weather combined with strong LNG demand and modest production point to the potential for four straight 200-plus Bcf withdrawals of gas from storage, Rubin said, “with a strong physical market providing support for the February contract.”

That predicted string of robust pulls would follow a hefty 179 Bcf withdrawal from U.S. storage facilities during the week ended Jan. 7. The latest U.S. Energy Information Administration (EIA) print, issued Thursday, left stockpiles at 3,016 Bcf for the period, 2.4% higher than the five-year average but down 6.2% from year-earlier levels.

The latest withdrawal indicated a tight underlying supply/demand balance, according to Wood Mackenzie analyst Eric Fell. “Compared to degree days and normal seasonality, a 179 Bcf withdrawal appears tight by 2.8 Bcf/d versus the prior five-year average,” he said.

On a weather-adjusted basis, analysts at Tudor, Pickering, Holt & Co. (TPH) estimated the market was more than 4 Bcf/d undersupplied for the week, “with supply trending materially lower week/week as demand picked up.”

The firm estimated a 14 Bcf/d week/week increase in residential/commercial demand, or 1.95 Bcf/d above the five-year average.

“On the supply front, investor questions have focused on the degree of freeze-offs in recent trends as supply has remained muted to kick off the year” in the 93-94.5 Bcf/d range after sustaining “eye-catching” output above 97 Bcf/d in late 2021, the TPH analysts said.

The Northeast remains “the largest component of the trend lower in volumes, down more than 2 Bcf/d since late December peak levels in the 35.5 Bcf/d range,” the analysts said.

Spot gas prices spiked in the East on Friday ahead of a cold front, lifting the national average.

NatGasWeather said Friday a strong weather system with areas of snow was expected to sweep across the central and eastern United over the weekend, ushering in subzero lows in northern markets and lows in the 20s elsewhere for strong demand. The system had already set up over the Upper Midwest on Friday, with snow and highs in the teens.

NatGasWeather expected a mild break over most of the country early in the week ahead, with highs of 30s to 70s. However, the firm added, frigid Arctic air should advance into the northern and eastern United States late in the week with lows ranging from minus 20s to the 20s “for very strong demand.”

From there, the forecaster said, “very cold air will spread across the eastern half,” including at times “chilly lows of 10s and 30s into the southern U.S.”

The West Coast and Southwest, however, are expected to be mostly mild in the second half of January “as high pressure rules with highs of 50s to 70s,” the firm added.