The U.S. Energy Information Administration (EIA) on Thursday reported a withdrawal of 31 Bcf natural gas from storage for the final week of 2021. The result fell far short of the midpoint of analysts’ estimates and punctuated market concerns about weather-driven demand. 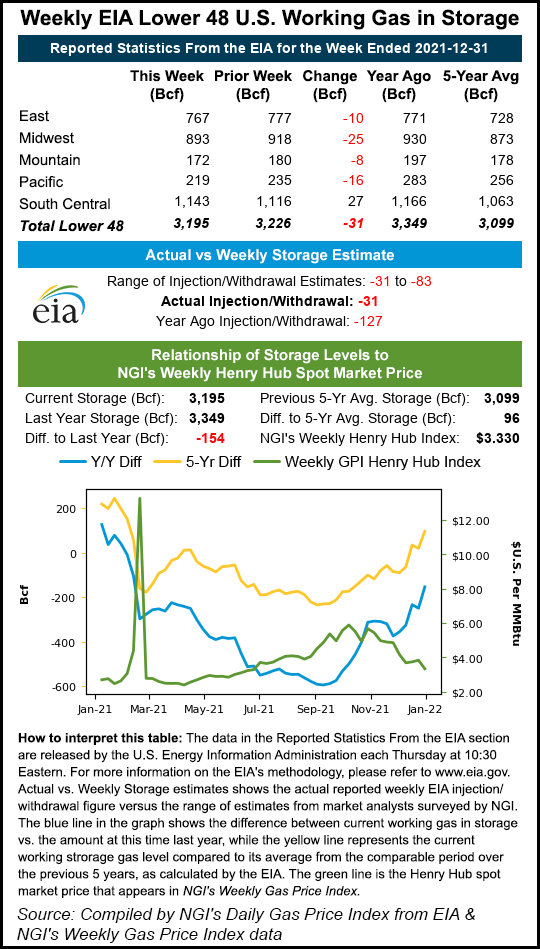 The result was “super-duper bearish,” as one participant on The Desk’s online energy platform Enelyst put it.

NatGasWeather said a “perfect combination” of factors minimized the withdrawal rate for the period. These included “much warmer than normal temperatures over most of the U.S.” and “weak demand due to the Christmas holiday week,” the firm said. In addition, there was strong wind generation in the power sector, lighter export demand and stronger domestic production, the forecaster said.

Prior to the report, responses to a Reuters poll ranged from withdrawals of 83 Bcf to 31 Bcf, with a 50 Bcf median. The median of 10 estimates submitted to Bloomberg’s survey was a 53 Bcf withdrawal, with expectations ranging from minus 76 Bcf to minus 39 Bcf.

NGI’s model predicted a 50 Bcf pull for the report. In the year-earlier period, EIA recorded a 127 Bcf withdrawal, while the five-year average is a 108 Bcf pull.

“Holiday weeks are always tricky, but this one also featured very low demand, with record warmth for much of the Midwest and South,” Bespoke Weather Services said, noting that it had expected a pull roughly in line with the median of major polls. “How did we miss by so much? We felt there was actually enough heat in parts of the South so that cooling demand would have more impact than it actually did, apparently. In terms of the supply/demand balance, it looks very loose in our model.”

The Midwest posted a decrease of 25 Bcf to lead all regions. The Pacific followed with a withdrawal of 16 Bcf. EIA recorded a 10 Bcf pull for the East and an 8 Bcf decrease for the Mountain region.

The South Central, meanwhile, posted an increase of 27 Bcf. This included a 21 Bcf injection into salts and a 6 Bcf addition to nonsalt facilities.

Despite the winter injections in the South and the overall modest pull, Bespoke said heftier withdrawals lie ahead. Freezing January air and snow has permeated much of the Midwest and the East this week, and another round of wintry conditions is expected by mid-month. The forecaster projects triple-digit pulls with each of the next three EIA storage reports.

“We would not read much into a super low demand holiday period, and the market is suggesting this as well, not moving much, as bearish risks appear to have been priced in,” Bespoke said in a note shortly after the EIA data was released.