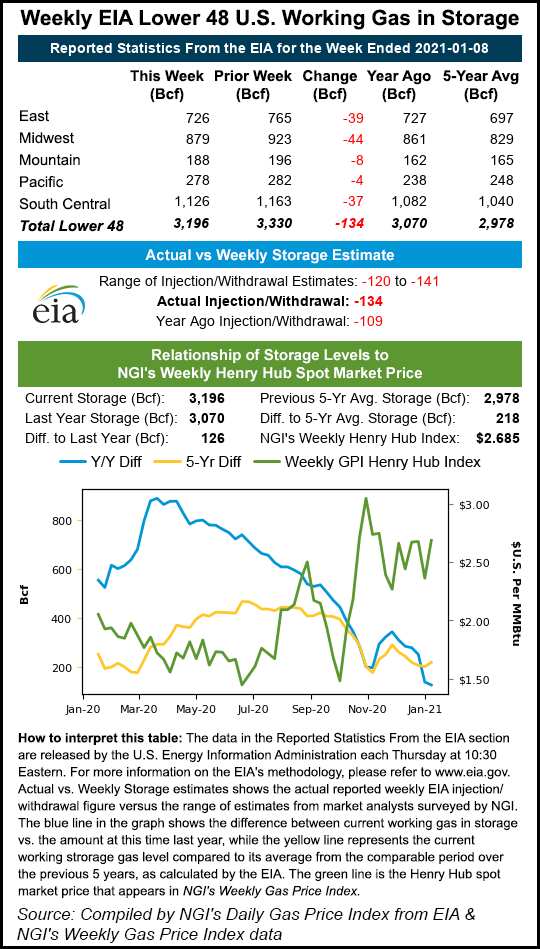 NatGasWeather said data in both the domestic Global Forecast System (GFS) and the European model had shifted warmer this week and presented “a rather bearish pattern through Jan. 21 with only modest cold shots into the U.S.”

The firm continues to expect frigid temperatures in late January across the interior West and Midwest, but the likelihood of such conditions advancing deep into the East or toward the South diminished when compared to forecasts earlier in the week. This lowered the odds of strong national heating demand in coming weeks and weighed on gas futures.

“The latest GFS still shows colder air eventually reaching the Great Lakes and Northeast Jan. 25-28, but we think this period is also subject to warmer trends in time,” NatGasWeather said.

Outside of domestic weather, catalysts for futures were lining up nicely.

The U.S. Energy Information Administration (EIA) on Thursday reported a withdrawal of 134 Bcf from natural gas storage for the week ended Jan. 8, eclipsing both the year-earlier pull and the midpoint of analysts’ estimates.

A Bloomberg survey ahead of the EIA report found estimates ranging from withdrawals of 120 Bcf to 141 Bcf, with a median 129 Bcf decrease. NGI modeled a 130 Bcf withdrawal for this week’s report, equal to the pull reported for the week ended Jan. 1.

Energy Aspects analysts said “a return of industrial demand (up 0.8 Bcf/d week/week) and exports to Mexico (up 0.3 Bcf/d week/week) after the holiday season” helped drive the latest reduction in underground gas stockpiles.

Strong and steady U.S. LNG export levels during the covered week provided added demand. LNG volumes, boosted by robust north Asia demand amid harsh winter conditions, hovered above 11 Bcf and near record levels most of the EIA covered period, NGI data show. LNG volumes dipped lower early this week but were back near 11 Bcf on Thursday.

Wood Mackenzie analysts on Thursday noted Asian LNG prices have recently traded above $20.00 amid supply shortages, making U.S. prices attractive and setting the stage for steady LNG demand even well after the depths of winter subside.

“Much of the LNG price spike has been driven by cold weather, supply disruption and lack of shipping capacity, and delays at the Panama Canal,” Wood Mackenzie Vice President Massimo Di Odoardo said. “Fundamentals have been playing a role too, with Asian LNG demand in Q42020 already at pre-coronavirus levels…Asian LNG demand in 1Q2021 will remain strong, paving the way for additional demand for LNG stocking in the summer across North Asia.”

ClearView Energy Partners LLC agreed that, with Asian gas prices swollen, demand from densely populated cities in South Korea, China and Japan for U.S. LNG could fuel ongoing support for benchmark prices in the United States and alleviate any concerns about storage surpluses. The firm calculated that heating-degree days from Nov. 1 thru Jan. 10 were above year-ago levels in Seoul by 13%, in Beijing by 9% and in Tokyo by 6%.

The overseas demand could cut into relatively high U.S. storage levels for this time of year. The pull for the Jan. 8 week reduced inventories to 3,196 Bcf, but they remained high compared to the year-earlier level of 3,070 Bcf and the five-year average of 2,978 Bcf.

In the latest EIA report, the Midwest and East regions, which have experienced winter storms and bouts of freezing temperatures, led all other regions with pulls of 44 Bcf and 39 Bcf, respectively, according to EIA. The South Central followed with a withdrawal of 37 Bcf.

Spot gas prices tumbled Thursday, led lower by steep drops in the Northeast. Temperatures on Thursday were chilly, but not by January standards.

EBW Analytics Group analysts noted that, while weather-driven demand this week is light for this time of year, models point to multi-day, widespread cold arriving around Jan. 23. Next-day cash prices could begin to climb steadily next week in anticipation of that potential surge in winter weather.

“In our view,” the EBW analysts said, “the natural gas market is underestimating the potential impact of colder weather on cash prices.” By late next week, “day-ahead demand could rise by as much as 15 Bcf/d, strengthening cash prices considerably and providing a strong bullish catalyst for futures.”

A weather system arrives in the Midwest Thursday afternoon, bringing high winds and snow to the Upper Plains and chilling rains to the Chicago area. Prices at Chicago Citygate advanced 1.0 cent to $2.640.

NatGasWeather expected the rain and snow to extend from the Great Lakes to the Southeast on Friday, providing “a minor bump in demand, although countered by mild conditions over the rest of the United States.” Most of the country, the firm said Thursday afternoon, “will be mild and dry the next few days with highs of 30s to 50s across the northern U.S. and 50s to 70s across the southern U.S. for light national demand.”