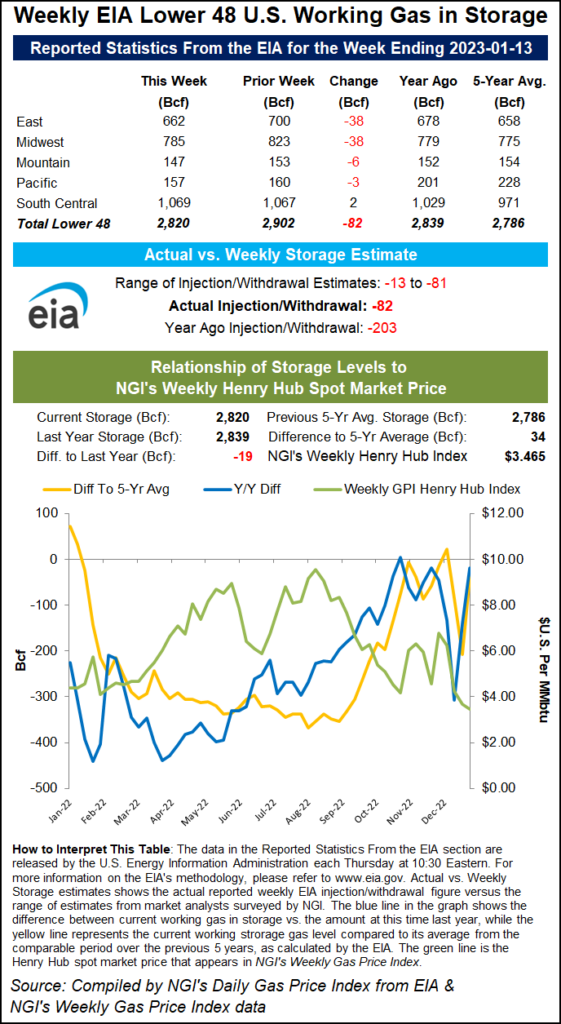 Production through most of January to date has held above 100 Bcf/d – close to record levels – while weather across most of the Lower 48 proved mild, dampening heating demand. The combination resulted in a rare January injection of 11 Bcf reported for the first week of the new year, and this was followed by a relatively modest withdrawal for the week ended Jan. 13.

The U.S. Energy Information Administration (EIA) on Thursday reported a storage decrease of 82 Bcf for the second week of January.

While major polls found analysts looking for a withdrawal in the 70s Bcf, the EIA result compared bearishly with a five-year average draw of 156 Bcf and a year-earlier pull of 203 Bcf.

“Demand has significantly underperformed,” said one analyst on the online energy platform Enelyst. “Essentially, the need for storage has gone way down.”

The decrease for the Jan. 13 week lowered inventories to 2,820 Bcf but left stocks above the five-year average of 2,786 Bcf.

Looking ahead to the next EIA inventory report, analysts are generally expecting another modest pull relative to recent years.

Early estimates for the week ending Jan. 20 submitted to Reuters ranged from withdrawals of 67 Bcf to 87 Bcf, with an average decrease of 78 Bcf. The projections compare with a decrease of 217 Bcf a year earlier and a five-year average decline of about 185 Bcf.

McClain noted that weather forecasts called for colder weather and near-normal temperatures in the final week of January, and this should result in an “uptick” in demand. Still, the outlook is uncertain, leaving the demand picture for February murky and futures under pressure.

McClain joined a chorus of analysts who said the return of the Freeport LNG plant in Texas could prove a market-moving event – if it happens anytime soon, that is.

Executives at the liquefied natural gas plant, which was sidelined last June by a fire, reiterated in recent days they hope to relaunch by the end of this month. Freeport executives have said they intend to ramp up to 2 Bcf/d of capacity within weeks, with full restoration to 2.38 Bcf/d to follow in the spring. If that were to happen, Freeport’s draw from domestic supplies would help offset demand weakness elsewhere, analysts said.

However, regulatory hurdles caused reopening delays late in 2022, leaving the market skeptical about a timely return to service early in the new year.

“Market participants have struggled for months to unravel the restart mystery,” McClain said. “The plant’s regulatory approval status remains clouded, increasing concerns over the facility extending the restart timeline yet again,” potentially to March or later. This would leave “ample” supplies of gas for the domestic market.

EBW Analytics Group said Thursday producers could begin to scale back, given the dearth of demand. This would be a gradual process, though, and it carries the risk of undersupply if Freeport were to come back online soon and new LNG plants begin to open next year.

Physical prices dropped across the nation’s midsection and the West Thursday. Mild weather and modest demand, combined with price corrections at volatile hubs in California and in the Rocky Mountain region, pushed the national average lower.

Elsewhere, declines were much less pronounced, though hubs in other parts of the country have far less room to fall. Chicago Citygate slid 5.0 cents to $2.935 and El Paso Permian in West Texas shed 29.5 cents to $1.945.

Prices in the East proved the exception on Thursday, with Algonquin Citygate near Boston leading the charge and rising $2.190 to $5.430.

More demand-friendly conditions may lie ahead.

The latest 11- to 15-day forecast from Maxar’s Weather Desk Thursday indicated a pattern that would result in warmer temperatures for the South but below-normal conditions from the West to the Midwest.

For the six- to 10-day, however, Maxar observed disagreement in the weather models.

“Below-normal temperatures are mostly steady in the Interior West, and in the wake of low pressure tracking from the South to the East Coast are below-normal temperatures in Central during the mid-period,” Maxar said. “The models diverge during the second half,” with the Global Forecast System model pulling “colder air into the Midwest and South when compared to its Euro counterpart.

“Our forecast takes the middle ground, but confidence is lowered…as a result of the diverging solutions.”